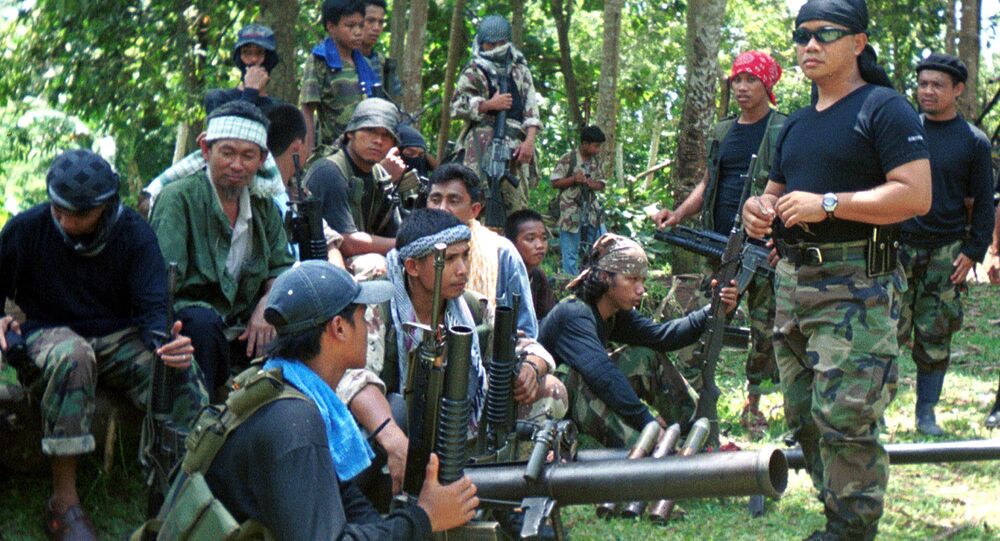 The Philippine authorities are verifying reports that a German man who survived 52 days of imprisonment in Somalia has been beheaded by a local Daesh-affiliated terror group called Abu Sayyaf.

© AP Photo / Philippine Coast Guard
Pirates Attack Again in Philippines, Killing One and Kidnapping Seven
German citizen Jurgen Kantner, 70, is thought to have been beheaded by Abu Sayyaf, according to Presidential Peace Adviser Jesus Dureza. The reports of his demise have not yet been verified, though, and the rescue operation will continue, the country's officials insist.

"Despite efforts exerted by groups and the security forces, I have received reports about the alleged beheading of a German kidnap victim in Sulu Sunday afternoon," Dureza said in a statement Sunday night.

"Joint Sulu Task Force commander informed me by phone that validation efforts of such report are still ongoing as of 8:30 pm, Sunday," he added.

Other Philippine officials confirmed receiving similar informal reports, but could not either prove or deny them.

According to Colonel Edgard Arevalo, the head of the military's public affairs office, the country's security forces were still "on search-and rescue" mode, working until they could determine what really happened to Kantner.

According to Restituto Padilla, spokesman for the Philippines armed forces, "Until sufficient proof is obtained… our assumption remains that the subject kidnapped victim is alive and well. Do not believe invalidated information going around until proven otherwise."

In the meantime, the country's armed forces are continuing with an offensive operation against the group.

"The armed forces will pursue the enemy and dictate the terms — not the other way around," Padilla said, according to DW. "The operations are not only aimed at rescuing hostages, but also to significantly degrade enemy capabilities."

© REUTERS / EZRA ACAYAN
Duterte Ready to Resign If Opposition Senator Proves Illegal Wealth Accumulation
Kantner was kidnapped by the Al-Qaeda affiliate terror group Abu Sayyaf, when he reportedly cruised a dangerous area in Philippines with his wife, Sabine Merz. Merz was reportedly shot on sight as she tried to defend herself with a shotgun. Abu Sayyaf issued a video of Kantner saying they would behead him unless a $600,000 ransom was paid to the group.

The couple had already been kidnapped once in 2008, by Somali pirates; that time, they were held captive for 52 days and were freed after a six-figure ransom was paid, according to media reports.

Abu Sayyaf is a Muslim terror group that seeks to build an "Islamic State" within the Philippines and beyond. On July 23, 2014, Abu Sayyaf leader Isnilon Totoni Hapilon swore an oath of loyalty to Abu Bakr al-Baghdadi, the leader of Daesh. The group was targeted by the US War on Terror for 13 years from 2002 to 2015 during Operation Enduring Freedom — Philippines. It continues to operate on a number of smaller islands in the Sulu Sea and from a small part of a larger island of Mindanao. The group has become notorious for kidnapping foreigners for ransom.