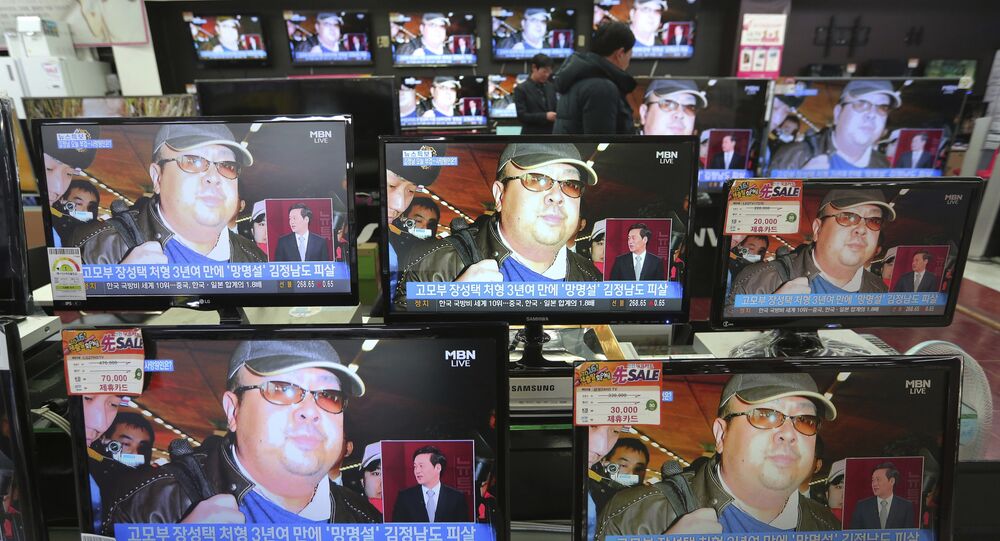 TOKYO (Sputnik) — Earlier in the day, Malaysian police established the traces of a lethal substance VX nerve agent, classified as a weapon of mass destruction by the United Nations, on the face of a North Korean national killed in the Malaysian airport.

"[South Korea] couldn't suppress its dismay over the fact that a chemical weapon was used in murdering a human… Recalling the United Nations' prohibition of chemical weapons under any circumstance, the government will respond (to the issue) jointly with the international community because the latest action constitutes a blatant violation of the CWC [the Chemical Weapons Convention] and related international standards," the ministry said, as cited by the Yonhap news agency.

© AP Photo / Ahn Young-joon
Who Killed the North Korean Leader's Half-Brother? Possible Versions and Speculations
On February 13, a North Korean national, traveling under the name of Kim Chol, was killed by two women using a poisonous substance at the Kuala Lumpur International Airport. According to media reports, it was Kim Jong Nam, an elder half-brother of incumbent North Korean leader Kim Jong Un, what was later confirmed by police.

Earlier this week, Malaysian authorities said that they were working with Interpol to apprehend alleged accomplices in the murder of Kim Jong Nam. Ambassador of North Korea to Malaysia Kang Chol called for a joint Pyongyang-Kuala Lumpur investigation, but Malaysian police said Kuala Lumpur opposed the move and called on Pyongyang to transfer four suspects in Kim's killing. Meanwhile, the DNA tests of the murdered man have not been carried out yet, the investigation is underway.