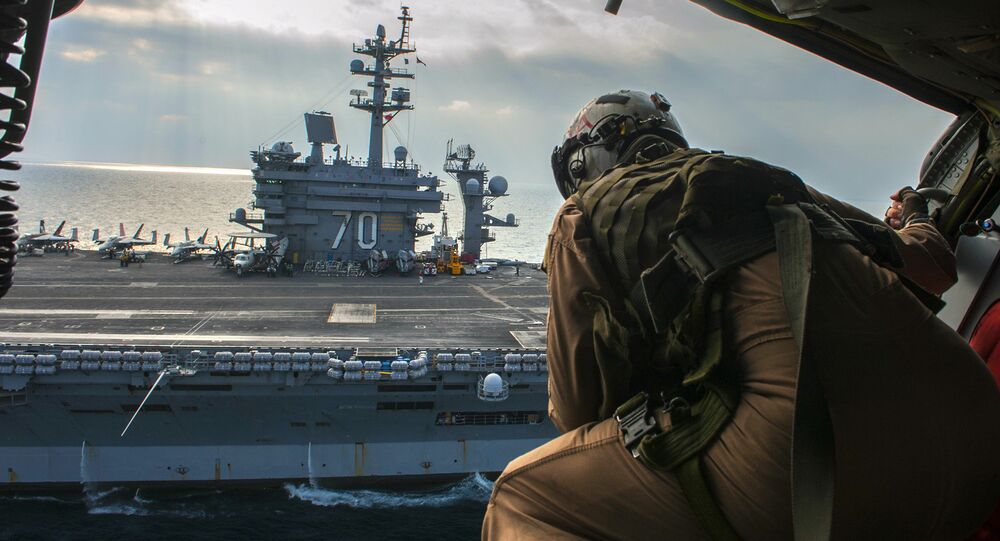 The temperatures are rising in the South China Sea over the recent deployment of a US naval group and further reports that China "has nearly finished" buildings "that could house missiles." Political analysts suggest that it’s the US' geopolitical game in the region, aimed at pressuring not only China but the ASEAN countries as well.

© AP Photo / Fan Yishu/Xinhua
South China Sea: Beijing Unwilling to Go Down Without a Fight Amid US-Led FONOP
In Beijing, Chinese Foreign Ministry spokesman Geng Shuang said on Wednesday he was aware of the report, though did not say if China was planning on placing missiles on the reefs.

Meanwhile, Foreign ministers of the Association of Southeast Asian Nations (ASEAN) who were meeting on the Philippine Island of Boracay on Tuesday, noted the importance of sustaining the momentum of dialogue in easing the tensions in the disputed South China Sea.

They expressed concern over the possible militarization of some areas in the region.

Commenting on the developments in the region, Konstantin Sivkov, the president of the Moscow-based Academy of Geopolitical Problems noted that the coincidence in time of the US patrol in the South China Sea with the ministerial meeting of ASEAN and of the reports of China's buildings might mean a simultaneous US' pressure both on China and ASEAN.

"The US is mounting military tensions in the South China Sea," he told Sputnik.

© REUTERS / Reuters
Beijing Warns US Against Planned Maritime Patrols in South China Sea
"Trying to contain China, the US is demonstrating its military activity. Hence the concern of the South Asian countries is that there is a high risk of a local conflict with participation of China, US and Japan," he added.

The expert noted that even though the risk of a large-scale conflict remains highly unlikely, there could be a local military face-off between the fleets of the US and Japan on the one hand, and China on the other.

The expert further noted that there is a US geopolitical game going on in the region. The reports of China's constructions on the islands are the means of this game played against Beijing. However Washington knows only too well that China won't resort to any compromise in this issue regardless any US pressure.