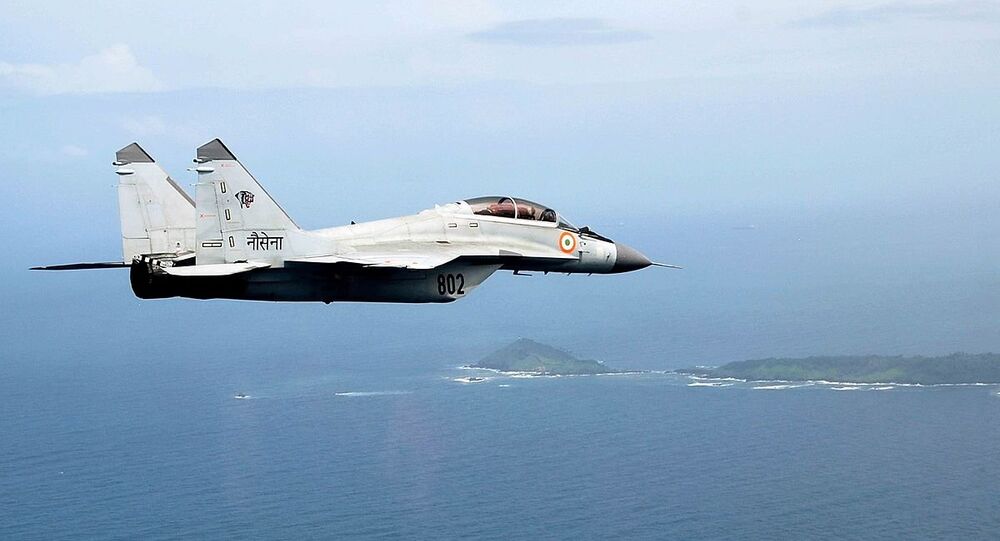 Indian Navy has announced a tender for 57 multi-role carrier borne fighters. Russian Aircraft has announced its willingness to participate in this bid.

New Delhi (Sputnik) – In a bid to improve serviceability of carrier aircraft MiG 29K, Indian government has decided to set up an ‘intermediate’ engine repair facility for MiG 29k fighter jets at the Indian Navy base at Goa. Indian Navy has 45 such jets that operate from sea-borne aircraft carrier Admiral Gorshkov i.e INS Vikramaditya. Russia has completed the delivery of all the contracted fourth generation multi role fighters in 2016.

“This was a long overdue measure. There was always an understanding between India and Russia that once these aircrafts come, a repair facility will be installed but somehow it got delayed. Indian Navy was pressurizing to government for more than 2-3 years for repair facility in Goa where squadron is based. As we know that serviceability of MiG 29K jets is very low and Indian Navy was struggling to find spare parts for the aircraft, sanctioning of this repair facility is definitely a welcome step,” says Indian Naval Commander Abhijit Singh (retired).

The service life of the aircraft is 6000 hrs or 25 calendar years whichever is earlier while service life of RD-33MK engine fitted on MiG29K/KUB is 10 years/4000 hours with an overhaul life of 1000 hours.

“Repair facility is basically only to create indigenous capability to make sure that aircraft are always in serviceable condition. For this Russia may provide equipment and training to Indian Navy. But, serviceability will all depend on how Russian manufacturers supply spare parts to India,” Abhijit Singh added.

Last month Russia had announced that it would set-up an after-sales service center in India for maintenance of MiG-29 fighter jets for its foreign clients. “We offer the contractual after-sales service to our foreign clients. Beside the delivery of the aircraft, we are ready to create the maintenance centers on the territory of the client … Such a center to service MiG-29 jets is expected to be opened in India in 2017,” Sergey Korotkov, the vice-president of the United Aircraft Corporation for innovations said.

Indian government had contracted with Russia for acquisition of 16 twin engine MiG 29K/KUB aircraft and associated equipment at a cost of $ 740.35 million initially out of which 13 aircraft was intended for Admiral Gorshkov i.e., INS Vikramaditya. Thereafter, the Ministry had concluded in March 2010 an Option Clause contract for acquisition of 29 MiG 29K/KUB aircraft at a cost of $ 1466.44 million.