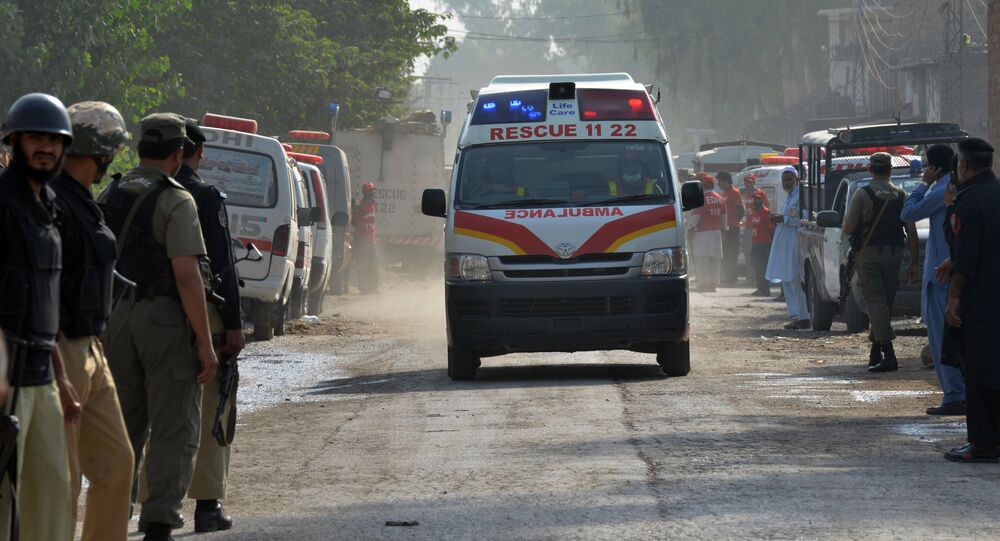 At least six people were killed and 20 others were injured as a result of a terrorist attack near a courthouse in northwestern Pakistan's Khyber Pakhtunkhwa province, Pakistan's The Express Tribune reported Tuesday citing local authorities.

NEW DELHI (Sputnik) — According to the Dawn newspaper, at least three attackers attempted to enter the courthouse, opening gunfire and throwing hand grenades. The police killed two terrorists, while another one killed himself. The total number of attackers remains unknown.

Jamaat-ul-Ahraar terrorist group has claimed responsibility for the attack.

© AFP 2021 / RIZWAN TABASSUM
At Least 10 Killed in Blast in Pakistan's Lahore
The incident took place in the Charsadda district town of Tangi. District Police Officer (DPO) Sohail Khalid said explosions took place at the entrance of the court, as cited by local media. One of the eyewitnesses described one of the assailants lobbing a hand grenade at the gate of the court and opening fire. Another eyewitness said one of the suicide bombers was shot dead by security officials in an attempt to enter the court.

Pakistan has been recently hit by a series of deadly terrorist attacks. On Thursday, a suicide attack took place in a shrine in the southern city of Sehwan. According to Pakistani media citing the country’s health officials, at least 88 people were killed and over 300 others were injured as a result of the attack.