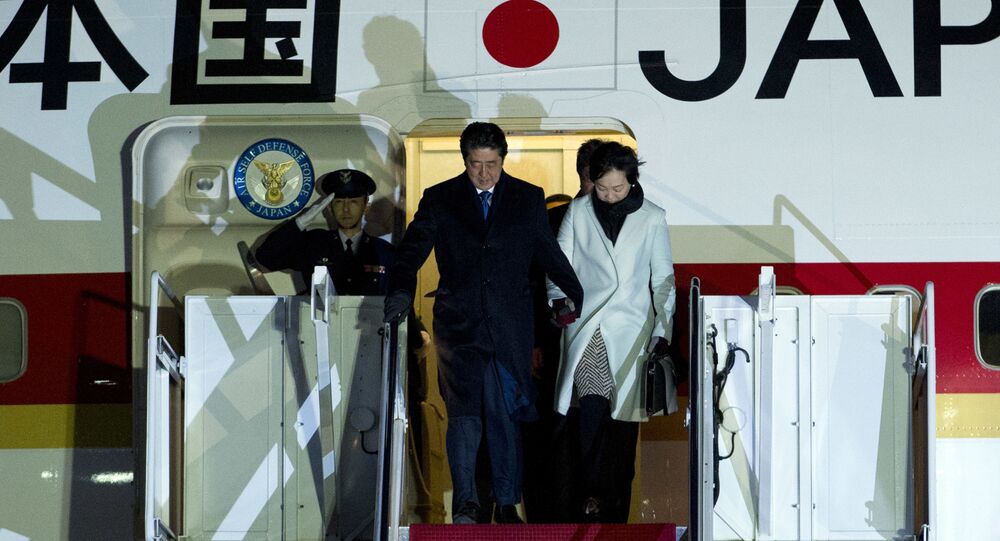 During his meeting with US President Donald Trump in Washington on Friday, Japanese Prime Minister Shinzo Abe will try to solidify an economic and security partnership between his country and the United States.

© AP Photo / Shizuo Kambayashi
Japan Has Chance to 'Resolve Differences' With US as PM Abe's Visit Approaches
Donald Trump’s decision to pull out from the Trans-Pacific Partnership agreement and focus on signing bilateral trade deals with regional powers, sent a very alarming signal to Japan.

During a Cabinet meeting on February 1, Shinzo Abe said that he was going to discuss with President Trump a raft of economic issues, including how Japan could “help create new jobs in the US, increase labor productivity and competitiveness of the American industrial sector.”

In an interview with Sputnik, Valery Kistanov, director of the Center of Japanese Studies in Moscow, said that Japan’s relations with Russia could also be discussed.

“I think Abe will try to clarify Trump’s position on Japan's territorial dispute with Russia, the peace treaty, Japan’s joint projects with Moscow in circumvention of the US-imposed sanctions, etc.”

“The Japanese fear that if Donald Trump makes good on his promise to mend fences with Russia, President Putin could toughen his position on the disputed islands. That’s why I believe that Abe will certainly try to gauge Trump’s position on the issue,” Valery Kistanov said.

Shinzo Abe came to Washington armed with proposals on how Japanese companies will create hundreds of thousands of jobs and invest hundreds of billions of dollars in the United States.

According to Kyodo news agency, the list of projects Abe is going to present in Washington includes the construction of high-speed railways in Texas and California and the production of 3,000 news railway and subway cars. Japan could also help develop shale oil deposits in the US.

Toyota earlier said within the next five years it was going to invest $10 billion in the United States and Japan’s SoftBank plans to sink an estimated $50 billion into the US economy.

According to expert estimates, Tokyo plans to invest around $150 billion in infrastructure projects in the US thus creating 700,000 new jobs. Tokyo hopes that all this will sit well with President Trump because it is exactly what he is going for.

In addition, Japan creates and sustains millions of US jobs, including 1.5 million in the auto industry.

Valery Kistanov said that during his recent visit to Tokyo, US Defense Secretary James Mattis reaffirmed Washington's commitment to its defense treaty with Japan amid concerns about President Trump's approach to the region and the alliance.

“This was a very sensitive issue for Japan, which already covers 80 percent of the cost of maintaining US military bases on its territory,” Kistanov said.

He added that the US exit from the Trans-Pacific Partnership accord was a blow to Shinzo Abe who hoped the deal would help breathe new life into Japan’s industrial sector.

“In Washington the two sides will probably discuss bilateral trade and other economic cooperation and will most certainly talk about Trump’s desire to review the provisions of the North American Free Trade Agreement (NAFTA), which has been so beneficial to Japan,” Kistanov noted.