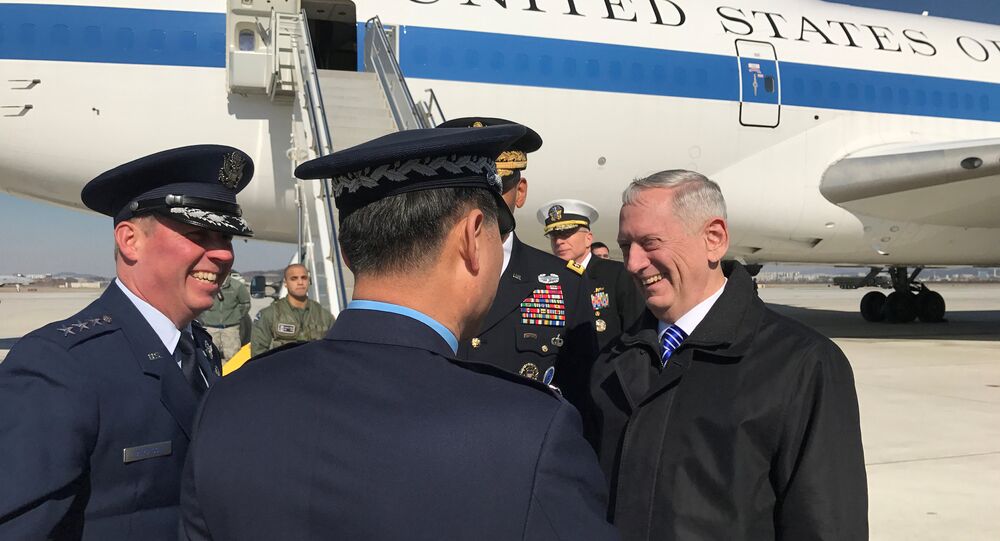 North Korea's provocative behavior is the only reason behind the US deployment of the Terminal High Altitude Area Defense (THAAD) system on the South Korean territory, US Defense Secretary James Mattis said Thursday on his first official overseas trip, reiterating that the defense of Seoul is the purpose of deployment.

MOSCOW (Sputnik) — In July 2016, Seoul and Washington agreed to deploy the THAAD system in South Korea's Seongju County amid growing tensions in the region spurred by North Korea's ballistic and nuclear tests. The proposed deployment has been met with objection and criticism from Beijing.

"THAAD is for defense of our allies' people, of our troops who are committed to their defense and were it not for the provocative behavior of North Korea we would have no need for THAAD out here … there is no other nation that needs to be concerned about THAAD other than North Korea," Mattis said after arriving at the Osan Air Base outside Seoul as quoted by the CNN broadcaster.

Mattis clarified that the deployment is in no way an affront on China, saying that the "only reason" this matter under discussion is "North Korea's activities."

© Flickr / Mark Holloway
China to Take Steps to Protect Security Amid THAAD Deployment in Korea - Foreign Ministry
When asked what strategy the Trump administration will take on the North Korea issue, Mattis made clear that his first visit will focus on speaking with South Korean leaders, so that he may gather their "appreciation of the situation" before any formal statement scan be made on the subject.

Mattis’ visit to South Korea marks his first overseas as Secretary of Defense, and comes amid brewing tensions in the Korean Peninsula over the recent months.

Pyongyang has successfully conducted five nuclear tests, including two last year, and has frequently made statements about the advancement of its nuclear program. In January, the North Korean Foreign Ministry announced that the country was ready to launch an intercontinental ballistic missile (ICBM) "anytime and anywhere."