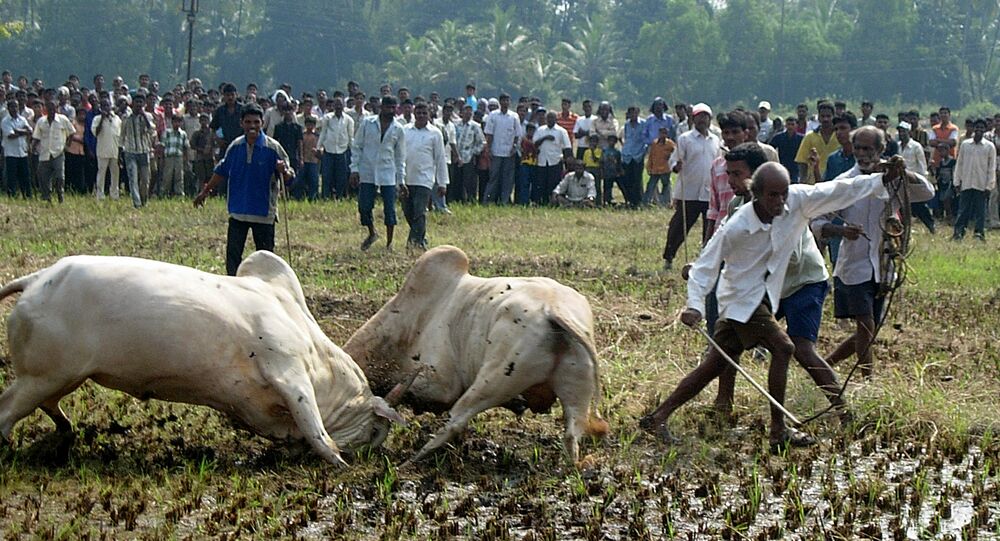 Supporters of a traditional sport in India have fought pitched battles with the police. They have now turned their ire on Coca-Cola and Pepsi because they feel it is associated with a US-based animal rights body that led the move to ban the traditional sport of bullfighting.

© AP Photo
Bullfighting Ban in India Lifted After Widespread Protests, Clashes With Police (PHOTOS)
New Delhi (Sputnik) — The protest against the ban on bull fighting, a traditional sport in parts of India, has taken an unusual turn. The activists in state of Tamil Nadu have sought a ban on US products like Pepsi and Coca-Cola. The convoluted argument by a trade union is that an American organization (PETA) had filed a case that led to a ban against their traditional sport called Jallikattu.

The Tamil Nadu Vanigar Sangam (Tamil Nadu Trade Union) has officially announced that the sale of Pepsi, Coca Cola and its other products would be banned across the state from March 1. "Pepsi and Coca-Cola are taking water from a river because of which farmers have no water for irrigation," said the union chief Vikramaraja.

PETA go ban bull riding rodeos in Mr.Trump's U.S. You're not qualified to tackle our bulls. Empires have been made to quit India.

"Protesters have said that they will not consume any soft drinks manufactured in the US. Therefore, as a sign of respect to Jallikattu protesters, we have decided to ban the sale of Pepsi and Coca-Cola in Tamil Nadu."

Coca Cola and Pepsi have large water purification plants in Tamil Nadu which absorbs million of litres water from state dams. From those plants, both the cola companies supply carbonated drinks and water in tune of approximately $1 billion.