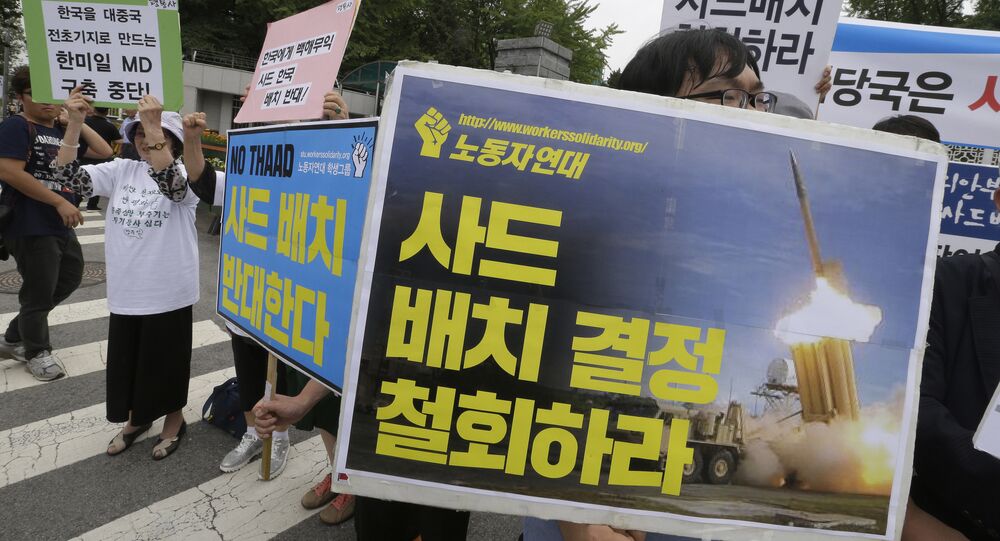 Despite almost half a century of diplomatic experience former UN Secretary-General Ban Ki-moon does not understand the THAAD anti-missile system-related problem which is why he has no right to be the South Korean President, according to peace activist Cheong Wook-sik.

© Flickr / Mark Holloway
THAAD vs Cosmetics: China's Retaliation Concerns Over MD Dispute With Seoul
In an interview with Sputnik Korea, South Korean peace activist Cheong Wook-sik said that former UN Secretary-General Ban Ki-moon  has no right to become the country's next president  because he does not comprehend the problem pertaining to Terminal High Altitude Area Defense (THAAD), despite almost half a century of diplomatic experience.

Late last week, Ban said that "given the reality, where the Korean Peninsula is in a state resembling war, [South Korean] authorities' actions [on deploying THAAD] are reasonable."

Ban, whose second 5-year-term as the UN Secretary-General expired at the end of 2016, is considered a possible presidential candidate in the wake of the political scandal which took down South Korean President Park Geun-hye.

Speaking to Sputnik Korea, Cheong Wook-sik recalled that Ban was South Korea's Foreign Minister at the time of transfer of power in the United States from Bill Clinton to George W. Bush, who announced his country's withdrawal from the 1972 Anti-Ballistic Missile (ABM) Treaty between Moscow and Washington.

"The 43rd US President George W. Bush, who entered office in 2001, changed the policy established by his predecessor Bill Clinton by announcing the US' unilateral withdrawal from the ABM treaty. Then-South Korean Foreign Minister Ban Ki-moon failed to duly respond to this change," Cheong said.

According to him, "it is surprising that Ban turned a blind eye to Bush's intention to pull out of the ABM Treaty, which he mentioned while still a presidential candidate, and which had repeatedly been reported by the US media."

Cheong added that the South Korean government, which expressed support for the ABM treaty, was definitely stunned by Bush's move at the time.

"The Korean government looked as if they rebelled against the Bush administration. Washington-Seoul relations were overwhelmed [as if] by a huge wave, resulting in the South Korean Foreign Minister and his deputy being dismissed," he said.

Currently, the former UN chief expresses support for the THAAD deployment in South Korea, prompting critics to say that THAAD is one of the links of the ABM Treaty, and that it is impossible to approve THAAD without understanding the ABM agreement first.

"The current problem related to THAAD is much more complex than the story that took place 16 years ago. If the problem pertaining to the ABM Treaty was somehow resolved, the THAAD crisis is just beginning, and it is unclear what the consequences will be," Cheong pointed out.

China and Russia have repeatedly showed their objection to the deployment of THAAD, arguing that their real aim was to deter the strategic weapon systems not only in the Korean peninsula’s North, but primarily in China's hinterlands and Russia's Far East.

Japanese Defense Minister to Visit US THAAD Battery in Guam