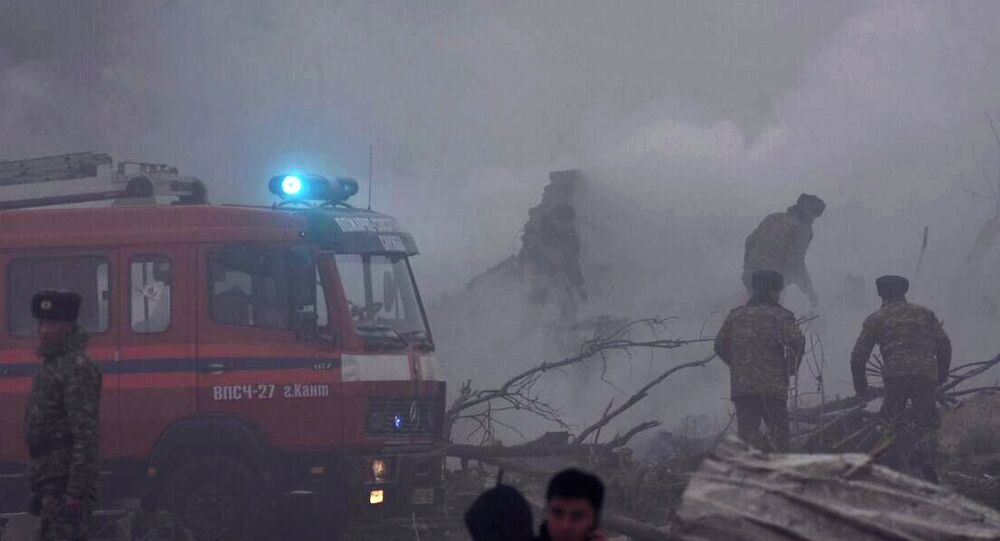 A Turkish cargo plane crashed damaging homes near Manas airport close to the Kyrgyz capital Bishkek, where it was supposed to make a stopover. One family was inside their home when the plane crashed right outside their window, destroying their roof. Sputnik Kyrgyzstan spoke to the victim in an interview.

A resident of Dacha-Suu village, Baktygul Kubatova, was asleep inside her home with her two young children when she was awakened by a loud crash just outside her window.

As soon as she woke up she realized that the roof had begun to crumble and they were trapped inside their house with no time to run out.

“I opened my eyes and saw red flames in the window. I did not have the time to figure out anything, as the ceiling began to crumble on us. I put a blanket over my son, he was crying and I lay motionless next to him. My daughter slept on the couch beside us,” Kubatova told Sputnik Kyrgyzstan.

She further said that “it was a miracle that we survived.” When the ceiling stopped collapsing, she began to call out to her husband and with the help of a neighbor pulled Baktygul and the children out from under the rubble.

“When we went outside there was fire everywhere. I'm still in shock and do not know how we managed to survive. I do not know whether to laugh or cry,” she said.

© Sputnik / Tabyldy Kadyrbekov
Up to 31 Bodies, 9 Body Parts Found at Turkish Plane Crash Site in Bishkek (PHOTO, VIDEO)
The tragic catastrophe has left Kubatova’s family alive but without a roof over their heads. Their house has been destroyed and she doesn’t know if any of her neighbors had survived.

The cargo plane was a Boeing 747 operated by Turkey's ACT Airlines. It crashed into homes near Manas airport while en route from Hong Kong to Istanbul via Bishkek.

"Preliminary data indicates that the deaths of at least 31 people have been established and nine human body parts have been found near Manas airport as a result of the Boeing 747 crash," the press service said, citing information obtained from the emergencies minister.