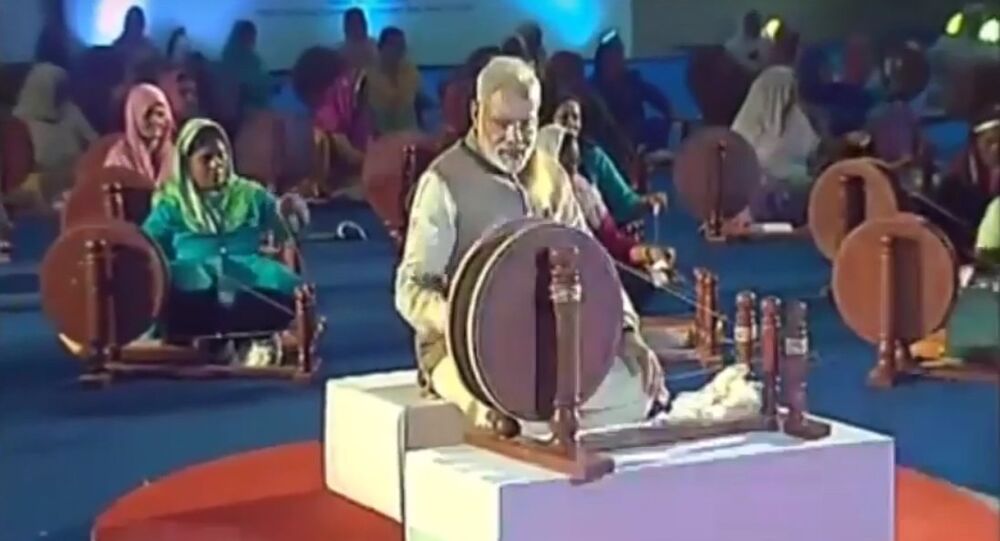 Khadi – a campaign to promote hand-spun textile was launched in 1920 as a political weapon in the Swadesi Movement of Mahatma Gandhi. Critics are accusing PM Modi of trying to hijack the legacy of Gandhi- considered the father of the nation by Indians.

© REUTERS / Anindito Mukherjee
Twitter Mercilessly Trolls Gandhi Scion Over Comments on Punjab Drug Menace
New Delhi (Sputnik) – In a move that has amused some and irked many, the Khadi and Village Industries Commission (KVIC) of India has replaced the picture of Mahatma Gandhi, which served as the emblem of the organization, with that of Prime Minister Narendra Modi in its recently printed calendar for 2017.  KVIC is the apex body of small and medium scale village industries and is a fairly popular consumer brand in textiles and village-sourced FMCG products.

The cover photo of the calendar shows Modi weaving khadi on a large ‘charkha’ (spinning wheel) in the same classic pose as Gandhiji. Opposition leaders reacted sharply to the move. For the record, Gandhi was always on the spinning wheel during his spare time while PM Modi is given to other pursuits such as Yoga.

In the calendar and diary of Khadi (KVIC) 2017 Modi replaced Mahatma Gandhi ji. Gandhiji is the Father of the Nation. Modi ji what??? 2/2

​An employee of KVIC retail outlet in New Delhi told Sputnik that they were not aware of the changes till they received the calendars. He said the sentimental connotation attached to the image of Mahatma Gandhi weaving on the spinning wheel was the driving force behind the industry’s success. Employees of KVIC at its headquarters in Mumbai said they staged a silent protest wearing black bands on their mouths.

Meanwhile, the government said the controversy over the KVIC calendar was uncalled for. "Gandhiji has his own place, nobody can take it," said Union Minister Kalraj Mishra. He further claimed that Khadi sales have seen a 34 per cent growth ever since the Narendra Modi led government stepped up efforts to popularize the brand.

Those supporting Modi argue that since he has popularized the Khadi textile by making them part of his official ensemble, it was fine to project Modi as the bran ambassador of KVIC.

@TimesNow why should he not replace? If he wants to promote Khadi in a big way #KhadiModiFied

​The social media was abuzz with witty comments on the row.

If Modi's is a brand ambassador for Khadi today, why not use his picture. Modi is promoting https://t.co/RMzlGvvky9 via @economictimes