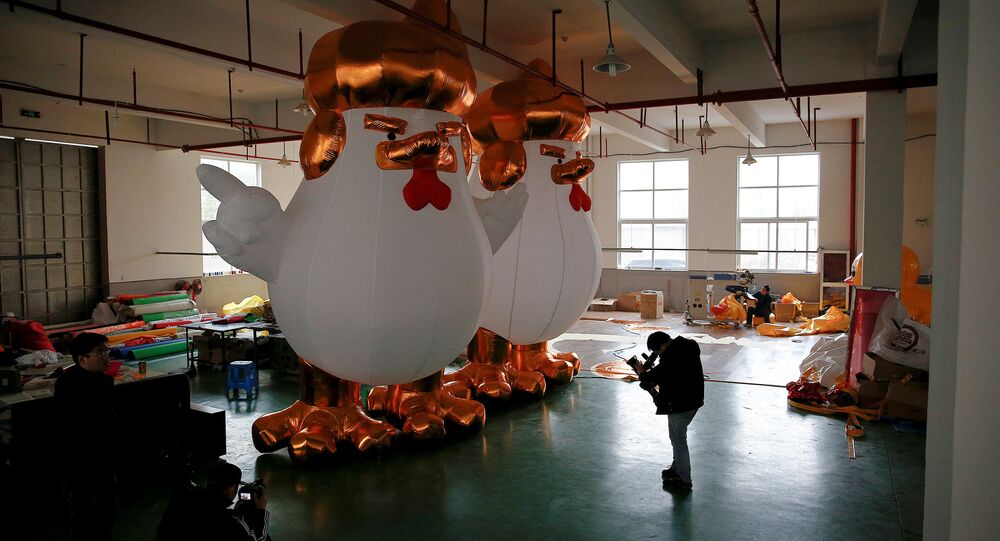 A Chinese company has a big hit on their hands with 20-meter-tall inflatable roosters that resemble US President-elect Donald Trump.

The company, Caile Inflatable Products, has produced 30 of the giant inflatables ahead of the Lunar New Year on January 28, meant to represent this year’s Chinese zodiac animal, the rooster.

The inflatables range in size, and cost, with a six-foot ‘Trump’ rooster selling for $50, up to a 52-foot model for $5,300. They are currently only available in China, but as demand increases, they may expand sales to other regions.

© REUTERS / Hyungwon Kang
China to Base Relations With Trump Administration on Mutual Respect
The company claims that any likeness to the incoming US president is a coincidence, and not intentional. However, their product holds a striking resemblance to a statue that appeared in northern Shanxi province last month. The artist who constructed the statue, US-based designer Casey Latiolais, recently noted some similarities between Trump and the breed of inflatable bird.

"I can definitely say Mr. Trump has a lot of similarities in that he likes to tweet," Latiolais told Reuters. "And he also likes to tweet at or around sunrise, and if you take away the fact that roosters are kind of loud and self-absorbed, then I think you can start drawing similarities that way."

"Maybe the meaning (behind the statue) is in that 2017, the year of [the rooster], there will be a bigger and better breakthrough in diplomacy (between the U.S. and China)," said Taiyuan resident and teacher Wang Hainan.

During Trump’s campaign, he took a firm stance with China, blaming Beijing for job losses in the US, and vowing to label the nation a “currency manipulator” on his first day in office.