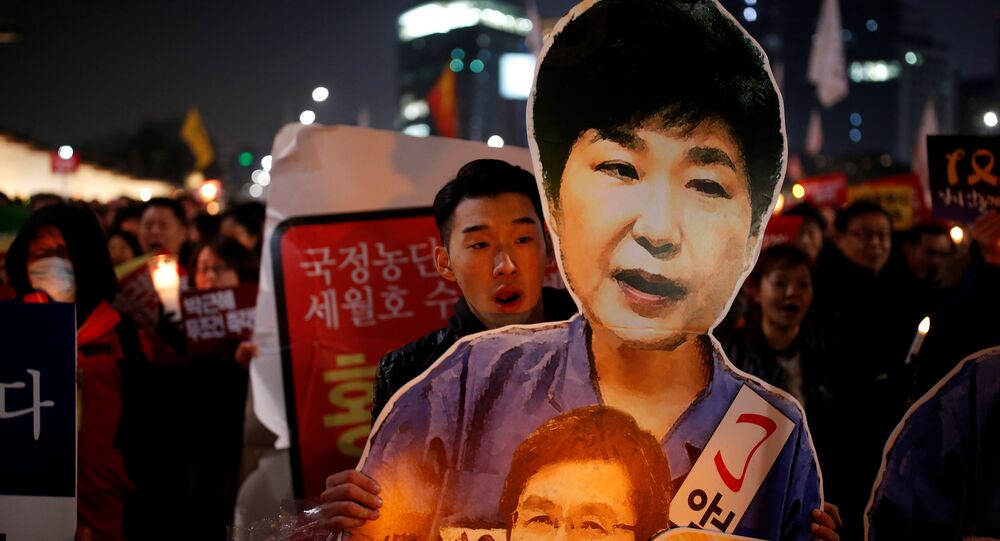 Why South Korea's Political Vacuum Could Cause a Regional Meltdown

The scandal surrounding South Korean President Park Geun-hye, who was suspended last month over allegations of influence-peddling, continues to grow. The Council on Foreign Relations, a highly influential US-based think tank, is concerned that the scandal threatens Washington's interests in Northeast Asia. But is it a threat to regional security?

South Korea became embroiled in political scandal in late October, when national media revealed that President Park Geun-hye was involved in an influence-peddling operation involving Choi Soon-sil, a close personal friend, shadow 'adviser', and daughter of influential deceased cult leader Choi Tae-min. Choi is accused of having used her connections to the president to pressure and extort major South Korean corporations. The scandal, which resulted in Park's impeachment in December, has since expanded, and is now thought to involve many major Korean political and business leaders. On Wednesday, Samsung Electronics heir Lee Jae-yong was summoned by an investigative committee over allegations of bribery involving Choi's company.

© AP Photo / Rene Schutze/Polfoto
South Korea Nullifies Passport of Daughter of Impeached President's Friend
Following Park's suspension, Prime Minister Hwang Kyo-ahn stepped in to serve as acting president. The Constitutional Court has been given six months to decide whether to make Park's impeachment permanent. If they recognize the parliament's decision, presidential elections will be scheduled between March and August. If not, Park will be allowed to serve out the remainder of her term until elections in December, and the appointment of a new president in February 2018.

In any event, a political scandal of this magnitude threatens to have major geopolitical implications as well. Specifically, Council on Foreign Relations Korea analyst Scott A. Snyder believes that the crisis could mean grave problems for US interests in the region. The US's geopolitical competitors, particularly China, could take advantage of the situation, as could North Korea, Snyder warns.

Specifically, the analyst explained, South Korea now faces a political vacuum – one that could last for up to a year. During this time, "there will be no one with the authority to make and implement sensitive decisions." That's because the country's Acting President Hwang Kyo-ahn is faced with major limitations from the country's parliament when it comes to making decisions on controversial issues, including in the area of foreign policy.

That includes delays in any efforts by Seoul to establish a close relationship with the incoming US president. "South Korea's incapacity to have a national leader meet with [Donald Trump] will limit the ability of both countries to send early political signals of affirmation regarding the importance of the relationship," Snyder noted. That's troubling, the analyst suggested, given Trump's comments on the campaign trail last year that Washington's allies, including South Korea, would have to do more to pay their fair share for US commitments on joint defense.

© AFP 2020 / CHOO YOUN-KONG
South Korea Rejects Joint Drills With US, Japan Aimed at Countering North Korea
Last March, Trump cast doubt on the US commitment to continue to station US troops in South Korea. He also indicated that the US may well be "better off" if South Korea built its own nuclear deterrent to defend against North Korea.

The political vacuum in Seoul may also threaten the country's relations with other US allies, including Japan, Snyder suggested. This includes questions about whether Seoul will stick to an agreement reached with Tokyo in 2015 over the so-called Comfort Women issue, which involved the use of South Korean women in Japanese army brothels during the Second World War. South Korea's opposition Democratic Party has already voiced opposition to the agreement, prompting fears in Tokyo that continued South Korean-Japanese security cooperation may be ruptured.

Furthermore, concerned about the future of expanded US military presence in South Korea, Snyder warned that South Korea's security could be threatened by "external manipulation" in the form of a "more aggressive stance" by Beijing in its opposition to the US deployment of its Terminal High-Altitude Air Defense (THAAD) system in the country. South Korea's leading presidential candidate for the opposition, Moon Jae-in, has already "publically stated that such a decision could be reversed without incurring much damage to the US-ROK alliance," Snyder recalled.

© AFP 2020 / JUNG YEON-JE
South Korean activists hold placards during a rally against a plan on deployment of the US-built Terminal High Altitude Area Defense (THAAD), outside the Defence Ministry in Seoul on July 13, 2016. Activists have staged a series of rallies voicing their opposition to the missile defense system's deployment in their region.

China, and to a lesser extent Russia, have repeatedly marked their concern over the South Korean deployment of US missile defense systems, warning that it could lead to a new arms race. Observers have also pointed out that contrary to Washington's claims that the system is intended to protect against the North Korean nuclear threat, it may actually be the first step in a missile defense system aimed at neutralizing China's nuclear deterrent.

Finally, Snyder noted that the continued political vacuum in Seoul could prompt a "direct challenge or provocation" from North Korea. This "nightmare scenario" as he called it, particularly if it involved "casualties or other tangible losses," would be difficult for South Korea's institutional bureaucracy to deal with, the analyst stressed. It would also mean risks for the US, he added, particularly if Washington leads the response to any such provocation, without due consideration for South Korean sensitivities.

© AP Photo / Ahn Young-joon
China Seriously Concerned Over Escalation Between North Korea, US - Foreign Ministry
Washington, Seoul and Tokyo have accused North Korea of ratcheting up tensions in the region in recent months and years as the country continues its efforts to build up its nuclear capabilities. Pyongyang has countered with the argument that South Korea and the US are to blame for the tensions, citing constant military exercises on North Korea's borders and threats to carry out targeted strikes to eliminate the North Korean leadership.

Ultimately, Snyder suggested that "the best the South Korean public can hope for under current circumstances is that the government muddle through and avoid big mistakes that might further exacerbate the situation." And while the analyst doesn't mention it, the same can be said for the US foreign policy establishment. According to Snyder, the incoming Trump administration's priorities and agenda will have "far-reaching consequences for the Korean Peninsula." Accordingly, he suggests that "staying on the sidelines" in the coming weeks could lead to geopolitical consequences for Washington.

On the other hand, while the interventionist Council on Foreign Relations would never admit it, the political uncertainty in Seoul could have one positive effect, in that it may force South Korea to use its own diplomatic resources to attempt to resolve regional security issues, whether it's THAAD or North Korea. This in turn could help avoid entangling Washington in yet another regional conflict thousands of miles from US shores. It could also ensure a degree of political independence for South Korea from the US unheard of since the country's creation in 1948.

China Seriously Concerned Over Escalation Between North Korea, US