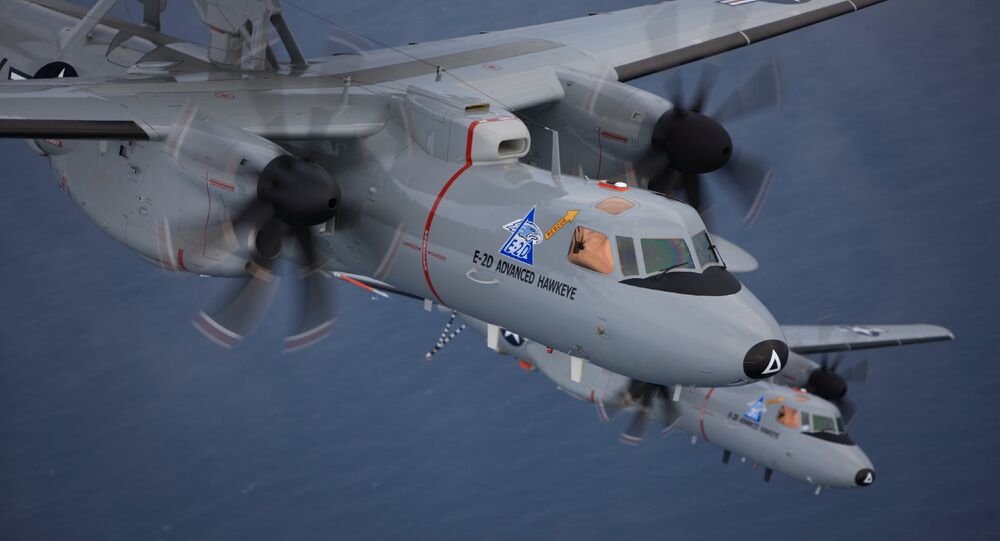 The US Navy announced Thursday that it will deploy its leading-edge early-warning surveillance aircraft to Japan in February. The aircraft, developed by defense contractor Northrop Grumman and the latest in air defense technology, can detect missile attacks and stealth aircraft as well as coordinate other ships and aircraft during combat.

The E-2D Advanced Hawkeye, the latest version of Northrop Grumman's Airborne Early Warning (AEW) aircraft, began development in 2007. Equipped with a state-of-the-art AN/APY-9 UHF-band radar, it can reportedly detect even small, targeting-resistant aircraft like the Chinese Chengdu J-20 and the Russian Sukhoi T-50.

The Hawkeye can detect cruise-missile and ballistic-missile launches from long range, potentially allowing for the missile to be redirected or shot down. Reuters reported that, in a combat scenario, a Hawkeye can "act as a networked battle management platform, guiding other aircraft and ships to fire on incoming threats."

The Pentagon has awarded over $4 billion in contracts since 2013 for Northrop Grumman to produce fifty of the advanced Hawkeye aircraft. The US Navy hopes that Hawkeyes will give them a tactical edge in the Asian theater against a rapidly-modernizing Chinese military.

"The Advanced Hawkeye's suite of systems allow it to act as the 'digital quarterback' of the fleet, collecting and distributing the tactical picture to command centers and other assets," said a US Navy press release. The Hawkeye will deploy from the USS Ronald Reagan, the aircraft carrier assigned to the Asia-based Seventh Fleet. The Navy did not give exact numbers for how many E-2D's will be deployed to Japan.

These new aircraft will replace E-2C's that have been in service since the early 1970s. Northrop Grumman's website described the Hawkeye as a "two-generation leap in radar sensor capability" as well as a "game changer in how the Navy will conduct battle management command and control."

The E-2D deployment in Japan is part of an American military pivot to Asia, in no small part due to renewed tensions, as President-elect Donald Trump has been politically and economically agitating China. After a November 2016 meeting, Japanese Prime Minister Shinzo Abe described Trump as a "trustworthy leader," leading to accusations from Chinese state-run media that Abe was working from a "zero-sum mentality [that] ensures Japan will have to take on the role of the US' 'little brother.'"

In recent years, US Navy assets stationed in Japan have been the first to receive cutting-edge aircraft. Six Boeing P-8A Poseidons, submarine hunting naval fighters, were sent to the Seventh Fleet in late 2013. Sixteen Lockheed-Martin F-35B stealth fighters will be deployed there in mid-2017.

New 'Pivot to Asia'? Will Pentagon's Next Chief Be Particularly Tough on China