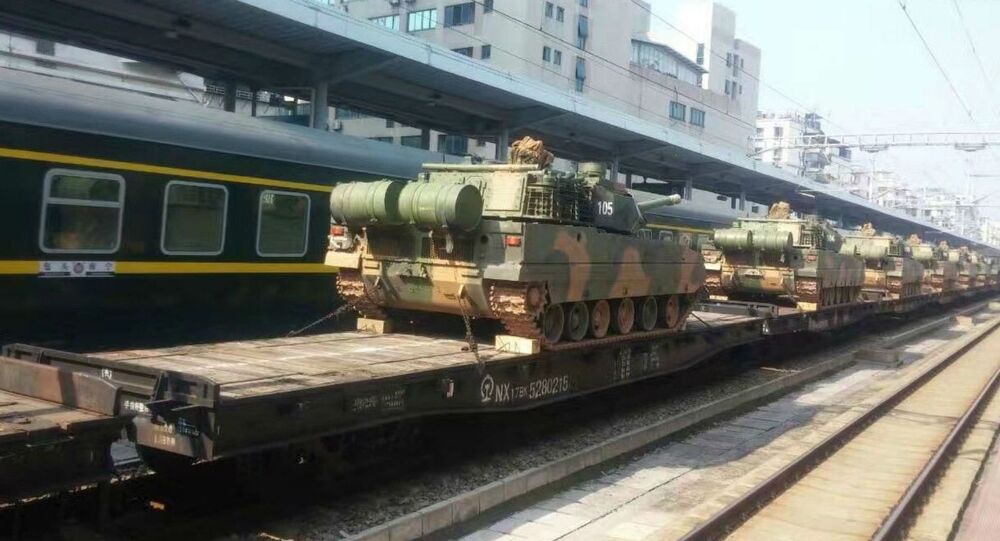 In late December 2016 images started cropping up on Chinese internet forums indicating that ground units in Beijing’s military may be armed with a new light tank. The combat vehicle supposedly being used by the People’s Liberation Army (PLA) was first seen in 2011.

Photographs show ten of the new vehicles on a flatbed railcar, seemingly making their way through southern China’s Guangxi Province Guilin railway station. Within Guangxi’s jurisdiction is Guangdong, home to the PLA’s new Southern Theatre Command, and the photos indicate that the tanks may be on their way to the new unit.

Popular Chinese website Sina.com reported on the tank in January 2016, detailing its features, weaponry and combat history. The tank reportedly weighs at about 35 tons and can accommodate a crew of four, though some have suggested that an autoloader for the vehicle’s 105 mm main gun lowers its crew capacity to three.

According to Jane’s, the PLA became interested in light tanks in the 1950s out of a need to navigate southern China’s rice paddies, low-capacity ridges and inadequate roads. Light tank development was put on hold in the 1990s as focus shifted to amphibious combat vehicles, reemerging in the early 2000s.

Sina.com reported that the weapon can fire gun-launched missiles and tungsten-alloy anti-tank rounds with the ability to pierce up to 500 mm of armor, while the commander’s optics and the gun’s main sight seem to be adapted from the T-99A2 battle tank. There also appears to be a shell-tracking radar mounted on the gun, along with an ‘arrowhead’ turret complete with laser detectors and detachable reactive armor blocks.

Smoke grenade launchers can also be carried on the turret bustle.

Liquid gas suspension may also be featured in the tank, which will help make air and rail transport easier and give it the ability to be better hidden on terrain. The vehicle’s wide tracks reportedly equip it with a ground pressure rating that rivals the 2-ton E Type 62/WZ-131 light tank that Beijing used in the early 1960s. If the reports are accurate, this would mean the tank could successfully traverse rice paddies.