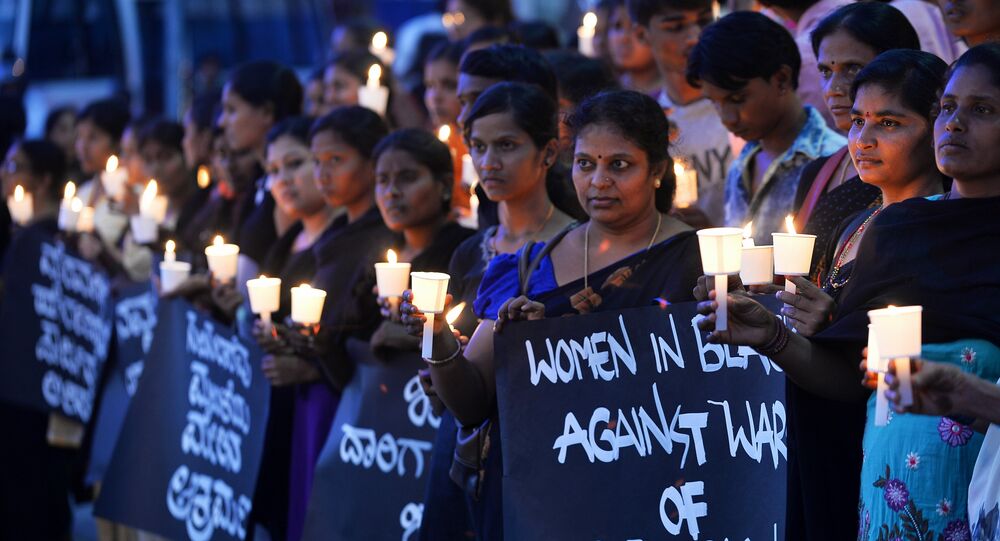 An Indian state official has brushed off what is being called a "mass molestation" in Bangalore New Year's Eve by saying said the young women assaulted in the streets were dressed like Westerners.

In the crowd that gathered to mark the turn of the year in one of India's largest cities were men who took the opportunity to ogle and in some cases grope and attack women, several local media outlets have reported.

"Whenever a woman passed the molesters groped and pawed them, taking advantage of the intense crowd… You can fight back one or two people but how do you fight a crowd," a woman who was at the event told India's NDTV.

She said she saw girls crying and shouting for help, even taking off their shoes to fight back attackers.

Another witness said attackers "grabbed women's hair and pulled at their clothes." She also said there weren't enough police on hand to control the crowd. "Everyone was drunk and pushing each other, people behaved indecently. They did not leave a single girl," she said.

The Bangalore Mirror called it "a night of shame," and said the police deployed were not enough for the crowd of thousands. It published a photo essay depicting the violence of the night.

Bangalore's police are disputing the characterization of the event as out of control. "We had deployed 1,600 police personnel in the area for new year's celebrations and around 60,000 people had come there that night. But we had the situation under control," Nagaraj, an inspector at Bangalore's Cubbon Park Police station who goes by only one name, told the Hindustan Times. He and other police representatives say that no assault or harassment charges have been filed and that the received no special flow of calls for help during the event.

The home minister of Karnataka state, of which Bangalore is the capital, simply said January 2 that "such things happen," and appeared to blame women in the crowd for their dress.

"And youngsters were almost like Westerners. They tried to copy the Westerners, not only in their mindset but even in their dressing. So some disturbance, some girls are harassed… these kind of things do happen."

He did say security camera footage from the event would be reviewed and any offenders brought to justice.

National Commission for Women chief Lalitha Kumaramangalam has called for Parameswara's resignation and an apology, the Hindustan Times reports.

"Such remarks from the home minister are unacceptable and regrettable. I want to ask this minister are Indian men so pathetic and weak that when they see a woman in Western clothes on a day of revelry, they get out of control?"

Sexual violence is epidemic in India, and rights groups complain that laws enacted after the particularly brutal rape and murder of a medical student in 2012 are not being enforced.