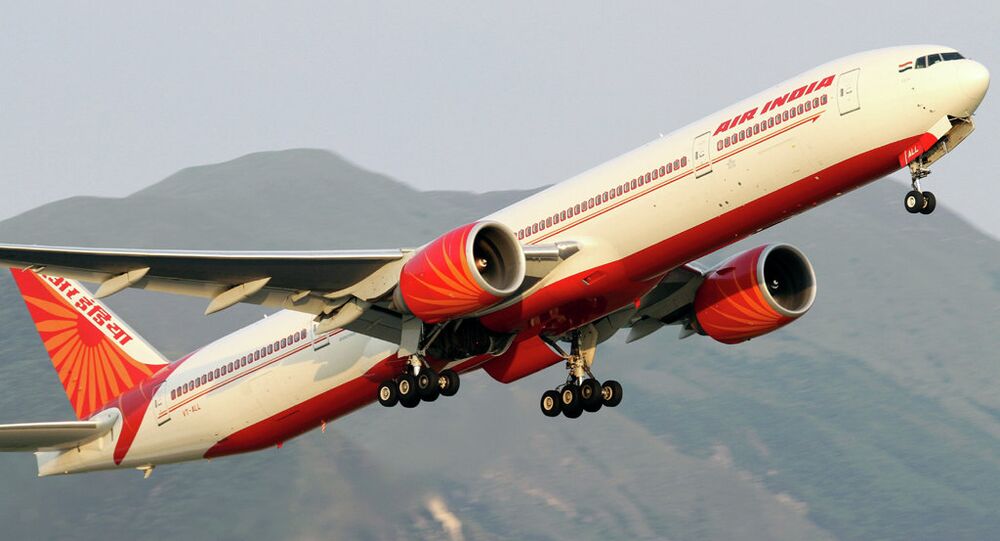 Alarmed by disgorging of human excreta by airlines while landing, the India’s `Green Tribunal’ has ordered surprise checks of waste tanks of aircraft. The airlines will be levied a fine of $ 750 if the waste tank is found empty on landing. It has fined the Environment Ministry for not addressing citizen complaints in this respect.

© AP Photo / Mahesh Kumar A
India’s Locally Made Aircraft May Erode Market for Boeing & Airbus
New Delhi (Sputnik) – India’s environmental court, the National Green Tribunal (NGT) has taken note of mid-air emptying of waste tanks by airlines. It has given a number of directions while disposing of a petition alleging dumping of human excreta by aircraft over residential areas near the international airport in New Delhi.

The Tribunal has asked the Directorate General of Civil Aviation (DGCA) to issue a circular to all airlines to ensure that they do not release waste from human waste tanks before landing.

"DGCA shall also issue directions that aircraft on landing shall be subjected to surprise inspection to see that human waste tanks are not empty. If any aircraft is found to be violating such circular or [their] tanks are found empty on landing, they shall be subjected to environment compensation of Rs. 50,000 per default," ordered a Tribunal bench. The NGT has also asked the civil aviation body to set up a helpline to address similar complaints.

A retired general of the Indian Army had sought action against airlines responsible for intermittent splatter of fecal matter over residential areas neighboring the airport. The NGT had earlier ordered the Central Pollution Control Board to collect the samples for inspection. The board had submitted in its report that the samples were indeed of human feces but could not ascertain their source. The tribunal had also imposed a fine of $75 on the Environment Ministry and Civil Aviation Ministry for failing to inspect the plea. Some airline officials had acknowledged that lavatory leaks can occur in the air at times but the Civil Aviation Ministry had opposed the argument.

However, experts say a system in modern aircraft prevents aircraft crew from emptying waste tanks mid air. The waste disposal system is controlled and operated by ground-staff upon landing of the aircraft.

A staff of IndiGo airlines on condition of anonymity said, “Under normal circumstances, the ground crew disposes the waste after the plane lands. The aircrew cannot empty a tank midflight because the valve is located on the fuselage of the plane and can only be opened by the ground crew. Waste can seep out of the tanks only there is a malfunction, usually resulting in the leakage of a blue liquid that is used for treating waste. But modern airlines have an advanced system of waste collection and disposal that does not require using this liquid.”

Nevertheless, complaints related to dropping of excreta and other waste products from aircrafts are not uncommon around the world. In 2011, the Civil Aviation Authority (CAA) of New Zealand released a report after probing complaints of countryside homes being splattered with frozen waste. The samples were taken to check if there were traces of any chemical used to clean airline toilets. The report found that the splattered waste was not related to aircraft.