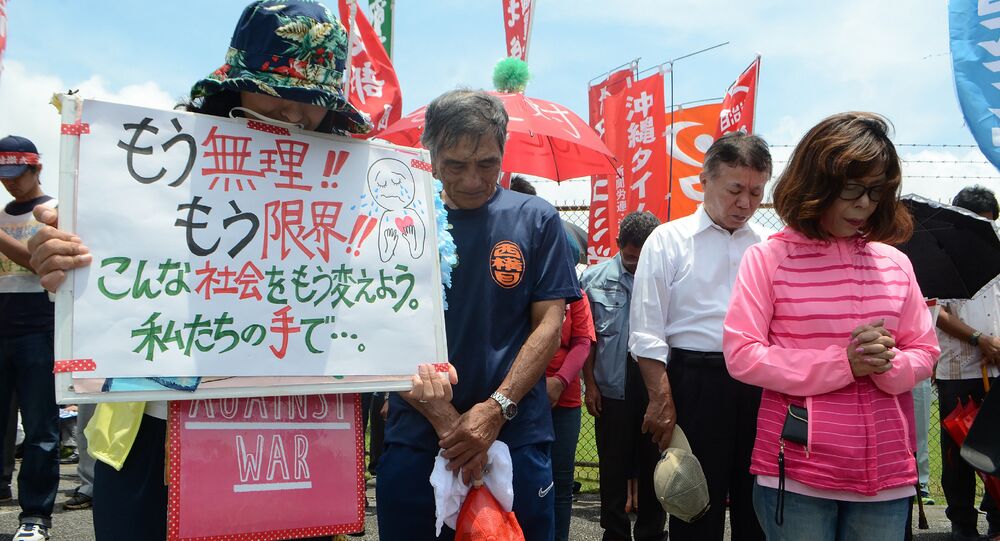 The US forces deployed in Japan announced on Wednesday readiness to return to Tokyo the territory in the Japanese Okinawa prefecture that has been controlled by the United States since World War II.

TOKYO (Sputnik) — Okinawa has been a home to a US military presence for decades, but the return of the land was considered closely last year amid tensions over the expansion of an US base there, as the Japanese government stood by its decision to move the military to another location, while Okinawa Governor Takeshi Onaga refused to fulfill Tokyo's recommendations to accept the relocation the base. Earlier this month, US Defense Secretary Ashton Carter announced that the US military would return some 9,800 acres to Tokyo by the end of the year.

© AP Photo / Eugene Hoshiko
Japan’s First Lady Attends Protest Against US Military Base in Okinawa
According to Kyodo news agency, the ceremony of return of almost 10,000 acres of land is set to be held on Thursday.

According to US commander Lt. Gen. Lawrence Nicholson, cited by Kyodo, the reduction of the US exercise area in Okinawa does not undermine the US commitment and ability to interact with the Japanese government and its forces.

Okinawa constitutes less than 1 percent of Japan's overall territory but hosts some 74 percent of the country's total US military presence, many of which are remnants of WWII, as Okinawa had remained under US control until 1972.