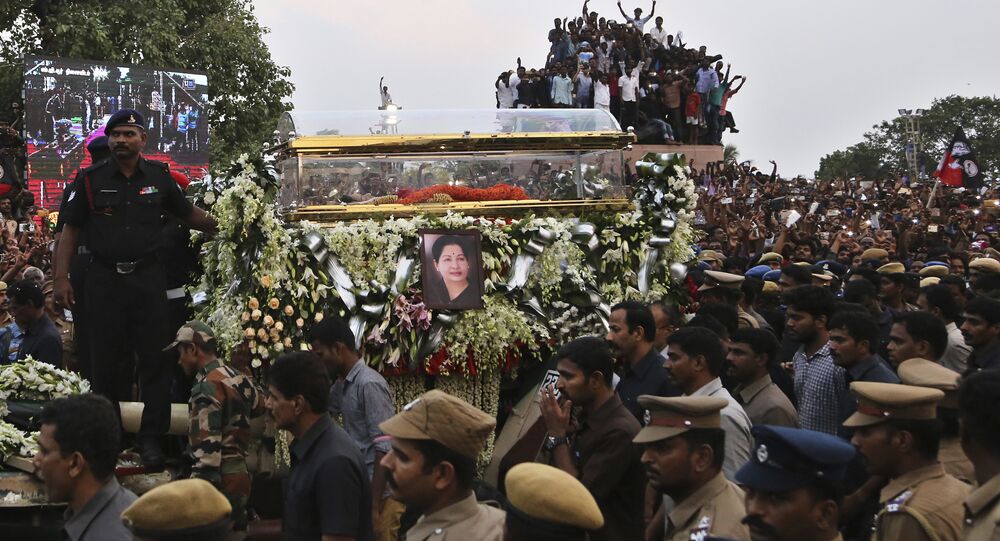 Jayalalitha was buried on Tuesday evening at the Marina Beach in Chennai, the capital of Tamil Nadu, in the presence of President Pranab Mukherjee and Prime Minister Narendra Modi besides a sea of political bigwigs. The four-time Chief Minister of Tamil Nadu had been receiving treatment for months at Apollo Hospital in Chennai.

In a condolence message the President of India said, "I am extremely sad to learn about the sad demise of Ms. Jayaram Jayalalithaa, Chief Minister of Tamil Nadu. PM Narendra Modi tweeted that he was extremely saddened at her demise that had left a huge void in Indian politics.

Deeply saddened at the passing away of Selvi Jayalalithaa. Her demise has left a huge void in Indian politics.

​PM Modi hailed her as a mass mass leader in another tweet.

Jayalalithaa ji’s connect with citizens, concern for welfare of the poor, the women & marginalized will always be a source of inspiration.

© AFP 2021 / GERARD JULIEN
Fidel Castro’s Cuban Revolution ‘Quixotic’ – Uruguayan Ex-president
They were also sharing her clips of interview with Simi Garewal, a former Indian actor, and a talk-show host. So much so that Garewal, the forgotten cine star, was trending among top twitter trend in India.

The late leader's mortal remains were kept for a day. Supporters came in large numbers to pay their last respect to her, as also during her funeral procession. However, the situation remained under control.