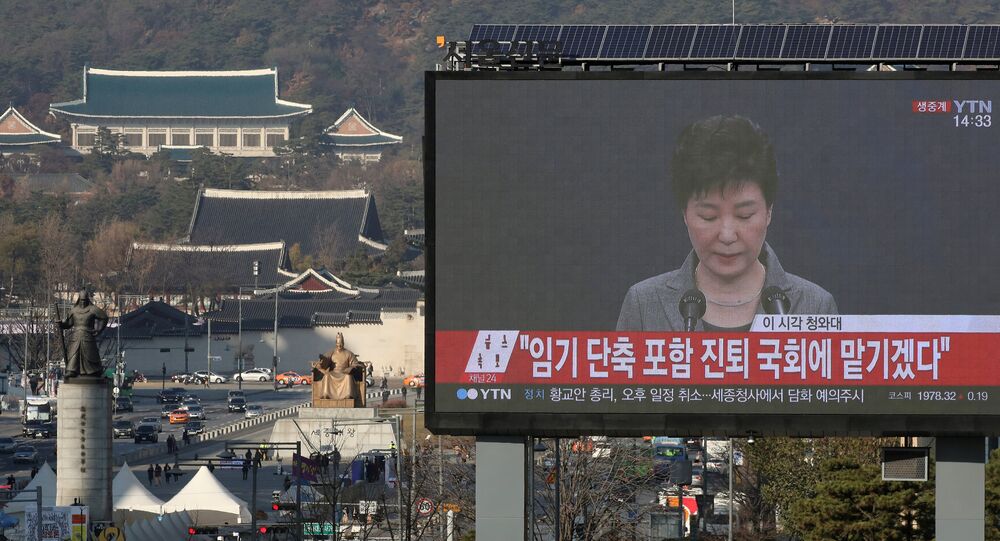 Early presidential elections in South Korea are inevitable, and although it creates favorable conditions for the opposition, a prominent conservative candidate might yet appear, Kim Byung Min, a professor of Kyung Hee University in Seoul, believes.

© REUTERS / Kim Hong-Ji
South Korea 'Shaman Gate': President's State Policy Decided by Cult
In October a scandal erupted around South Korean President Park Geun-hye after local media reported that her official speeches were edited by her childhood friend Choi Soon-sil who had no position in the presidential administration or any political experience or education, and was in fact associated with a cult. Later Choi Soon-sil was accused of extorting billions worth of donations to her foundation from local businesses. Since the information came to light, there have been a seemingly continuous series of mass demonstrations in Seoul demanding Park’s resignation.

On Saturday it was reported that three South Korean opposition parties handed an impeachment motion against the embattled president to the national parliament. The impeachment bill will be formally tabled in parliament during a regular session on Thursday, with a vote expected the following day.

“The stance of the ruling party is that President Park should resign in April, so it is unlikely that there will be 28 deputies ready to endorse her impeachment now,” Kim Byung Min told RIA Novosti.

According to him, nevertheless, there is a slight possibility that it could still happen because of the sheer volume of public dissatisfaction, which has even included torch-light marches.

If the impeachment is approved, the president loses her powers immediately and they will be passed on to the prime-minister. After the impeachment is approved by the Parliament, the Constitutional Court will consider it within a maximum period of six months. If six of the nine judges approve it, the president will be officially removed from power. Within two months the elections of a new president will be conducted, Kim explained.

If the president resigns by herself

If President Park Geun-hye promises to resign in April 2017, as the Saenuri Party plans, elections will be carried out within two months and a new president will be elected in June.

“In that case the ruling and the opposition parties will stably lead the country in cooperation with each other until the president leaves her office,” Kim said.

He stressed that despite Park formally retaining her post, practically all her powers will be handed over to the prime-minister.

Candidates for the presidency

The expert believes that Moon Jae-in would make the strongest candidate. At the 2013 elections he ran for presidency as the opposition leader and lost to Park Geun-hye by a narrow margin.

“However amid the current political chaos he has not shown himself as a leader able to tackle the situation, which raises questions about his administrative skills,” Kim said.
According to the expert, there is no “appropriate candidate” in the ruling circuses now, while the hopes rest upon current Secretary-General of the United Nations Ban Ki-moon.

“Although there is almost no chance that Ban Ki-moon will join the Saenuri Party, in view of the upcoming elections – he might join forces with the ruling party to form a coalition government,” Kim Byung Min assumes.

That will create favorable conditions for the opposition as far as early elections are expected to follow. “However, if the conservative forces are renewed and gain a strong leader, new perspectives will emerge,” the expert says.

Political chaos will not last

Professor Kim Byung Min believes that political chaos in the country will not last long.

“The South Korean administrative system has a solid foundation and civic consciousness is very embedded in society, so the probability of political chaos setting in is very low,” the expert believes.

According to him, the situation makes either impeachment or resignation of President Park Geun-hye inevitable, because South Korean people need a new president to give the country a new start.

President Park Geun-hye’s presidential term expires in February 2018. If not for the corruption scandal, new presidential elections would have been held at the end of 2017.