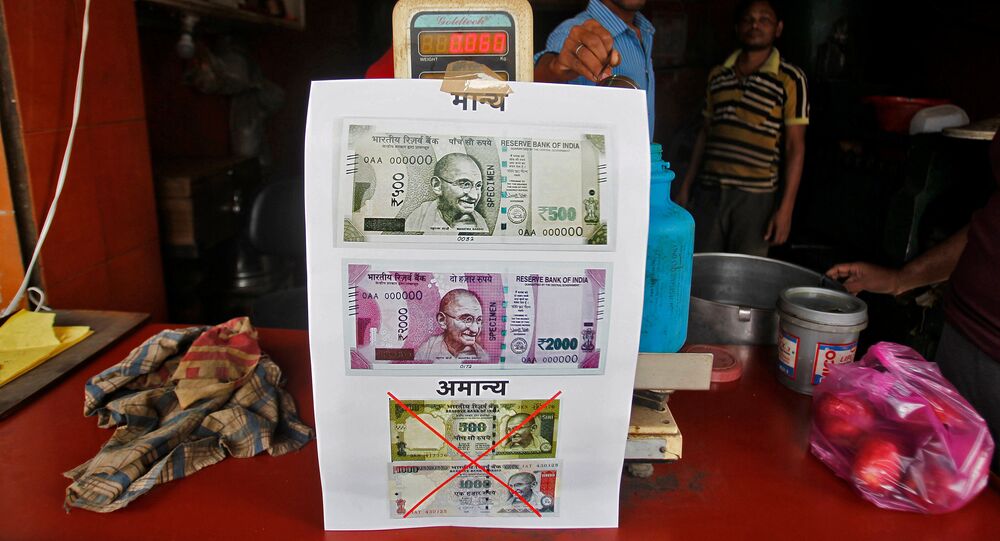 India’s currency-GDP ratio is the highest in 16 years and this fact may not change in the near term despite PM Narendra Modi’s aim to demonetise high-value currency notes.

bookmychotu.com
India Logs On to Errand Boys to Stand in ATM Queues
New Delhi (Sputnik) — Long serpentine lines outside banks and ATMs for the past two weeks is ample evidence of Indians’ preference for cash-in-hand despite Prime Minister Narendra Modi’s bid to demonetize high-value currency notes.

The stark reality is that India is essentially a currency driven economy despite a huge increase in the share of plastic money and digital transactions and the government’s attempt to further encourage their use. That may not change in the near future. India leads among BRICS (Brazil, Russia, India, China and South Africa) nations with the currency in circulation as a proportion of gross domestic product (GDP). At 10.6 per cent at the end of March this year, India’s currency-GDP ratio is the highest in 16 years.

India's currency-GDP ratio crossed the 10% mark in 2007-08 and has remained above the double digit mark except in 2009-10 due to the global financial crisis which impacted the Indian economy as well. The currency in circulation has been growing over the last few years.

Compared to India, China has seen a steady decline in the ratio during the same period, indicating that the country is moving towards a cashless economy. China's currency-to-GDP ratio, declined to 9.1 per cent in 2015 from 14.6 per cent in 2000. Interestingly, China and India had the same currency-GDP ratio between 2008 and 2012.

​Russia’s ratio, although quite high at 9 nine per cent, has been declining for the last five years. Brazil’s ratio has remained around three per cent for a decade while South Africa at 2.5 per cent is the lowest among BRICS nations.

The developed countries such as the US, the UK and Japan have however seen an increase in their currency-to-GDP ratios. This could be because the ratio for developed nations also reflects the currency held outside those countries.

The Bitter-Sweet of India’s #Demonetisation Drive