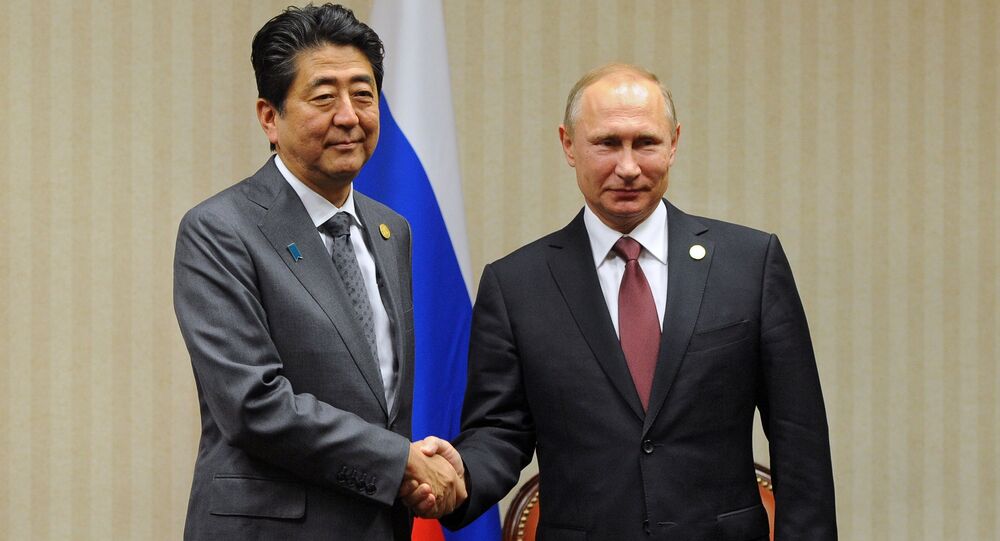 Tokyo and Moscow will barely able to solve the issue of a permanent peace treaty just after one joint summit and relations with Russian President Vladimir Putin based on trust could contribute to the signing, Japanese Prime MInister Shinzo Abe said Tuesday.

TOKYO (Sputnik) — Abe said that signing a peace treaty is not an easy task and requires trust-based relations with president Putin.

"We want to gradually move toward it… one summit is not enough to reach a decision, it is not such an easy question," Abe said at the press conference, as quoted by the NHK broadcaster.

He added that both Moscow and Tokyo were interested in development of ties between the two countries, including in the sphere of economy.

© AFP 2020 / IVAN SEKRETAREV / POOL
Japan Attaches Great Importance to Meetings Between Putin and Abe
Japan and Russia never signed a permanent peace treaty after World War II due to a disagreement over four islands, which Russia calls the Southern Kurils and Japan the Northern Territories, encompassing Iturup, Kunashir, Shikotan and Habomai. Speaking at the press conference, Abe stressed that Tokyo's position in regard to the issue of the islands had not changed, adding that the countries should strive for mutually beneficial outcome.

The relations between the two states have recently been re-energized. In September, Abe took part in the Eastern Economic Forum in Vladivostok, during which he held three-hour talks with the Russian president. One of the outcomes of the meeting was the announcement of Putin's visit to Japan on December 15, which has been postponed from 2014.