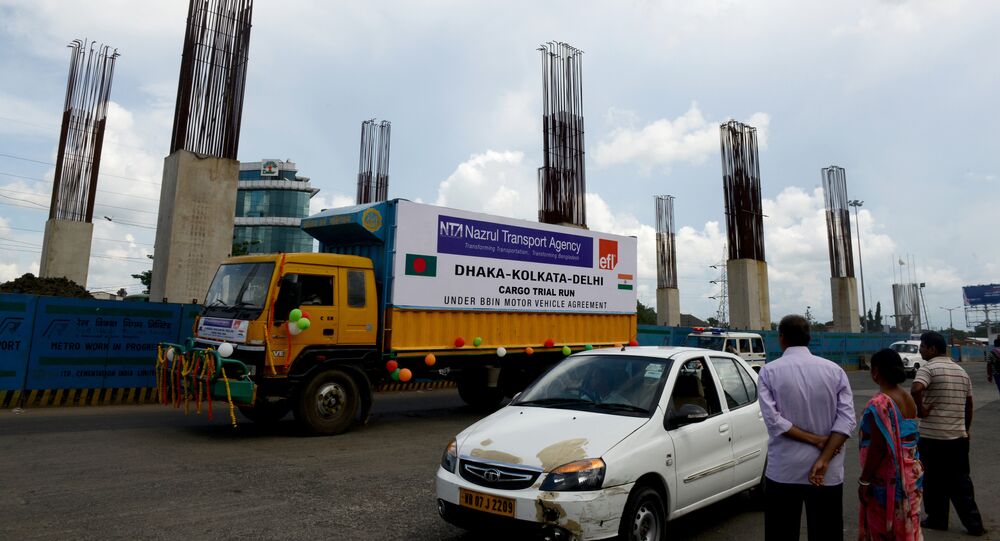 © AP Photo / Arun Sankar K
Can India Beat China at Its Game With Common Satellite for South Asia By Next Year?
New Delhi (Sputnik) – Bhutan, the most acquiescing of India’s neighbors, has derailed Indian Prime Minister Narendra Modi’s plans for seamless connectivity among its neighbors except Pakistan.

Bhutan had gone by India’s wishes by boycotting the SAARC summit in Islamabad and turning up for the BIMSTEC meet on the sidelines of the BRICS summit in Goa.

But it seems to have developed second thoughts on an Modi’s pet sub-regional connectivity project. The upper house of Bhutan Parliament did not pass the motor vehicle pact which is essential for the Bangladesh, Bhutan, India and Nepal (BBIN) Agreement.

There have been unverified charges of a Chinese hand. Beijing has repeatedly tried to engage Bhutan and both sides recently held talks to resolve their border dispute.

“China is presently focusing on the South Asia Geo-politics. After increasing its influence in Pakistan and Nepal, it is expanding its presence in Bhutan. Bhutan and India have ancient links and India has played a major role in Bhutan’s economic development. But China recently established diplomatic relations with Bhutan to counter India’s influence in South Asian region,” Srikanth Kondapalli, Professor of Chinese Studies at the Jawaharlal Nehru University told Sputnik.

The BBIN Agreement among was signed in Bhutan in July this year and will become operational only when it is ratified by all the four countries. The other three countries have already ratified the agreement.

The BBIN Agreement will provide smooth and easy flow of goods and passengers vehicles among India, Bangladesh, Nepal and Bhutan.

Non ratification by Bhutanese parliament is a major setback to India’s efforts for sub-regional connectivity which will hugely benefit India.

In fact, earlier also India’s push for regional SAARC connectivity was thwarted when Pakistan did not agree to India’s initiative of SAARC regional connectivity agreement.

Bhutan upper house has expressed concerns over the environmental impact of allowing large number of vehicles entering their country.

Although India is hopeful that Bhutan will ratify the pact as it is in the interest of all the participating countries.

“We hope that the Royal Government of  Bhutan will be able to complete necessary internal procedures for operationalization of the agreement at an early date,” Ministry of External Affairs Spokesperson Vikas Swarup told the media.