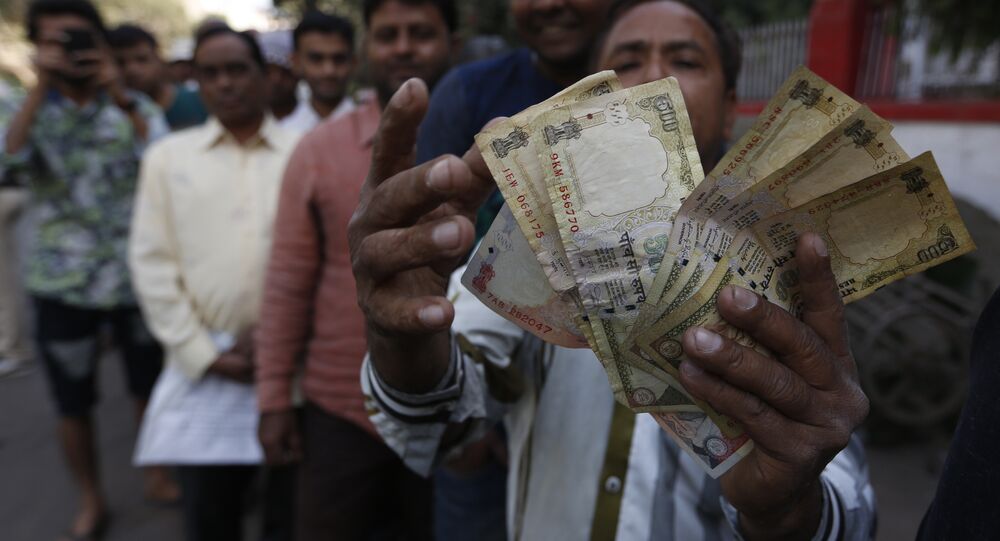 Currency reform announced last week by the government of India may lead to food shortages and rise in prices, the state general secretary of Paschimi Uttar Pradesh Transport Association (PUPTA) said on Tuesday.

NEW DELHI (Sputnik) — On November 9, Indian authorities initiated a currency reform aimed at fighting corruption and shadow economy, under which the banknotes with the nominal value of 500 and 1000 rupees (about $8 and $15) will be withdrawn from circulation. Citizens have to spend hours in line to change the old banknotes for the new ones, while there is a limit on withdrawing new banknotes.

"As over 80% of the commodities are supplied in the country by trucks rather than trains, it may cause shortage of commodities, including vegetables and pulses. It can lead to spiralling prices, causing panic among citizens," Amarjeet Singh Bakshi was quoted as saying by The Times of India.

© AFP 2021 / PUNIT PARANJPE
Indian Infrastructure to Provide USD 375 Bln Opportunities for Investors
He added that about 40 percent of trucks were stranded in the Uttar Pradesh state since November 10 as the drivers needed "low-denomination notes to meet expenses," and companies simply did not have enough cash in lower denominations.

"If the problem continues for a week, a condition of unofficial strike will prevail," Bakshi said.

According to him, a special meeting will be held soon to discuss the issue, while the elaborated proposals will be sent to Prime Minister Narendra Modi.

Another problem was reportedly connected to loading and unloading of the goods, as the traders also could not pay the laborers due to lack of money. Therefore, it could lead to scarcity of commodities across India.

Can India Convince Trump to Walk Back From Job-Busting Travel Restrictions?