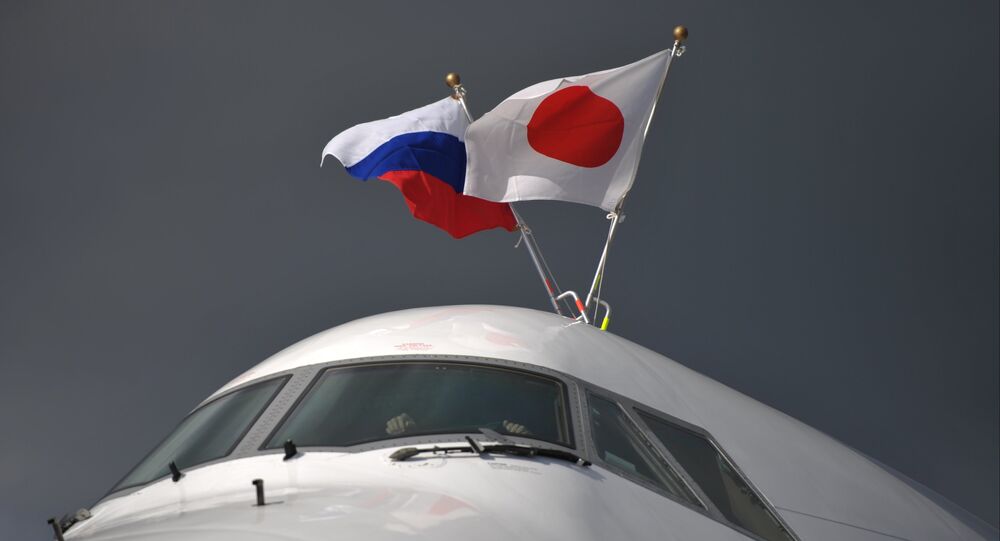 Donald Trump's ascendency presents both a risk and opportunity for Tokyo, if it can successfully adapt to its new-found independence from Washington, expert in Japanese affairs Andrey Fesyun told Sputnik.

© AFP 2021 / Munir uz ZAMAN
Can Modi’s Tokyo Visit Bring About a Big Bang Moment in India-Japan ties?
The election of Donald Trump came as a shock to the markets in Japan, where the Nikkei 225 plunged by 5.36 percent as the result became clear on Wednesday. However, the index soon regained its losses amid a post-election rally: the Nikkei rose by 6.7 percent on Thursday, and had risen another 0.18 percent by Friday afternoon.

As the unexpected result came, in the yen surged by more than three percent against the dollar on Wednesday, a rise which has since been offset by the dollar's attractiveness to investors, who predict Donald Trump's proposed economic policies are inflationary in nature, and would allow the US Federal Reserve to raise interest rates.

On Friday the dollar had recorded a rise of 3.17 percent against the yen compared to a week earlier, which led Japanese Finance Minister Taro Aso to comment on the importance of market stability.

"It is exceptional for the yen to move 5 yen (against the dollar) in two days," Aso said.

As the expectation of a Hillary Clinton presidency gave rise to some economic uncertainty for Japan, Tokyo is also coming to terms with the political implications of Donald Trump's presidency.

Andrey Fesyun, an expert in Japanese affairs at Russia's Higher School of Economics, told Sputnik that Trump's election presents risks and opportunities for Japanese politicians, who are used to carrying out orders from a Washington deeply interested in its affairs.

"Relations between Japan and the US under the new president are likely to be more independent. On one hand that's a good thing for Japanese business, but it might not be a very comfortable situation for Japanese politicians because they are used to be dependent and carrying out demands from Washington," Fesyun said.

© Sputnik / Michael Klimentyev
What is Driving Japan's Flexible Approach to Territorial Dispute With Russia?
However, Trump's pre-occupation with domestic issues could give Tokyo a chance to nurture closer relations with Pacific neighbors like Russia.

"It is interesting that Japanese-Russian relations will have a more privileged status in this context. Trump probably won't try to exert any kind of constraining influence on them (the Japanese). In that sense, Trump's election gives Russia a good chance to further deepen its relations with Japan," Fesyun said.

During a campaign rally in Iowa in August, Trump warned US ally Japan that he would re-negotiate the terms of their defense treaty, requiring the country to spend more on defense.

"You know we have a treaty with Japan where if Japan is attacked, we have to use the full force and might of the United States," Trump said.

"If we’re attacked, Japan doesn’t have to do anything. They can sit home and watch Sony television, OK?" Trump said.

He also attacked the cost of US troop deployment in Japan, where approximately 50,000 US military personnel are stationed.

The president-elect said he had been told that Japan pays "50 percent of the cost" of basing US troops there.

© AP Photo / Eugene Hoshiko
Tokyo Paying ‘Enough’ for US Forces Deployment in Japan - Defense Minister
On Friday Japanese Defense Minister Tomomi Inada said that US troops should stay in Japan, but that Tokyo is not willing to pay more than the roughly 200 billion yen ($1.9 billion) per year it currently pays to support the troops, which is actually about 70 percent of the total cost.

Fetyun told Sputnik that Japan will probably have to increase its own defense capabilities under a Trump presidency.

"Japan knows it will have to pay a lot more money for its own safety. However, that doesn't mean an end to the US troop presence and atomic weapons in Japan, since the Chinese threat remains on the same high level as before. Because of that, the mutual defense treaty between the US and Japan remains just as important as it was under the last president."

"Of course, Tokyo will have to spend more on defense, but I think the Japanese economy can withstand it," Fetyun said.

However, Trump's concern for the US economy may mean a closer relationship for China, which could complicate the close US-Japan relationship.

"As a politician, Trump is more focused on the immediate US economic situation, and as a result he will give more attention to economic links with China. It seems to be that he will try and improve them, as far as that is beneficial for the US. In this beautiful American-Chinese tandem, Japan might turn out to be the odd one out. From an economic point of view it can't be ruled out that Tokyo loses out under the new president," Fetyun said.