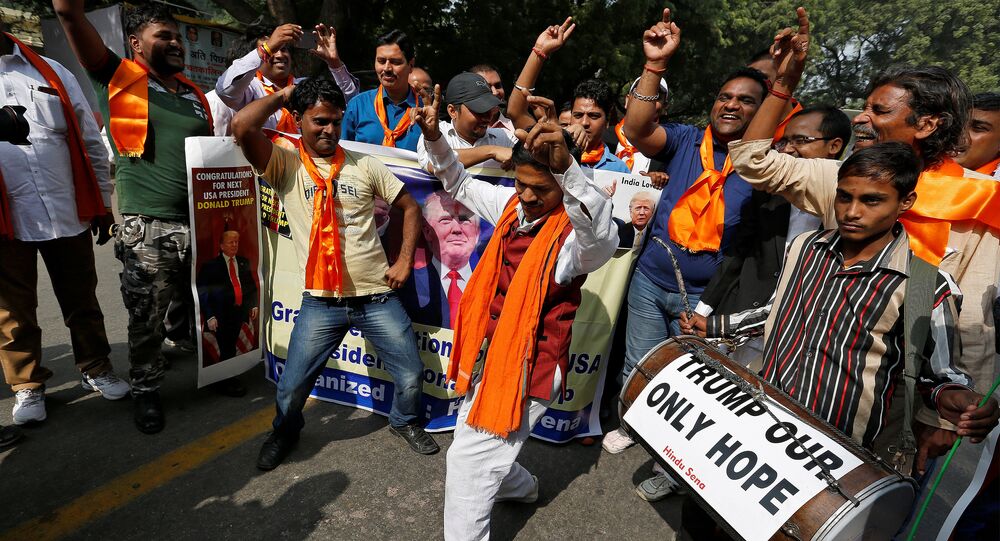 Hindu Sena, a far-right group in India noisily celebrated Donald Trump's win in the heart of New Delhi. The group had previously made news by holding prayers to boost Trump's electoral chances.

NEW DELHI (Sputnik) — A far-right Hindu group in India, one of Donald Trump's avid overseas supporters, celebrated Donald Trump's success in the US elections on the streets of New Delhi.

"We had predicted his win five days ago — he had huge support for his ideas and we could see that. He has always given positive statements about India and Hindus. He has also denounced Pakistan," said Vishnu Gupta, Hindu Sena's leader.

Nobody would believe #Trump could win. It was the 'Hindu Sena' who did a Havan and you see the results.
Power of Hinduism. pic.twitter.com/ueXMtm1MJe

​Trump's hardline rhetoric towards Muslims has found immense favor in some fringe quarters in India, the second largest home for Muslims in the world after Indonesia.

"Now terrorists will be hunted everywhere in the world. Now only God can help Pakistan. US will now support Indian efforts against terrorists. We will be together in this. Donald Trump will do what no other US President has been able to do before," he added.

Although most Hindus live peacefully with Muslims in India, inter-communal ties are far from ideal. There are periodic bouts of tensions and violent flare-ups over sectarian issues.