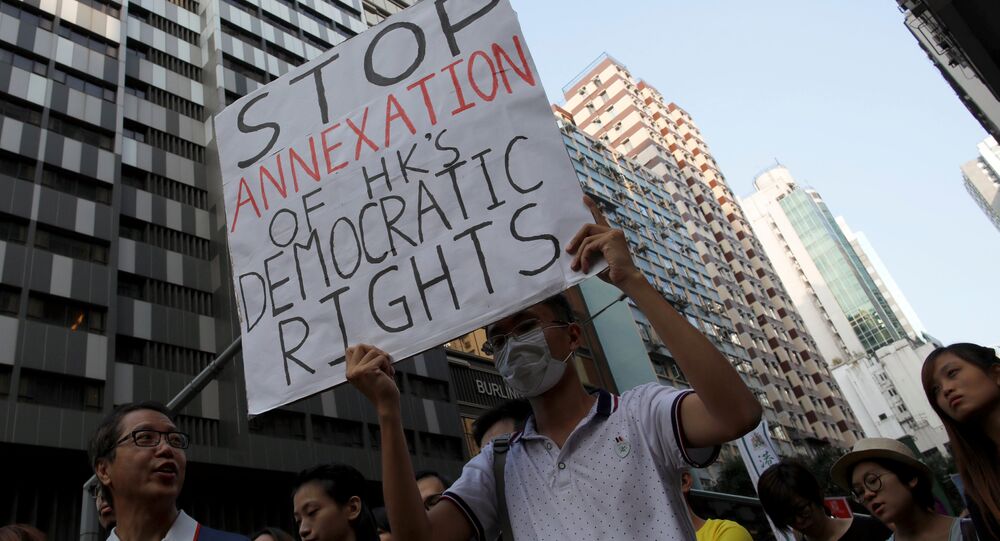 How Foreign Powers Attempt to Destabilize the Situation in Hong Kong

In the follow up to the recent US comments on the legal tensions between China and its administrative region Hong Kong, Russian political analysts told Sputnik that certain external powers, namely the US and the UK, are trying to destabilize the situation in the country, branding it as an instigation and interference into China's internal affairs.

Commenting on the recent tensions between Beijing and China's administrative region of Hong Kong over what the latter believes to be "Beijing's interference with Hong Kong's legal system", the US expressed "disappointment" over what it called China’s "intervention in a political dispute."

US State Department spokesman Mark Toner on Monday urged the Chinese and Hong Kong governments to "refrain from actions that undermine confidence” in the so-called one-country, two-systems principle.

© REUTERS / Bobby Yip
A protester stands in front of policemen outside China Liaison Office during a confrontation in Hong Kong, China November 6, 2016

The comment comes in the follow up to recent tensions between the two after Beijing prevented two elected Hong Kong politicians who support the city's independence from China from joining parliament.

Speaking at his regular press conference on Tuesday, he stressed that the Standing Committee of China's National People's Congress is "exercising its lawful right endowed by the Basic Law and fulfilling its obligation under the Constitution."

© REUTERS / Tyrone Siu
Protesters are pepper sprayed by police during a protest against what they call Beijing's interference over local politics and the rule of law, a day before China's parliament is expected to announce their interpretation of the Basic Law in light of two pro-independence lawmakers' oath-taking controversy in Hong Kong, China, November 6, 2016

"This is completely within China’s sovereignty and other countries have no right to interfere," the spokesperson said.

He also added that "as is clearly seen, certain 'Hong Kong independence' forces have been plotting to split China and seeking foreign support to this end. It is their heinous acts that pose the biggest threat to “one country, two systems.”

"We ask all relevant countries to honor their open commitments, watch their words and deeds and not interfere in Hong Kong’s domestic affairs nor endorse any pro-independence forces," Lu Kang said.

Commenting on the US remarks, Deputy Director of the CIS (Commonwealth of Independent States) Institute Vladimir Evseev called it instigation and interference into China's internal affairs.

"It is absolutely evident that the US is trying to destabilize the situation in Hong Kong. Washington is using every opportunity to create problems for China," he told Sputnik.

© REUTERS / Tyrone Siu
China Passes Controversial Interpretation of Hong Kong's Basic Law
"It also applies to Xinjiang (an autonomous territory in northwest China), Tibet (another autonomous area), Taiwan and Hong Kong. It is absolutely clear that it is interference into China's internal affairs," he added.

The political analyst also suggested that the recent protests in Hong Kong might have been staged with US assistance, which is absolutely unacceptable. In this case, he said, China has every right to restore order in its territory.

However, he noted that Beijing had refused to bring in the army, and had resorted to only using police forces and restricted measures.

The measures China resorted to in Hong Kong were by no means tougher than those the US uses on its own territory, he said. The US, in turn, has repeatedly used force to restore order on its territory. And before telling China how to deal with Hong Kong, Washington is best advised to sort out its home affairs, such as numerous killings of Afro-American citizens by police.

© Sputnik / Alexander Vilf
Rally Against Beijing's Interpretation of Hong Kong's Basic Law Turn Violent
He reminded that those training programs were conducted either by experts from the US or the UK.  Education legislation in Hong Kong is quite liberal and does not require any additional licensing.

"This has been widely used by different foreign funds, including the American secret services, which are trying to manipulate public opinion in Hong Kong," he told Sputnik.

He further explained how it is being done through the country's young people. The first stage of the country's so-called "umbrella revolution" stemmed from the results of the discussions on the democratic freedoms and rights at such training programs.

The American mass media often discusses how rights and freedoms are allegedly restricted in Hong Kong. Taking into account that every citizen of the district has open access to the internet in any country of the world, it is natural that all of them have access to such discussions.

"The main aim of such an information hoax is not for Hong Kong to proclaim its independence, but to destabilize China and to demonstrate to the whole world that Beijing suppresses basic freedoms and the rights of its citizens," the expert said.

"The so-called 'umbrella revolution' has never actually stopped. There are still posters with white and yellow umbrellas in many windows of Hong Kong buildings. They demonstrate the simmering conflict," Maslov said.

© REUTERS / Tyrone Siu
Hong Kong Activists Join Silent Parade to Protest Beijing's Interference
However he further suggested that the authorities of the district had learned a painful lesson during the "broken umbrella revolution", and won't allow the negative sentiments which are being stoked from abroad to spill into the city streets. Otherwise it will have a negative impact on the overall situation in Hong Kong, including its economy.

This view is echoed by Andrei Karneev, Deputy Director of the Institute of Asian and African Studies at Moscow State University, who told Sputnik that it would have been naïve not to connect the developments in Hong Kong with external influence.

He said that even the American political establishment does not conceal that they support the so-called "pro-democratic" movement in Hong Kong.

He commented to Sputnik on the evident similarities between the "umbrella revolution" in Hong Kong and "color revolutions" in the Middle East and North Africa.

© Sputnik / Alexander Vilf
Hong Kong Chief Executive Confirms Two Lawmakers Barred From Office
"Any movements which are being fueled by the ideas of the so-called 'greater democracy' have something in common. However it is quite hard to analyze whether all of them are links in one chain or are being led by one and the same source," he said.

He further explained that the difference between the "umbrella revolution" in Hong Kong and similar movements in the Middle East and North Africa is in the background of the protest movements.

For the Middle East and North Africa, he said, it was mostly complicated social-economic conditions, while Hong Kong is one of the most prosperous areas in Asia. Thus it is quite difficult to compare it with countries such as Ukraine, Georgia or Kyrgyzstan.

Hong Kong is a highly-developed society with a well-developed legal system and information transparency.  Hence in Hong Kong the electorate wants to directly participate in the administrative elections.

Besides, unlike in Libya or Egypt, there was no irremovability of power in Hong Kong. Hong Kong, alongside with Singapore, has a very low level of corruption by Asian standards. Thus one should not draw some oversimplified parallels with the "color revolutions" of the Middle East and North Africa, he warned.