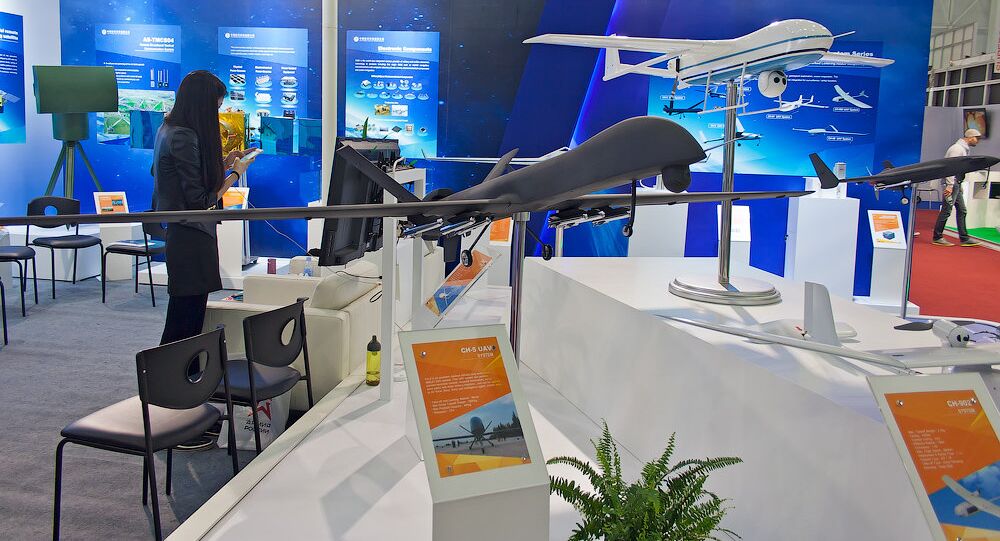 China's new CH-5 drone is currently on display at the 2006 International Aviation and Aerospace Exhibition in China, according to local media.

This high-altitude, long-range drone was developed by the China Aerospace Science and Technology Corporation (CASC); it can carry armament and is known to be the heaviest UAV China manufactures.

In an interview with Sputnik China, Russian military expert Vasily Kashin said that Beijing has continued to confirm its role as a leading manufacturer of combat drones during the air show in Zhuhai.

The CH-5 has been used in actual hostilities in the Middle East and North Africa, and is especially noted for its substantial flight duration. The basic version of the drone's flight time may exceed 40 hours; with modifications, it can stay in the air about 130 hours, according to Kashin.

He said that the drone's range currently totals more than 6,500 kilometers, with its combat load amounting to at least 900 kilograms.

Given that that the CH-5 can be operated with the help of a satellite, this drone can effectively add to fighting rebel movements, which Kashin said has become the main kind of present-day hostility.

"In this sense, many in the Middle East, North Africa and Central Asia see Chinese drones as more attractive [as buyers] than those made by the US," Kashin said, referring to the Chinese UAVs' advanced characteristics and low cost.

He also pointed to a whole array of relevant legal conditions which he said are part of any US deal on the supply of weapons to developing countries.

© AP Photo / Jason Lee/Pool Photo
A military vehicle carries a Pterodactyl I unmanned aerial vehicle past the Tiananmen Gate during a military parade to commemorate the 70th anniversary of the end of World War II in Beijing Thursday, Sept. 3, 2015

"The ability to provide its partners with effective combat drones in the current situation is a valuable political tool that the Chinese will use to an ever-increasing degree," Kashin added, citing the CH-5 and the Pterodaktyl UAVs, which he said are only part of what Chinese industry currently produces.

On the one hand, China is able to offer relatively simple and massive tactical drones for artillery reconnaissance and on the other – it makes complex drones with the help of stealth technology, such as the CH-805, which was also presented at the Zhuhai Air Show, according to Kashin.

© AFP 2021
Chinese Leader Calls to Create Modern, Disciplined Army Able to Win
These drones can be used for drilling air defense units to combat stealth aircraft, or can serve as a platform for surveillance systems used in conditions where there is strong enemy resistance, he added.

China also creates heavy strategic reconnaissance drones akin to the US-made Global Hawk, which Kashin said will be of importance to activity over the Pacific Ocean.

"As a result, Chinese promotion will continue in all areas of the world UAV market," he concluded.

No Pain, No Gain! Hardcore Training Methods of the Chinese Military