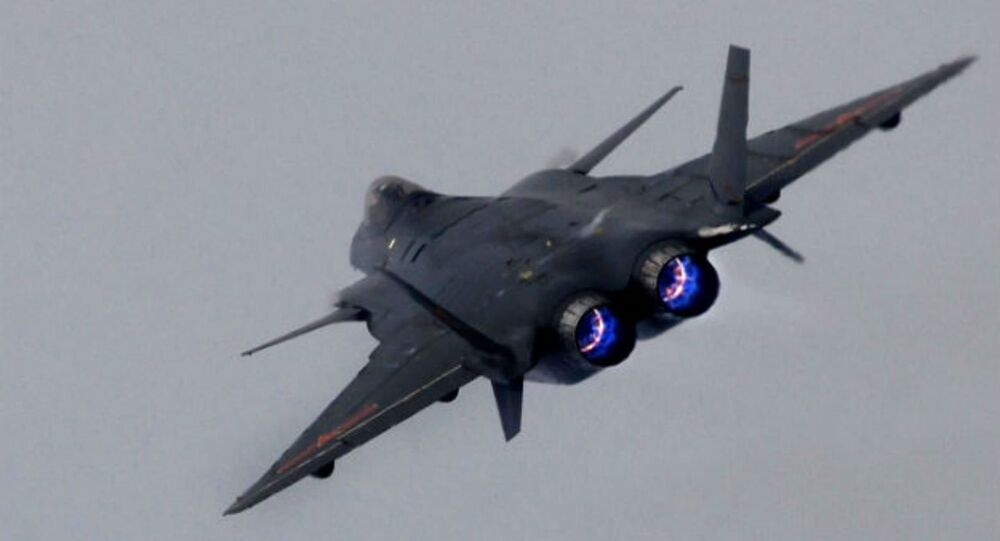 PLAAF spokesman Shen Jinke said that production of the J20 is on schedule and its deployment will "safeguard sovereignty and national security." Shen added, "This is the first public appearance of China's indigenously manufactured new generation stealth fighter jet."

© AFP 2021 / STR
One Week After US Patrol, Beijing to Conduct Military Drills in South China Sea

Beefing up Beijing’s air combat capabilities will be central to China’s plans to take a more aggressive stance in the region, especially in the disputed East and South China Sea areas. China’s research into submarines and other new military technology has concerned some in Washington, but the country downplays concerns by claiming that it is engaging in the sensible development of its own defense.

The Xi’an H-6K bomber, the Shaanxi KJ-500 Airborne Early Warning (AEW) aircraft, and the Chengdu J-10B multirole fighter will also be on display, near Guangdong at the Zhuhai airbase. A "secret combat aircraft," advertised by organizers as part of the flying display, was thought to be the Chengdu J-20 stealth fighter, but the craft did not originally appear on line-up lists.

Fueling speculation were two J-20s, complete with new paint, that were seen flying formations and executing maneuvers over the facilities at the Chengdu Aircraft Corporation.

Serial tail numbers of the J-10Bs will be a part of the Guilin, Guangxi-based, 2nd Air Division, 5th Regiment. A longer nose radome, electro-optic targeting sensor (IRST), a new ECM/EW suite, and a Diverterless Supersonic Inlet (DSI), separate the J-10B from the J-10A. The aircraft also features missiles, targeting pods, ECM pods, and air-to-ground precision-guided bombs in its static display.

The year 2015 saw the KJ-500 surveillance aircraft enter service with the PLAAF, recently deploying with the Chinese Navy’s aviation unit. Functioning on an AEW platform, the KJ-500 is based on the Shaanxi Y-9 turboprop, which is also in service with the Air Force. Several unnamed aircraft will also be featured at the Zhuhai exhibition.

The CH-5 Medium-Altitude Long Endurance (MALE) drone, manufactured by China Aerospace Science and Technology Corporation (CASC), debuted in August 2015. CASC reports that the CH-5 has a payload of one metric ton, an endurance period of up to 40 hours, a 69-foot wingspan, and weighs 3.3 metric tons.