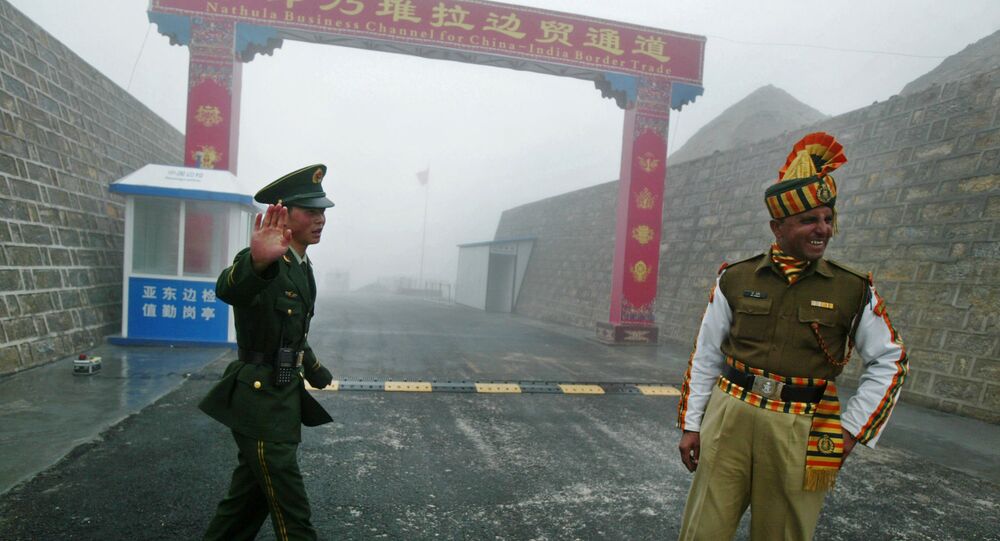 According to a paper published in the Indian Defense Review, Beijing and New Delhi need better knowledge of each other, including information gathered via spying. Russian military expert, Vasily Kashin, spoke to Sputnik China about the intelligence gathering between the two countries and their bilateral ties.

© AFP 2021 / PRAKASH SINGH
Crucial India-China Meeting Ahead to Discuss Anti-Terror Cooperation
The article by Nicolas Groffman regarding the intelligence capabilities of China and India with respect to one another touches upon an important subject of regional policy.

The article “Guess what India and China need to improve relations? More spies” was published in the Indian Defense Review.

It stressed that China and India need a basis in intelligence to improve their relationship. “The two countries are ignorant of each other’s strategies, with suspicion taking the place of intelligence just when understanding is critical,” Groffman wrote.

According to Vasily Kashin in an interview with Sputnik China, the article highlights some important points such as the active and effective intelligence activities of major powers and how they may indeed have a stabilizing effect on international relations.

This stabilizing effect can be reached however if it does not go beyond certain limits. “For example, if it is not accompanied by an active intervention in the internal affairs or acts of sabotage,” Kashin said.

In the past, the low level of China's and India's awareness of each other’s capabilities and intentions played a fatal role in the emergence of an armed conflict between the two countries in 1962.

“In particular, it was seen when the Indian side systematically underestimated China's military capabilities in the area of the Sino-Indian border in Tibet. China was determined to defend its interests so the Chinese did not quite correctly understand India’s intentions and motives in the territorial issue,” the expert said.

© AP Photo / Xinhua, Li Gang
India Conducts Joint Military Exercise With China
According to Kashin, the military intelligence determines its tasks in accordance with military policy priorities and perceptions of threats to the military leadership.

“The Chinese armed forces are currently being strengthened mainly as the basis of opposition to the US and Japan in the Pacific. India, of course, plays a less significant role in the Chinese military planning at the moment but it cannot be said that India is not getting any attention at all. Regular PLA exercises are accompanied by a substantial deployment of forces into the Chinese Tibet.”

He further said that China is conducting tests of its military hardware in order to identify opportunities for exploitation in the high mountains.

In the current era, the capabilities of the Chinese military intelligence services include radio-electronic intelligence, cyber intelligence and space reconnaissance.

“After the reforms at the end of 2015 through 2016, this unit was called Strategic Support Force. It is a giant technical intelligence unit, comparable in its scope of activities and opportunities only to the US National Security Agency,” Kashin said.

The military expert further said that according to some Indian open publications released in recent years, Indians have recorded a high level of activity of the Chinese technical intelligence in regard to India.

“With regard to human intelligence services, relating both to the army and to the Ministry of Public Security and the Ministry of State, it is obvious that for China it is important to be able to penetrate into the political structure of Tibetans living in India,” the expert said.

© AP Photo / Mark Schiefelbein
India's Low Cost Manufacturing Poses Major Threat to China
In addition, the close nature of Sino-Pakistani relations in the sphere of security, suggests that the Pakistani intelligence with Chinese are not just communication channels, but it also presents an opportunity to conduct joint operations.

As stated in the paper, Chinese intelligence still works by “thousand grains,” the technique of combining dissimilar snippets of intelligence accessed from various sources.

According to Kashin, “Indo-Chinese trade exceeded $70 billion in 2015. This means that the two countries have close ties, a significant amount of movement of goods, capital and people — favorable conditions for collection of information. How are they used- we don’t know.”

The expert further said that due to this lack of information there is no reason to believe that China is not active and successful in collecting intelligence data in respect to India.

“How accurate and correct is the assessment of India by the Chinese government, also remains unknown,” Kashin concluded.