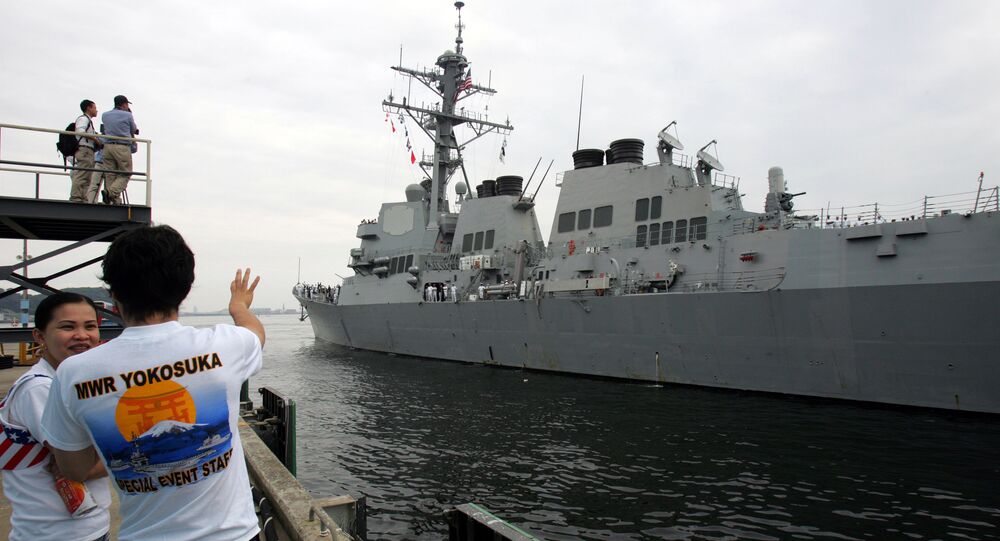 The North Korean Foreign Ministry has issued a statement condemning the joint US, Japanese and South Korean naval drills taking place in the Korean Peninsula over the weekend, warning that such maneuvers "constitute a threat to the DPRK (the Democratic People's Republic of Korea) and the whole of Northeast Asia."

On Saturday, US, Japanese and South Korean naval forces kicked off large-scale two day drills near South Korea's Jeju Island. The drills involve a destroyer equipped with the Aegis Combat System, as well as several dozen other ships, helicopters and maritime patrol aircraft from the three countries.

© AFP 2021 / TED ALJIBE
US, Japan, South Korea to Hold Maritime Drills Off Jeju Island on Weekend
Rodong Sinmun, the official press organ of North Korea's Workers' Party, issued an official response from the country's Foreign Ministry, cryptically suggesting that the US-led alliance "is no longer a mere specter, but takes on a concrete form as a key force for the implementation of US strategy in the Asia-Pacific region."

Last week, in defiance of the international community, Pyongyang conducted testing of an intermediate-range ballistic missile, the latest in a series of missile and nuclear tests initiated in quickening succession since the beginning of the year.

In its statement for Rodong Sinmun, the North Korean Foreign Ministry accused Washington, which it said has been "increasing their military pressure on North Korea," of "full responsibility for the deterioration of the situation in Northeast Asia." In these circumstances, the Ministry noted, the DPRK "will continue to further strengthen the nuclear deterrent, to ensure peace and security on the Korean Peninsula."

Indeed, amid the North Korean nuclear buildup, the US and its allies have substantially increased large-scale military drills in the area, including near contentious maritime boundaries between the DPRK and South Korea in the Yellow Sea. The latest drills in the area kicked off just last week, and involved the USS Ronald Reagan, along with dozens of other ships and submarines, and included practicing contingency plans for eliminating the North Korean leadership in the event of war.

© AP Photo / Wong Maye-E
What's Behind Secret Talks Between North Korea and US
"This attempted launch is a grave violation of the Democratic People's Republic of Korea's international obligations under UN Security Council resolutions," the Security Council said.

The UN has issued a number of resolutions prohibiting North Korea from activity related to the development of nuclear weapons and the missile delivery capabilities associated with them. In recent weeks, members of the UN have discussed a draft resolution providing for tougher sanctions against Pyongyang, in response to its latest, fifth nuclear test, which was conducted last month. North Korea has rejected the Security Council resolutions, citing its right to self-defense against what it says is aggressive US policy in the region.

While consternated by North Korean behavior, Beijing and Moscow have also grown increasingly concerned over the US decision to deploy its THAAD anti-ballistic missile system on South Korean territory. Washington and Seoul have sought to justify the deployment by citing the North Korean nuclear threat, but China and Russia see the deployment as a threat to regional security. Beijing, in particular, sees the deployment as a possible first step in an effort to cripple the Chinese nuclear deterrent.

Faces of Pyongyang: A Visual Tour Through North Korea's Capital