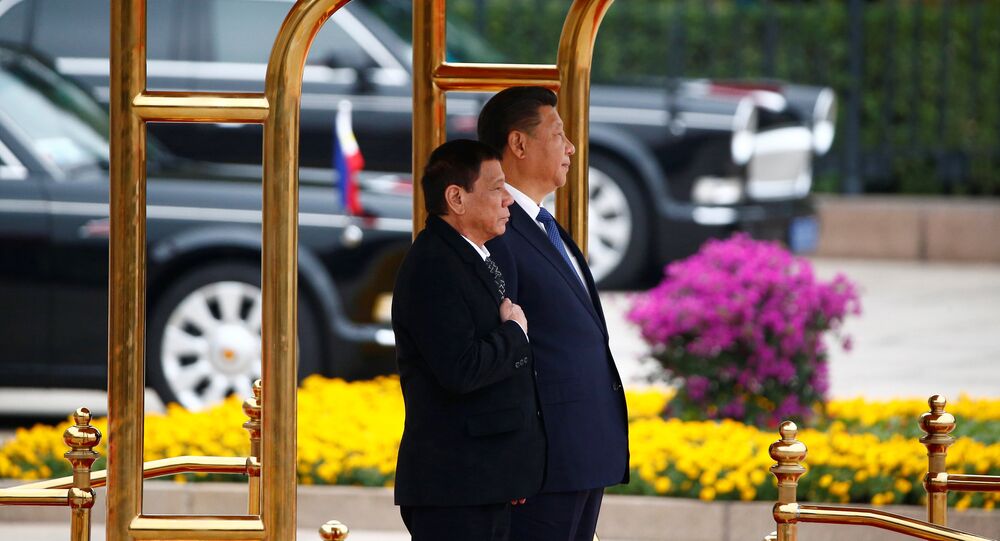 ‘America Has Lost’ - Behind Manila’s Separation From Washington

Philippine President Duterte has announced that his country has separated itself from the US that has consistently backed Manila for some 70 years. Radio Sputnik’s Brian Becker invited Nap Pempeña, vice-chair of Anakbayan-USA, and author Patrick Lawrence to discuss the potentially historic statement and the inevitable geopolitical fallout.

During a visit to Beijing, the president of the Philippines, Rodrigo Duterte, announced a "realignment" of his country away from the United States toward China.

"America has lost now," Duterte said, during a forum in the Great Hall of the People, attended by Chinese Vice Premier Zhang Gaoli.

"I've realigned myself in your ideological flow and maybe I will also go to Russia to talk to [President Vladimir] Putin and tell him that there are three of us against the world — China, Philippines and Russia. It's the only way," he added.

"With that, in this venue, your honors, in this venue, I announce my separation from the United States," Duterte said to sustained applause. "I have separated from them. So I will be dependent on you for all time. But do not worry. We will also help as you help us."

© REUTERS / Ng Han Guan/Pool
Duterte's Change of Heart Triggers Deep Concerns in Washington
The words are geopolitically significant, not only for the denouncing of allegiance to the United States, but also because it was the Philippines, under former President Benigno Aquino, who raised the issue of China's seizure of disputed territories in the South China Sea, by way of a successful lawsuit in The Hague's Permanent Court of Arbitration earlier this year, an issue that has has resulted in tension between China and several countries, including the US and its allies.

"We welcome this development, actually," Pempeña told Loud & Clear host Becker, "because it's the first time in history that Philippines stood up against the US imperialism and is asserting sovereignty and independence from a foreign nation that dominated the country."

"We Americans are the world's greatest forgetters, but other people are not," said Lawrence, referring to the numerous atrocities conducted by American soldiers during the Philippine-American war in the early part of the 20th century, during which at least 15 percent of the population of the Philippines is estimated to have been killed, with prolific use of "scorched earth" tactics, and other less-than-honorable acts of war.

"Duterte's position is driven by economics, he made it clear in Beijing, it is also driven politics, it's driven by pushes of sovereignty and so forth… but there is [also] a certain emotional dimension," Lawrence added.

"I couldn't be more pleased as an American, not because I don't like my country, but because I think we can do better than we have done in Philippines."

"Duterte comes from Mindanao," Pempeña explained, "which is the southernmost island of Philippines," and the area has a large Muslim population, and Muslims in the country have fiercely resisted US domination.

© REUTERS / Thomas Peter
Philippines' Pivots to China, Russia Due to US Growing Increasingly Weak - Trump
According to Pempeña, Duterte puts his own historical and emotional experience, and even upbringing, into his national policies.

The White House responded to Duterte, in the form of a statement from principal deputy press secretary Eric Schultz, who said: "The US-Philippine alliance is built on a 70-year history, rich people-to-people ties, and a long list of shared security concerns […] We continue to be the Philippines' strongest economic partner. Current stock of foreign direct investment is $4.7 billion."

But while the White House described the relations between the countries as a mutual business partnership, that portrayal is far from the truth, according to Becker's guests.

"This is an appalling statement that has nothing to do with reality," Lawrence argued, adding that the Philippine diaspora in the United States is not something that happened naturally and willingly, but was forced by desperation stemming from a ravaged Philippines economy.

© REUTERS / U.S. Navy/Handout via Reuters
Duterte’s Remark on S China Sea Case 'Changes Balance of Power' in Favor of Beijing
Referring to the significant amount of Philippine citizens who fled their homeland to accept whatever work they could find, Lawrence asked, "This is an outcome of a 70-year "partnership" that is supposedly so brilliantly beneficial for Philippines, are you kidding?"

The $4.7 billion figure mentioned by the White House is based on extremely low wages, and on the extraction, or exploitation, of resources in the Philippines by US multinational corporations and military, Lawrence said. Chinese projects discussed in Beijing by Duterte, whose worth suggest a much greater figure of $30 billion, are not based on a "neo-colonial" relationship, Lawrence underscored.

As a result of almost one hundred years of colonial treatment, the Philippines now points out that there is no place for the US in the South China Sea conflict, and, despite Washington's aspiration to defend Manila, the latter has vocally expressed that they do not require that form of protection, and will seek their own peaceful resolution of the conflict with Beijing.

Duterte's strongly-worded comments have struck a nerve in the region, in spite of his administration's back-pedaling, but, in light of the new approach, the Philippines will neither give up its sovereignty to Beijing, nor will it seek to harm Chinese interests in the way the US desires. From now on, this is between the two Asian countries only, Pempeña said.