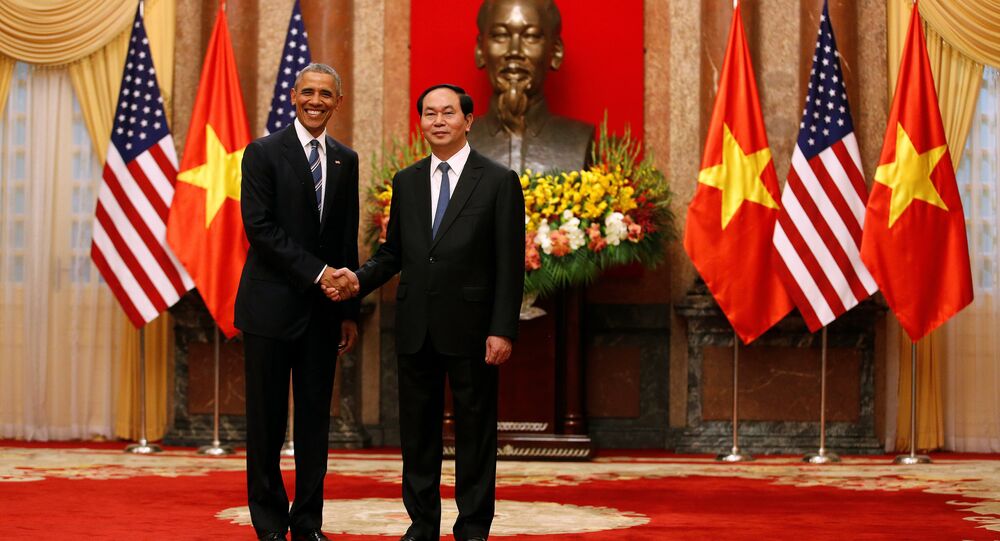 Vietnam Backs US ‘Intervention’ in Pacific Amidst Dwindling Asian Pivot

Top defense officials from Hanoi and Washington met Monday to discuss the role of the US in the region and how Vietnam would respond to American “intervention” in Asia and the Pacific.

As the presidency of Barack Obama winds down, there are lingering concerns over whether the new administration will give proper attention to the US’ Asian pivot — notably, the increasingly aggressive posture taken by Beijing in the South China Sea.

Cara Abercrombie, US deputy assistant secretary of defense for South and Southeast Asia, met with Vietnamese Senior Lt. Gen. Nguyen Chi Vinh, who told Ambercrombie that Vietnam would support a positive US presence in the region.

Deputy Defence Minister, Senior Lieutenant-General Nguyen Chi Vinh said at the time, "It is within our legitimate right to self-defense to move any of our weapons to any area at any time within our sovereign territory."

© AP Photo / Matthias Schrader
Ghosts of Vietnam: US Military Solution in Syria 'Not the Way Forward'

The US tried to cool tensions and encourage diplomacy, with one defense official saying, "We continue to call on all South China Sea claimants to avoid actions that raise tensions, take practical steps to build confidence, and intensify efforts to find peaceful, diplomatic solutions to disputes."

The Japan Times quotes a statement released by the Vietnamese Defense Ministry after the meeting, saying that Vinh "affirmed that Vietnam will support the US and other partners to intervene in the region as long as it brings peace, stability and prosperity," adding that the US does not intend to shift its "rebalance" efforts which seeks to expand Washington’s presence in the Pacific.

Some the traditional US partnerships in the region are also in flux, as President Rodrigo Duterte of the Philippines has been vocally critical of Washington, and relations with Thailand have been strained since the 2014 coup.

Meanwhile the relationship between Washington and Hanoi has become closer since May, when the US lifted its lethal arms embargo on the southeast Asian country. BBC quoted Obama remarking at the time that the embargo decision was "based on our desire to complete what has been a lengthy process of moving towards normalisation with Vietnam… this change will ensure that Vietnam has access to the equipment it needs to defend itself."

Russia, Vietnam Want to Expand Use of National Currencies in Bilateral Trade