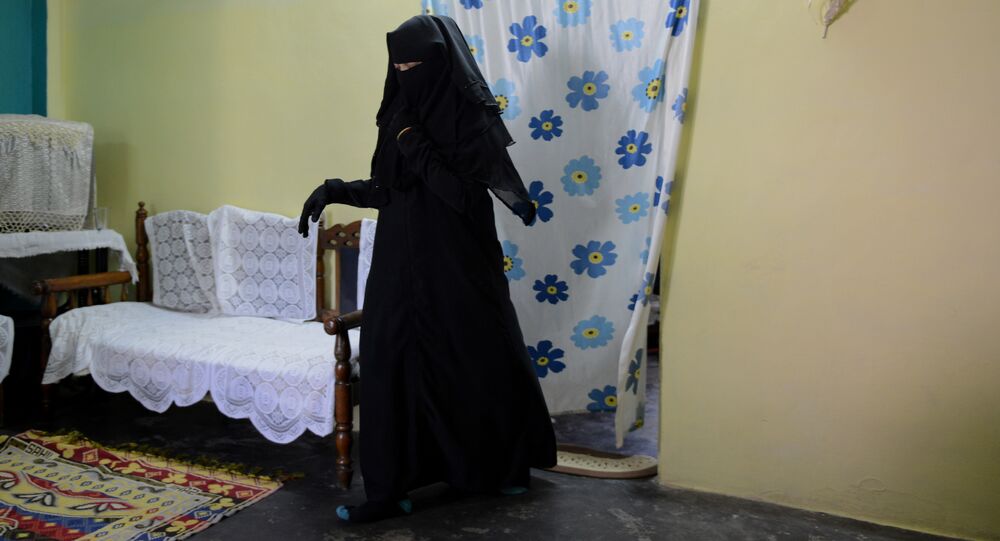 Indian government says that these practices are unconstitutional and un-Islamic.

© AP Photo / Lefteris Pitarakis
‘Misusing Freedom’: Muslim Women in India Demand End to Shariah Courts
New Delhi (Sputnik) – India’s right wing government has opposed the Muslim tradition of triple talaq (instant divorce), and polygamy. This is the first time in India’s constitutional history when the government has submitted before India’s apex court that these practices should be abolished. Triple talaq is a practice among Indian Muslims where men can divorce by simply stating their intention verbally three times i.e. “divorce, divorce, divorce.” Muslim men can utter these words at any time, and by any medium including telephone, text message or even social media post.

“It is submitted that the issue of validity of triple talaq, ‘nikah halala’ and polygamy needs to be considered in the light of principles of gender justice and the overriding principle of non-discrimination, dignity and equality,” reads an affidavit filed by the Central government before the Supreme Court of India.

“The fundamental question for determination by this court is whether, in a secular democracy, religion can be a reason to deny equal status and dignity available to women under the Constitution of India,” it said.

Citing the Indian constitution's power to bestow equal rights to every person including women, the government said, “These Rights are necessary in letter and in spirit not only to realise the aspirations of every individual woman who is an equal citizen of this country but also for the larger wellbeing of the society and progress of the nation, one half of which is made up by women”.

© Sputnik / Andrey Stenin
Muslim School in India Starts 'Anti-Terrorism' Course to Counter Daesh Influence
The Indian government filed the affidavit in response to a petition filed by Muslim women who want the Supreme Court to declare triple talaq and polygamy among Muslims unconstitutional.

More than 50 thousands women supported the signature campaign against this Muslim Personal Law in June this year, which was submitted as a petition before the Supreme Court. In principle, the Indian constitution provides power to different religions to follow their own law in matters related to marriage or family disputes, but if it conflicts with other freedoms, the government can make a decision on one side or the other.

Triple talaq and polygamy is banned in many Muslim dominated countries including Pakistan and Bangladesh.