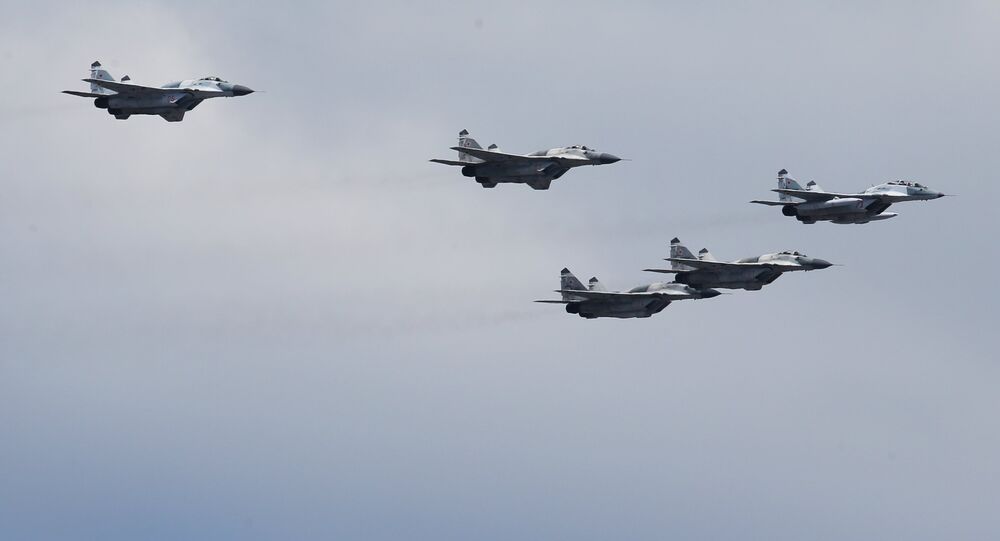 MiGs for Manila: What Happens if Moscow Starts Supplying Philippines With Arms

Earlier this week, Philippines' President Rodrigo Duterte stepped up his anti-US rhetoric, telling President Obama to "go to hell" and saying that if Washington continues to refuse to sell weapons to his country, he can turn to Russia and China. Russian analysts comment on the actual prospects for arms deliveries to the Southeast Asian country.

The conflict between Manila and Washington is intensifying. In a series of speeches earlier this week, President Rodrigo Duterte said that he was ready to "break up with America" and to realign his foreign policy toward other powers because the US "has failed us."

The president also warned that if Washington refuses to sell arms to his country, he could easily turn to Russia and China.

"If you don't want to sell arms, I'll go to Russia." Duterte said. "I sent the generals to Russia and Russia said 'do not worry, we have everything you need, we'll give it to you'…As for China, they said 'just come over and sign and everything will be delivered'."

© Flickr / Benjie Ordoñez
Philippines Defies US, Vows to Pursue Own Interests in Talks With China
The president's latest remarks came following his announcement last month that Manila would be looking to pivot to China and Russia to counterbalance US and broader Western influence. Later this year, Duterte plans to visit both Moscow and Beijing, searching for improved economic and business relations with both powers, including Russian and Chinese investment, particularly in the aviation and telecommunications sectors.

Moscow seems to have been taken aback by Duterte's unexpected overture. On Monday, commenting on Manila's initiative to improve relations, Kremlin spokesman Dmitri Peskov said only that "traditionally, Russia has sought friendly, mutually beneficial and constructive relations with Washington, Beijing and Manila – in all directions."

"The exit of Washington's strategic ally from its absolute influence is consistent with the interests of our country," Aksenov explained. "At the same time, it's important to note that Duterte is not rushing from one ally to another, but looks to maintain a multi-vector policy which is first and foremost in the interests of his own country."

Essentially, the analyst suggested, the president of the Philippines is engaged in bringing a formal end to the former US colony's present status, including in the area of military cooperation. Earlier this week, the president pledged to end joint US-Philippines military exercises. Before that, he warned that he might ask that US to pull its troops out of the country altogether.

© REUTERS / Romeo Ranoco
US, Philippines Launch Possibly Last Joint Military Drills
The Pentagon has tried to put a brave face on a bad situation. Defense Department spokesman Peter Cook responded to Duterte's threats to kick US troops out by saying that the US "will continue to honor our alliance commitments," adding that he "expect[s] the Philippines to do the same." In the meantime, "we will continue to work closely with the government of the Philippines to address any concerns they may have."

The reasons for Washington's pussyfooting are obvious, according to Aksenov: "The loss of the Philippines would create problems for US dominance in the region, strengthening the position of China, which Washington continues to try to restrain by igniting a conflict between Manila and Beijing over disputed islands in the South China Sea." But "now, in connection with Duterte's new course, artificial tensions may disappear, replaced by political pragmatism."

What's more, Washington also has economic reasons for concern – including threats to its plans for the Trans-Pacific Partnership Agreement (TTP), which would ensure US economic supremacy in the region. In the case of the Philippines, Manila's previous policy of supporting the agreement may change, the analyst noted.

"It's also worth noting that Washington will have a difficult time forcing Duterte to change his plans," Aksenov stressed, pointing to the president's 91% 'trust' rating, and 76% approval three months into his presidency, which analysts have suggested is due to his tough approach to the war against narcotics.

Accordingly, in a situation where Duterte is telling Brussels to go to "purgatory," and President Obama to "go to hell," Russia, Aksenov says, had best take advantage of this foreign policy u-turn.

© AFP 2020 / TED ALJIBE
Philippine President Turns to Russia, China Amid Coup Threat and War on Drugs
Speaking to Svobodnaya Pressa, Dmitri Kornev, — editor in chief of the news and analysis portal MilitaryRussia, suggested that that given the Philippines' status as an island nation, Russia, as a major exporter of naval vessels, may be tapped to supply the country with fast boats, shifts and even diesel-powered subs.

Furthermore, if Manila seeks to assert itself in disputes in the South China Sea, it may turn to Russia for air defense systems, including the Buk and Tor medium and short-range SAM systems.

"As far as more modern systems, including the Vityaz and Morphei, they have yet to be introduced in our own military, so the Philippines is unlikely to get them," Kornev explained. "More serious systems – like the S-300, won't be delivered, because their production has been stopped; the S-400 will face the same fate in a year or two, and there is still a queue of orders for them."

"But the supply of aircraft is possible," Kornev added. "At one time, Russia sold MiG-29 and Su-30 aircraft to Philippines' neighbor Malaysia. Over time, we could even supply Iskander-E, which Russia has sold only to Armenia in the past."

For her part, Larisa Efimova, professor of Asian studies at Moscow State University, suggested that President Duterte's foreign policy pivot was only logical, given the history of the country and his own personal background.

"Since the Philippines was a US colony for a long time, Washington pursued a policy of 'Americanization' of the country's socio-political life and mentality. In part, this succeeded. They educated the intelligentsia, which comes from a culture of large landowners of Spanish influence on the one hand (Spain was the Philippines' master for three centuries) and Chinese entrepreneurs on the other."

© REUTERS / Damir Sagolj
Asian Countries Turning Their Back on US, Reaching to China
"This elite ended up coming to power after the Philippines received independence. Duterte became the first 'president of the people', not related to the elite brought up by the US. He does not have Spanish or Chinese blood; ordinary people supported him, preferring him to the…the old elite, because he spoke in a rough and understandable language, and not in English, as his predecessors had. Moreover, as mayor of [Davao] city, he eradicated crime. Now he is spreading this experience to the rest of the country, despite protests from the West."

Ultimately, Efimova suggested, ordinary Filipinos are no longer interested in maintaining the paternalistic relationship between their country and the US. "Duterte deliberately aggravates things, calling his opponents names in order to emphasize the country's independence. He intends to follow further on this course. But in order to counterbalance US influence, he needs Russia. The more great powers are involved, the easier it is to maneuver between them."

Asian Countries Turning Their Back on US, Reaching to China