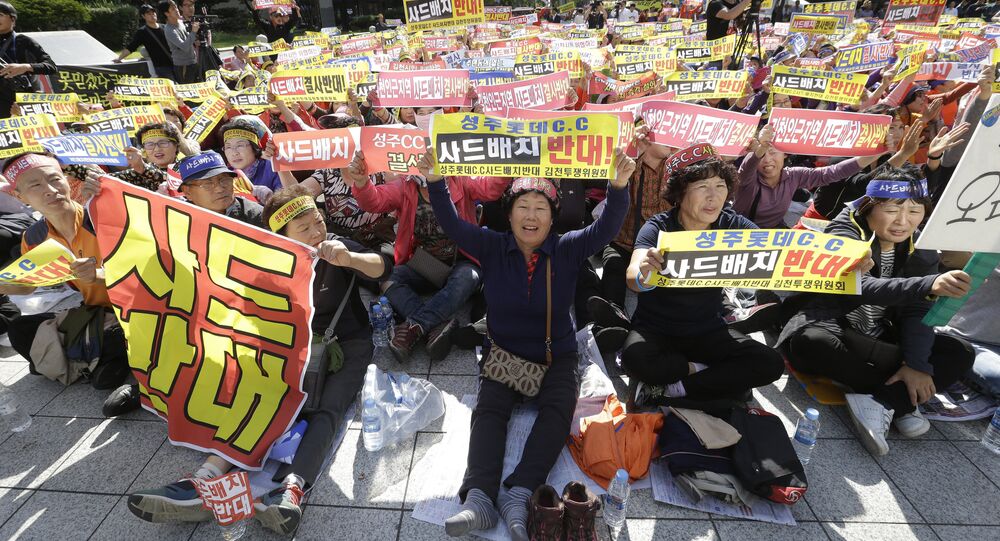 Some 1,000 Residents of S Korea's Gimcheon Rally Against US THAAD Deployment

About 1,000 people from the South Korean city of Gimcheon took part in a rally in Seoul on Wednesday to express their protest against the deployment of the US Terminal High Altitude Area Defense (THAAD) missile defense systems in the Seongju County near their home city, local media reported.

© AP Photo / Ahn Young-joon
South Korean Lawyers Begin Legal Battle to Stop US THAAD Anti-Missile System
MOSCOW (Sputnik) – The protesters oppose the deployment of THAAD battery as from their point of view its AN/TPY-2 radar system may pose a threat to people’s health as well as agricultural crops. They also believe that their region may become a target in case of a military conflict because of the missile defense system.

"We will definitely deliver to the president a message about the agonies of Gimcheon residents," Na Young-min, the co-chair of the group leading the protest said, as quoted by the Yonhap news agency. He sent a letter to President Park Geun-hye demanding to revoke the deployment plans, according to the media.

In July, South Korea and the United States announced that they had agreed to deploy the system in the Seongju County amid increased tensions on the peninsula over North Korea's nuclear and missile program.

No Way Back: THAAD Deployment Not Negotiable, US Says