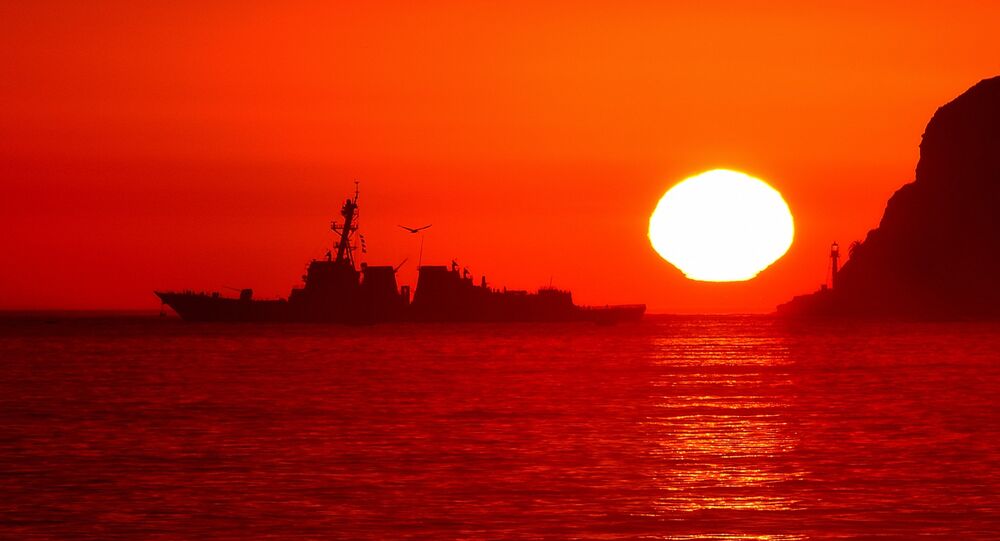 Last Thursday, US Secretary of Defense Ash Carter reiterated the Pentagon's 'Asia Pivot' plans' – highlighting plans to deploy 60% of America's overseas naval and air military assets to the Asia-Pacific region by 2020. Commenting on the Secretary's remarks, Russian analysts work through the hidden logic behind Washington's plans.

Addressing sailors and servicemen aboard the USS Carl Vinson at the US Naval Base in San Diego, Carter recalled that the US began to "quantitatively and geographically enhance the US military's force posture" in the Asia-Pacific region five years ago, in accordance with President Obama's Asia Pivot strategy.

"That's why DoD sent tens of thousands of additional American personnel to the region," he noted. "That's why we committed to homeporting 60% of our naval and overseas air assets in the Asia-Pacific by 2020. That's why we began to modernize our footprint in Japan and the Republic of Korea. And that's why we began to realign our Marines from a highly centralized presence in Okinawa, Japan to additional locations in Australia, Hawaii, and Guam – the latter serving as a strategic hub."

© AFP 2021 / STR
Did the Pentagon Chief Just Reignite South China Sea Tensions?
Hinting at the central reason behind the shift in posture – 'containing' China, Carter took a diplomatic tack, noting only that the US has some "serious concerns with some of China's recent actions…on the seas, in cyberspace, and elsewhere."

Admitting that "the US-China relationship will have elements of cooperation but also competition," the Pentagon chief suggested that the US nevertheless "hope[s] that China chooses the rest of the region in strengthening and upholding the shared principles that have helped so many nations around the region, including China, to rise and prosper."

Geopolitical observer and Svobodnaya Pressa columnist Andrei Ivanov was more blunt. "It's obvious that the reason" for the growing US military presence in Asia "is the consistent growth of Chinese power," he wrote. "At the same time, we can conclude [by the 60% figure] that China, not Russia or Ebola, is the main threat to Washington. That's not surprising," the commentator added.

© Flickr / mashleymorgan
‘Pivot’ Prompts US to Send Newest, Best Weapons to Asia-Pacific - Carter
After all, Ivanov noted, it's obvious to many observers that US global hegemony has already peaked, and that the West's stagnation is contrasted by the rapid development of Asia. In GDP measured by PPP, for instance, China passed the US last year. In nominal terms this is expected to occur in the next few years. "At the same time, the US has a massive external debt, and its financial system, based on the dollar, relies less on physical assets than it does on faith in the greenback."

"But that's not even the main issue," the analyst wrote. "China has more than four times the population of the US, and so there's nothing wrong with the fact that its nominal GDP will be a little higher. The main issue is that the US is beginning to lose its leadership in technology. Previously, China was called 'the world's factory'. While well paid designers, programmers and engineers in Western countries came up with new high-tech products, Chinese workers, paid pennies, produced all the necessities of life for the West's population, from keychains to modern smartphones."

"Today," Ivanov noted, "the situation has changed. China is actively mastering space technology, writing computer programs, and creating the modern means of communication. The country's officials have set the goal of making China the leader in high-tech engineering by 2050."

"In partnership with Russia, which has its own navigation system (GLONASS), and which makes rocket engines for the Americans…China is becoming a real competitor to the US for global supremacy. To be fair, China has never claimed to have such aspirations, but that is the mentality in Washington, which perceives any strong power as a threat to itself."

© AFP 2021 / Toru YAMANAKA / FILES
Beijing Warns Tokyo: 'China’s Military Will Not Sit Idly By' in South China Sea
Another aspect of the mentality of US officials, according to the journalist, "is the willingness to sacrifice anything and everything in order to retain the title of 'exceptional nation'." Unfortunately, Ivanov warned, "if the US will not be able to change global economic trends by economic means, and undermining China from within does not work out, only the option of military force remains."

Asked to comment on Carter's remarks, Pavel Zolotarev, deputy director of the Institute of USA and Canada Studies, told Svobodnaya Pressa that at least for now, the US effort is directed at power projection, not actual warfare.

"Military power is not only used for war," he stressed. "In the contemporary world, troops are needed to implement foreign policy. Today geopolitical aspirations are based on the military factor, similarly to how nuclear weapons have long ceased to be a weapon of war, and have turned into a political instrument."

As far as the Asian deployment is concerned, Zolotarev suggested that "we are talking about the development of a whole mechanism for projecting force in the region, something crucial to the United States."

© AFP 2021 / Saul LOEB MANMAN DEJETO
New Alliances? This Year’s War Games With the US May Be the Philippines’ Last
It's quite simple, according to the analyst. The presence of US troops "may force a state to do something – or the opposite – not to do something. As we have seen, China is creating islands in the region, which come to host elements of its military infrastructure. When necessary, China could send its fleet to the disputed territories. When another fleet is present there, the situation will be different."

Ultimately, the analyst noted that the end result will depend on US policy. "If the US wants to pursue their interests by military means, destabilization awaits the region. However, I think that more than anything, what the US needs is security."