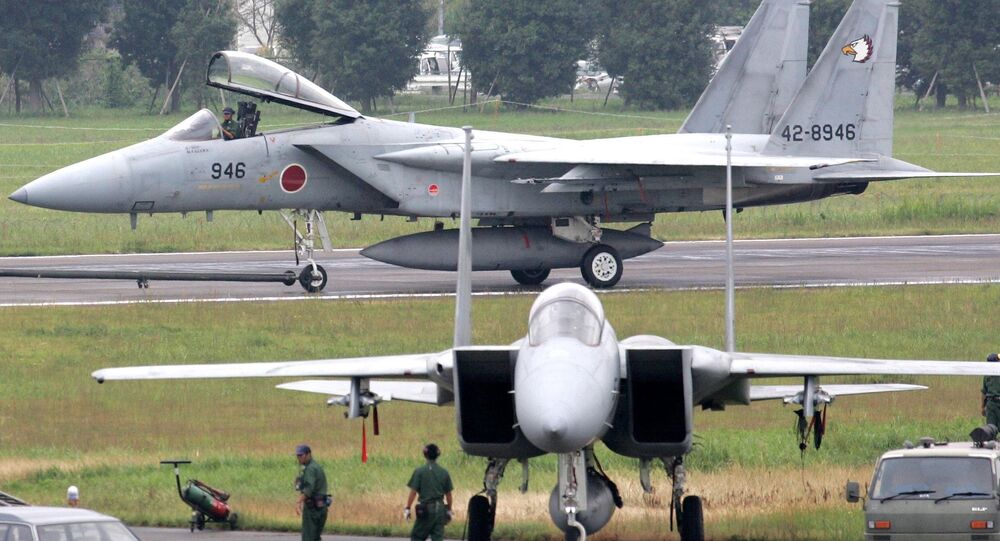 Over 40 China’s H-6K bombers, Su-30 fighter jets and air tankers flew through Japanese islands on Sunday while heading to large-scale military drills in the Western Pacific.

© REUTERS / Kyodo
China Deploys Stealth Drones to Guard Disputed Islands in South, East China Seas
Warplanes of the People's Liberation Army conducted long range drills after flying over the Miyako Strait that lies between the Japanese islands of Miyako and Okinawa, the Chinese Air Force said in a statement.

The jets carried out early warning, sudden assault and aerial refueling exercises, which all aimed to check the forces’ blue-water combat capabilities, according to the Chinese military.

The Miyako Strait sits tightly between Japan’s Okinawa and Miyako Islands, and is one of the few routes that China can use to get into the Pacific. Beijing has been using the strait since May 2015.

© AP Photo / Bullit Marquez
Friends Again? Philippines Announces Joint Drills With US Despite Strain
Despite claiming that the group that flew next to Japanese borders Sunday was massive, the state military noted that the Japan’s airspace wasn’t violated.

The long range drills became the second event of its kind Beijing has undertaken this month. On September 12, some 20 Chinese aircraft flew in the area using the Bashi Channel, which rests between Taiwan and the Philippines.

However, the latest exercises are considered to be the biggest in the recent memory, according to analysts.

“This is very rare – the large number and variety of aircraft have not been seen before,” Beijing-based military expert Li Jie said to South China Morning Post.

Upon flying into ADIZ any aircraft is supposed to identify itself with the Chinese authorities. To “carefully monitor and judge the foreign military aircraft” entering the zone, China began patrols in the area, so it could also “respond to different threats in the sky and to protect national airspace," according to military.

“Regular long range drills in the Western Pacific and patrols over the East China Sea air defense identification zone were for the Air Force to protect China's sovereignty and national security, China's air force spokesman Shen Jinke said, according to a statement posted on the Ministry of Defense website.

The news comes as tensions over territorial disputes in the South and East China Seas are escalating.

Some analysts suggest that China’s latest drills is a message to Tokyo, which has recently declared it is ready to participate in patrols in the South China Sea.

“It is a warning from Beijing to Japan: if you are coming to meddle in the South China Sea, then I’m going to flex my muscles at your doorstep,” Macau-based military analyst ­Antony Wong Dong said to the South China Morning Post.

Recently the relations between China and Japan soured because their standoff over the Senkaku/ Diaoyu Islands in the East China Sea, which they both consider a sovereign territory.