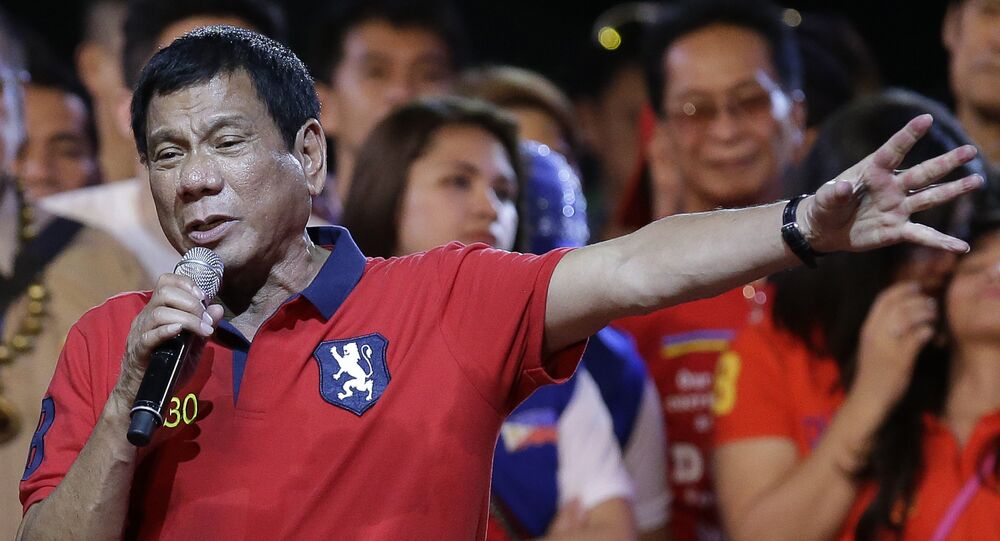 Even though the Philippines’ relations with Japan are warm, those with China have long been soured over territorial disputes in the South China Sea.

© REUTERS / U.S. Navy/Handout
Philippines President Seeks 'Soft Landing' in South China Sea Dispute
Briefing reporters earlier this week President Duterte said that the conflict with China over disputed islands in the South China Sea made no sense and that he would seek closer business ties with Beijing.

In an interview with Sputnik Professor Shen Shishun from the Chinese Institute of International Studies said that it looked like the Philippine president was ready to put the territorial dispute on the back burner and concentrate on promoting closer mutually-beneficial trade and investment cooperation with China.

“Mending bilateral ties could be one of the high points of Mr. Duterte’s visit to China. Despite the ongoing conflict in the South China Sea all the ten ASEAN countries are on good terms with Beijing and their leaders see closer ties with China as key to solving their countries’ economic and social problems,” Professor Shen said.

“China sees the Philippines as one of its biggest adversaries in the ongoing dispute in the South China Sea, and I believe that during their meeting Duterte and Chinese President Xi Jinping will try to minimize the risk of a military confrontation between their two countries. Such a possibility was very high in 2013 and I believe that the Chinese president will be trying to make sure that Manila refrains from doing anything that could provoke a military showdown,” Fenenko said.

“After the Philippines started buying advanced warships from the US Beijing started contemplating a preventive strike to destroy them,” he added.

Washington sees the Philippines as the main element of the anti-China alliance it is now cobbling together to offset Beijing’s rising clout in the Asia-Pacific region. Manila, for its part, is staking on military cooperation with the US in its ongoing territorial dispute with China.

In early September Rodrigo Duterte called his US colleague Barack Obama “a son of a bitch,” after Obama spoke about the loss of over 2,000 lives during the “war on drugs” initiated by the Philippine president.

Moscow-based political scientist Vladimir Yevseyev said that even though Barack Obama will leave the White House in November, the Americans will not forgive such badmouthing of their president.

“The US never forgives anything; it respects force and only force. That’s why, by accusing Washington of meddling with his country’s affairs, the Philippine president actually gave them a reason to topple him,” Yevseyev said.

He added that with bridges with America now all burned, President Duterte had no option left to him other than to seek help from China.

“I think the Chinese are already using their big leverage in Manila to gradually squeeze out the Americans. Now it all depends on how long [President Dutarte] is going to stay in power because the US will apparently be trying hard to destabilize the situation and get rid of him. This is why [Duterte] needs Beijing’s support, and I think this is why he is going to China,” Vladimir Yevseyev emphasized.

Many analysts believe, however, that Washington could advise Tokyo — its main ally in Asia – not to accept Duterte, just like it earlier recommended the Japanese to reconsider planned foreign-minister-level contacts with China amid the ongoing problems in the South China Sea.

The planned visits to China and Japan will be among Rodrigo Duterte’s first overseas trips after he took office three months ago. He is also scheduled to visit Vietnam next week.