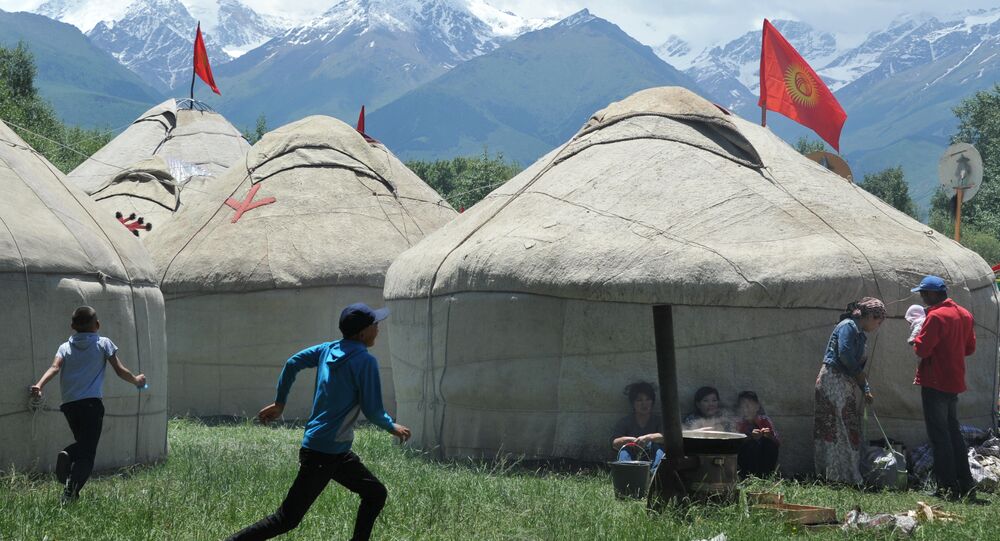 On Thursday, commenting on the upcoming anniversary of the US invasion of Afghanistan, former Kyrgyz President Askar Akaev suggested that Operation Enduring Freedom was only a pretext for US entry into Central Asia. Fifteen years later, the situation is changing, with Russia and China actively working to push the US out of the region.

Speaking to the RIA Novosti news agency, Akayev recalled that "in 2001, President Vladimir Putin, all the leaders of the Central Asian states, and most leaders around the world backed President George W. Bush's call for the formation of an international coalition against terrorism.

© AFP 2021 / WAKIL KOHSAR
US Used Afghan Anti-Terror Mission as Tool for Boosting Regional Influence - Ex-Kyrgyz President
Unfortunately, the former president noted, "eventually, people saw that the Americans have multiple objectives, and that they did not plan to destroy international terrorists everywhere; in some parts of the world, on the contrary, they cultivated terror and used it to reach their geopolitical goals."

In 2001, before the beginning of the invasion of Afghanistan, the US military established military bases in Kyrgyzstan and Uzbekistan. Akayev, who was Kyrgyzstan's president at the time, told RIA Novosti that he eventually came to the realization that the US entered Central Asia to gain a foothold in the strategically important region.

Akayev served as president of Kyrgyzstan between 1990 and 2005. He was ousted in April 2005 in the so-called Tulip Revolution, which the New York Times admitted was made possible with American funding and support. Akayev has characterized the change of power as 'regime change'.

Commenting on the former Kyrgyz president's remarks, Svobodyana Pressa columnist Anton Mardasov recalled that the idea of the US gaining a foothold in Central Asia to encircle Russia and China is "nothing new."

"In this strategy, Central Asia has an important place, as a bridgehead into the 'heart of Eurasia'," allowing the US to "project pressure and military force on Russia, China and the entire Eurasian continent."

Meanwhile, Mardasov noted, a changing of the tide in recent years has helped to erode US influence in the region, forcing Washington to close its base in Khanabad, Uzbekistan and in Manas, Kyrgyzstan.

© Sputnik / Dmitry Astakhov
Acting Uzbek President Nominated for December 4 Poll
Asked to comment on the fluid and shifting geopolitical situation, Central Asia expert Grigory Lukyanov told Svobodnaya Pressa that in the region's history since the collapse of the Soviet Union, US policy has changed several times.

In the early 1990s, he explained, US policy in the region was similar to its policy in other post-communist states, with Washington creating a large-scale program for 'democracy development' and the promotion of market reforms. "In this framework, a variety of non-profits and NGOs began work in these countries," in education, journalism, and other areas. The most striking example of the success of these operations was Kyrzygstan, "where the so-called Tulip Revolution was, in many respects, the result of the work of these kinds of organizations."

At the same time, Lukyanov emphasized that at no point did the US ever reject working with existing governments, many of them built on authoritarian principles. In this regard, the expert noted, US policy in Central Asia was no different than it has been in South America, the Middle East and Africa.

© Photo : YouTube
Daesh Threats to Tajikistan: Bullying Tactics or Real Danger?
"Many of these states signed agreements in the framework of partnership with NATO structures. For a long time, governments in the region cooperated both with Russia (through the Collective Security Treaty Organization) and with NATO." For some time, this approach was thought to be only logical, with countries looking to maximize their security resources to counter domestic threats and those emanating from Afghanistan.

"At the beginning of the 21st century, the situation changed, and Central Asian states became potential allies for the US in its operation against the Taliban in Afghanistan. For this purpose, US bases were built, and broader cooperation began. But this also allowed the US to penetrate more deeply into these countries, which not every government found to be reassuring. Turkmenistan did not allow foreign organizations to work on its territory, Uzbekistan did, but then closed them, and Kazakhstan has kept them under control. On the whole, each country developed a specific mechanism to counter US 'soft power'."

"In recent years," Lukyanov emphasized, "US regional policy has been thrown into confusion. This has to do with Barack Obama's promise to withdraw troops from Afghanistan, something that has proven very difficult. The US is afraid of withdrawing troops completely, because the regime they have built there could collapse." In effect, the expert noted, the US is currently trapped in Afghanistan, "without any real understanding of what they want from the country, or from Central Asian leaders."

Adzar Kurtov, an expert at the Russian Institute for Strategic Studies, told Svobodnaya Pressa that "as a rule, if Americans enter a region, they will not leave voluntarily; the circumstances must exist to compel them to do so."

Accordingly, the analyst explained that "if we were to compare current US capabilities in the region with those which existed in the 1990s, and after they entered, under pretext of getting support for operations against the Taliban, in late 2001, one can confidently say that [US influence] has declined."

At the same time, Kurtov noted that while the growth of Russian geopolitical influence and activity in the region has been an important factor in explaining declining US influence, it has not been the central one. "The fact is that another power – China, has significantly increased its activity in the region."

© REUTERS / Stringer
Great Geopolitical Game: Uzbek President's Passing and the Future of Central Asia
"If in the 1990s China limited itself to exploring the region," in the 2000s and onwards "they began solving issues of delimitation, disputed areas, as they saw them. After that they were able to create the Shanghai Cooperation Organization, and to move from security issues to problems of a political and economic nature."

Kurtov emphasized that the fact that Russia and China have actual borders with the landlocked region certainly helps their chances. "By virtue of this fact, it's difficult for the Americans to establish cooperation, for example, in the area of trade." This is especially true of energy resources, where China, rather than the US, has become one of the largest investors and buyers of Kazakh, Turkmen and Uzbek resources.

Furthermore, the analyst noted, unlike the US, which can only see Central Asia as another overseas extension of American power, China sees the region as crucial to its efforts to create a corridor to Europe and the Middle East, via the New Silk Road initiative. "Solving the problem of improved economic relations with countries in the region, China effectively kills several birds with one stone. First, it ties itself to these states. Second, it establishes new commodity markets in order to build industrial enterprises in Xinjiang. Third, it creates new jobs and raises the living standards in Inner Mongolia and Xinjiang…thus helping to stabilize the situation," to combat terrorism and cool separatist ambitions in western China.

As for Washington, Kurtov warned that they will not give up on their efforts to regain their influence in the region. "Unlike Russia and China, US policy can be quite cynical. They do not have any aversion to working with the opposition, including radical opposition. Their policy is designed in such a way as to try to ensure that whatever situation develops, and no matter who comes to power, they will always have a protégé, complete with a dossier of compromising material."

© Sputnik / Anastasia Raevskaya
From Oriental Bazaars to Soviet Monuments: Five Reasons to Visit Kyrgyzstan (PHOTOS)
In addition, some countries in the region still maintain military cooperation with NATO, with special forces training programs taking place in the United States. The US also continues to work with journalists and local media, and to provide significant investment into local educational institutions. "In this sense China and Russia are behind the US. Russia has several universities, but if one goes, for example, to the American University in Bishkek and the Kyrgyz-Russian Slavic University, the difference in terms of funding is noticeable."

Ultimately, Kurtov suggested that whatever money the US spends in the region, it doesn't compare to the billions that Moscow has contributed through its debt forgiveness programs for Central Asian states. Unfortunately, he noted, the US has a very effective mechanism for advertising its 'generosity', with the local population "watching on TV as the US ambassador distributes humanitarian aid packages to residents in remote villages…" In this sense, Russia has a way to go in learning US PR techniques.