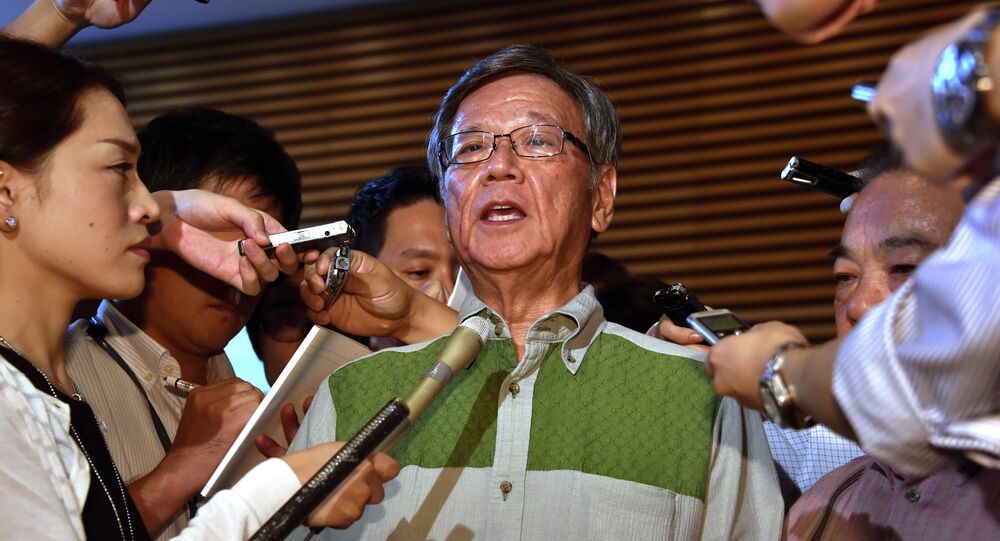 A Japanese court of Friday ruled against Okinawa Governor Takeshi Onaga, who had canceled his predecessor's decision to enable relocation of a US air base within the prefecture, local media reported.

© AP Photo / Emrah Gurel
US Seeking Clarity on Turkey Offering Russia Use of Incirlik Air Base
TOKYO (Sputnik) — According to the Kyodo news agency, the Naha branch of the Fukuoka High Court made a ruling that Okinawa's former government had legally provided the land for relocation of the US air base from Okinawa's highly-populated district in the city of Ginowan to the Henoko coastal area of Nago city.

The relocation decision has met resistance from Okinawa's local authorities, with many Okinawa residents wishing to see the base gone rather than relocated. Okinawa Prefecture Governor Takeshi Onaga convinced the central government to temporarily halt construction in August 2015. In late October 2015, the Japanese government resumed construction of a US military base in Okinawa, having negated a regional government veto on it.

© AFP 2021 / STR / JIJI PRESS
Okinawa Residents Stage Sit-In Protest Over US Helipad Construction
In November 2015, Japanese Minister of Land Keiichi Ishii filed a lawsuit against Takeshi Onaga after the latter refused to fulfill Tokyo's recommendations to accept the relocation of a US base. Okinawa announced it would launch a retaliatory lawsuit against the Tokyo administration in December.

According to the media outlet, if the opposing sides do not reach a compromise, the Supreme Court of Japan will consider the issue and make the final ruling on this case by the end of March 2017.

Okinawa occupies less than 1 percent of Japanese territory but hosts some 74 percent of the country's total US military presence.