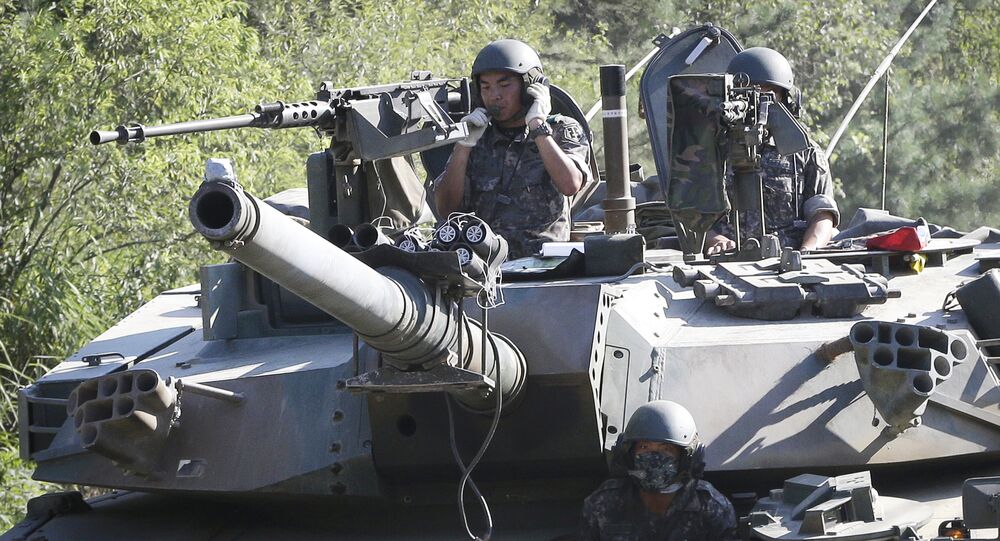 Seoul's Plans to Pulverize Pyongyang 'Nothing But Rhetoric'

South Korea's recent threat to destroy the capital of North Korea was a bluff intended to indicate that the country doesn't depend on the United States for its defense, Georgy Toloraya, head of the Asian Strategy Center at Russia's Institute of Economics , told Sputnik.

© REUTERS / Kim Hong-Ji
How North Korean Nuclear Test Will Affect Pyongyang-Beijing Relations
In an interview with Sputnik, Georgy Toloraya, head of the Asian Strategy Center at the Institute of Economics of the Russian Academy of Science, said that South Korea's recent stern language towards Pyongyang should be perceived as little more than rhetoric to show that it can defend itself independently of Washington.

The interview came after local media reported that Seoul had allegedly developed a preemptive attack plan against North Korea, and that it intended to destroy the northern capital Pyongyang in the event of a nuclear attack emanating from the North.

A South Korean military source told Yonhap News Agency on Sunday that "every Pyongyang district, particularly where the North Korean leadership is possibly hidden, will be completely destroyed by ballistic missiles and high-explosive shells as soon as the North shows any signs of using a nuclear weapon."

© REUTERS / KCNA
Multiple rocket launchers are seen being fired during a military drill at an unknown location, in this undated photo released by North Korea's Korean Central News Agency (KCNA) on March 25, 2016

"In other words, the North's capital city will be reduced to ashes and removed from the map," the source said.

The plan provides for the use of South Korean-made Hyunmoo ballistic missiles, which feature a range of up to 1,000 kilometers (620 miles), to mainly target the North Korean leadership in the event that the north attempts to launch either a nuclear or a conventional war, according to the source.

Commenting on the matter, Toloraya said that all this frightening rhetoric had only been created "for internal use".

"South Korea's statements aim to reassure public opinion by showing that Seoul has the means to defend itself on its own, regardless of the US nuclear umbrella," he pointed out.

Touching upon Pyongyang's promise in July to turn South Korea into "a sea of fire and a pile of ashes" in response to the deployment of a missile defense system near North Korean territory, Toloraya said that this saber-rattling should also be seen as nothing but bellicose rhetoric.

"The propaganda of the North Korean threat does not stand up to criticism. Building up nuclear potential remains their only guarantee that any use of force against them will not be undertaken," he said.

Toloraya also expressed doubt about the effectiveness of sanctions against North Korea, saying that "the past 25 years have shown that the sanctions absolutely do not work" and that a new strategy on North Korea is needed.

According to him, the only way to contain North Korea is to negotiate rather than fight.

"They deliberately up the ante in order to strengthen their position and reach a sort of consensus during the talks, especially with the Americans," Toloraya said.

© AFP 2020 / Kim Jai-Hwan
Bridge of No Return: Seoul Accuses Pyongyang of Planting Landmines on Border
In mid-July, North Korea pledged to turn the South into "a sea of fire and a pile of ashes" after Seoul and Washington moved the Terminal High Altitude Area Defense (THAAD) anti-missile system to the Korean Peninsula to counter the potential threat from Pyongyang.

Last Friday, North Korea confirmed that it had carried out a nuclear test in the country's northeast. The blast is believed to have been the fifth and largest since Pyongyang began pursuing nuclear and ballistic missile programs, drawing condemnation from the international community.

In response to the test, the South Korean Defense Ministry presented the Massive Punishment and Retaliation (KMPR) concept, which reportedly contains plans to annihilate sections of the North Korean capital.