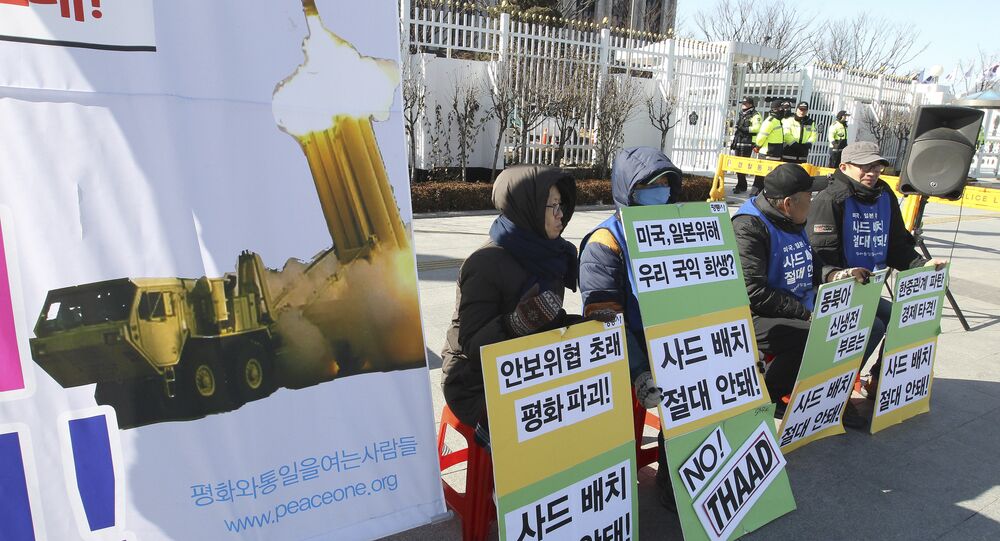 On Monday, speaking with his South Korean counterpart, Chinese President Xi Jinping emphasized that China was categorically opposed to the deployment of US missile defense in South Korea. Commenting on the president's remarks, Russian and Chinese political analysts told Sputnik what it is specifically that China is concerned about.

© REUTERS / Nicolas Asfonri/Pool
Xi Expresses Opposition Over US Missile System Deployment in S.Korea in Talks With Park
Speaking with South Korean President Park Geun-hye in Hangzhou, China on the sidelines of the G20 Summit, Xi warned that the "improper resolution of this issue will not help ensure strategic stability in the region, and may exacerbate existing conflicts."

Park, in turn, responded by pointing out that in 2016 alone, North Korea has carried out another nuclear test, together with a series of missile tests. Accordingly, she suggested, it is Pyongyang's military 'provocations' which have undermined stability in the region, and posed a challenge to relations between Seoul and Beijing.

The meeting between the two countries' leaders came against the background of tense relations between Beijing and Seoul, with China concerned over South Korea's agreement to deploy the American Terminal High Altitude Area Defense (THAAD) anti-ballistic missile system in the south of the country.

© AP Photo / Ahn Young-joon
N. Korea Launches Three Ballistic Missiles in Direction of Sea of Japan
On Saturday, speaking before the Eastern Economic Forum in Vladivostok, Park called on North Korea's neighbors, including Russia, to assert their influence over Pyongyang. In response, Russian President Vladimir Putin said that it was necessary to act cautiously, so as not to provoke North Korean leaders in taking measures that they see as the protection of their national security. An aggravation of the situation would be counterproductive, and it's necessary to return to multilateral negotiations, Putin emphasized. At the same time, he added that Moscow still has some channels of communication with Pyongyang, and will use them to attempt to reduce tensions.

Also on Saturday, President Xi met with US President Barack Obama. The two men discussed the North Korean issue. Xi reiterated the position that Beijing is fundamentally opposed to the deployment of THAAD in Korea, and urged Washington to respect China's strategic security interests.

The US made the decision to deploy its THAAD ABM system in South Korea in July.

Speaking to Sputnik, veteran military expert Vladimir Evseev laid out the contours of Beijing's concerns, and what China expects to gain by pressing Washington and Seoul not to deploy THAAD in South Korea.

"According to the information we have at the moment, the US will only be deploying one THAAD battery [in South Korea]," the expert noted. "This battery is meant to defend US military facilities, not Seoul. I think that this was discussed at the meetings Xi Jinping held with Park Geun-hye and Barack Obama."

"Secondly, it is possible that the US may deploy other systems in South Korea," Evseev noted. "That is, THAAD may be only the first element. Specifically, a ground-based version of the Aegis system, like the one in Romania, could be deployed [in South Korea]. In other words, China is now looking to stop the further deployment of US missile defense…and the deployment of American offensive weapons which will affect China's security interests. The idea is to prevent unfavorable developments from taking place, since this would force China to respond [in kind]. China is being drawn into an arms race, and considers it necessary to stop it."

For his part, commenting on Washington and Seoul's likely response to President Xi's warnings, Wang Junsheng, a research fellow at Beijing's National Institute of International Strategy at the Chinese Academy of Social Sciences, told Sputnik that it was very difficult to guess at the moment precisely how the US and South Korea would respond.

"It's very difficult to assess whether Seoul and Washington will continue to hold their horse at the edge of the abyss, or whether they will reverse their decision on the THAAD deployment," the analyst noted.

© Sputnik / Àngel Monlleó
'Without Nuclear Weapons North Korea Would Have Long Become Another Syria or Iraq'
In any case, the meetings themselves hold a crucial importance, according to Wang, particularly the one between presidents Xi and Park.

"During a key period of development of China-ROK relations, the senior leaders of the two countries are communicating directly…At the meeting, Xi Jinping stressed that China and South Korea are neighbors, and have broad common interests, including joint economic development and the promotion of regional peace…"

"In addition, there is an extensive set of arguments – both bitter and sweet ones, [that China can use] to persuade South Korea to take the right track – to reduce the negative factor, to respect [China's] core interests, to find common interests despite existing differences…Future development will depend on the political wisdom of South Korean leaders on this issue," Wang concluded.

Xi Expresses Opposition Over US Missile System Deployment in S.Korea