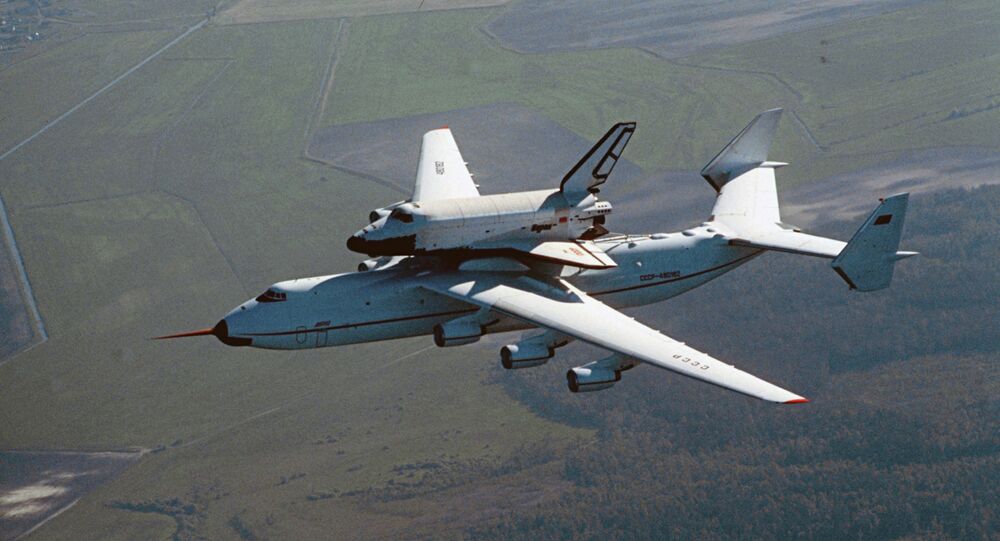 A Chinese company is set to purchase the largest aircraft constructed by Ukrainian holding company Antonov, similar to the AN-225. Russian military expert Vasily Kashin discussed with Sputnik the importance of this purchase for both countries.

“On August 30, Antonov [Company] and Aerospace Industry Corporation of China (AICC) signed an agreement on cooperation on the AN-225 project,” Antonov’s press service said in a statement, UNIAN news agency reported.

Negotiations between the two corporations have been held since May 2016 and the deal was signed on August 30 in Beijing.

But according to Vasily Kashin the deal between Antonov and Airspace Industry Corporation of China (AICC) is hardly sensational.

“The deal fits into a conventional model of China acquiring technologies for military use and for Ukraine it’s a deal with a small import-export intermediary firm. AICC should not be confused with the Aviation Industry Corporation of China (AVIC) which is a giant in the Chinese aviation industry,” the expert explained.

AICC was established in 2010 and is based out of Hong Kong.

Representatives of Antonov Company told UNIAN that each stage of the project will be implemented under a separate contract. The two companies did not reveal any further details about the agreement and said nothing about the project deadlines or the planned numbers of the AN-225 aircraft set to be built in China.

Currently, there is only one AN-225 in existence, built in 1988. It belongs to Antonov holding and is used for commercial shipping of especially large cargo. The second airplane is 70% completed.

East News/ Xinhua News
'Heavenly Palace': China to Launch Two Manned Space Missions This Fall
The military expert pointed out that the construction of the airplane is set to be done in the city of Suzhou (Sichuan province). It has been nearly 30 years since the production of the first AN-225 was done and as Kashin pointed out the manufacturing process of the new airplane still remains unclear as no details have been given out.

Kashin also said that the AN-225’s engines were earlier made by the Ukrainian company called Motor Sich. But now it has been several decades since the construction of the first airplane was completed. How quickly can they resume full-scale production is extremely dubious.

In May, Antonov’s deputy head said that Ukraine had been considering launching a joint manufacturing production with China and was planning to invite Chinese investors to the project.

On Wednesday, Antonov refused to make any comments on the deal and said that it will publish additional information about the negotiations with the Chinese company later, after its delegation returns from Beijing.

According to Kashin what is most likely to happen is that the AN-225 will be bought by the Chinese government through an intermediary company. The aircraft will join the PLA Air Force and the aircraft’s engineering documentation will be passed on to AVIC.

© Sputnik / Vladimir Astapkovich
Sukhoi Aircraft: All Creations of the Legend of Russian Aviation
Back in the Soviet Union the AN-225 was developed with a clear and specific purpose. The plane was supposed to become a part of the Soviet space program.

It is known that the Chinese are extensively working on space technologies and launch vehicles. They are collaborating on creating various space shuttles and space planes. Construction of large transport aircraft with 6 engines is also underway.

It is possible that the new AN-225 will serve as a part of the Chinese space program, Kashin speculated.

According to him the documentation of the AN-225 which China plans to acquire may serve as a guide to constructing smaller space shuttles or aircraft such as the AN-124 or US C-5A Galaxy.

However, today the production and design capabilities of Antonov, have deteriorated to such an extent that its main assets are Soviet technical files. According to Kashin, the assets are losing value over time, thus, a deal with China is of utmost necessity for the Ukrainian company.

AN-225 is currently the biggest aircraft in the world, with a takeoff mass amounting to 640 tons and a working load of 250 tons. It was developed in the former Soviet Union in the 1980s and was initially designed as a carrier for the Soviet Buran (Snowstorm) space shuttle.

The only existing AN-225 aircraft took its first flight in 1988 and is now operated by Antonov Airlines, which is a part of the Antonov Company.