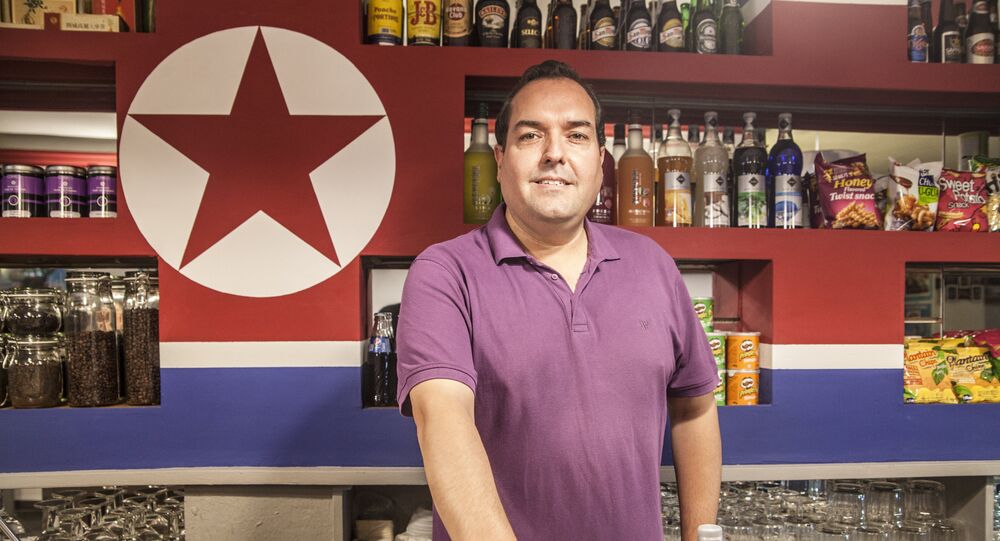 Without its nuclear program North Korea would have long repeated the fate of Syria or Iraq, Alejandro Cao de Benós, a representative of the Korean Friendship Association, said in an interview with Sputnik.

Even though born 10,000 kilometers from Pyongyang, Alejandro Cao de Benós has spent 20 years of his life trying to improve North Korea’s shattered image and is known in his native Spain as maybe the only person around ready to defend Pyongyang and its political system on the seas, on land and on Twitter.

When asked how and when he had decided to represent North Korea in the world, he said that he considered himself as a Communist when he was 16.

“Learning about several North Korean families living in Madrid, I realized that I wanted to live in their country and make my contribution to their revolution,” Alejandro noted.

He added that he had come to like the Juche ideology  authored by President Kim Il-sung, along with the country’s culture, philosophy and spirituality.

Café Pyongyang that opened in Tarragona, Spain,  several months ago, also serves as the headquarters of the Korean Association of Friendship in Spain.

“This is our first such outlet abroad where people can feel enjoy the typical Korean atmosphere, read Korean magazines and enjoy our tea and beer. Everyone willing to know more about North Korea is welcome to come in,” he said.

© Sputnik / Marc Bennetts
How to Stop Worrying: Why Pyongyang’s Nuclear Tests Are Less Dangerous Than the Panic They Cause
When asked what North Korea would look like 25 years from now and whether North and South would even become one again, Alejandro said that “in 25 years' time North Korea may become a highly developed, futuristic country while preserving its socialist system and economic self-sufficiency as an alternative model for countries  suffering the “horrors of capitalism.”

He added that North Korea will not emulate the capitalist model that currently exists in China because this would be the end of the country’s socialist system and independence.

“The country will reunite, I’m sure about this. We are already on the way to reunification and it now depends on the people of South Korea who should elect a progressively minded president who would not be dependent of the US,” he noted.

When asked about the reason why Pyongyang had decided  to develop its own nuclear arsenal, he said that the “nuclear program is the guarantor of the country’s existence. Without it the country would have become another Iraq, Libya or Syria, which have lost their culture, resources and their future."

Mentioning the oft-repeated Western accusations of alleged human rights violations in North Korea, he said that it was part of the lies being spread by the CIA and US propaganda.

© Sputnik / Andrey Ivanov
N Korea Inside View: Pyongyang Responds to Western Sanctions With Skyscrapers and Grand Subway (PHOTOS)
He heaped praise on Kim Jong-un whom he described as a true follower of Generalissimo Kim Il-sung’s behests.

“He is working for the sake of the people, to defend the revolutionary gains and ensure the country’s economic and technological progress.”

Speaking about North Korea’s relations with Russia, he described them as rooted deep in the past when the Red Army was fighting hand in hand with the Korean People’s Army against the Japanese imperialists, when Josef Stalin was helping the country in its struggle against imperialist America.

He explained the Unidos Podemos Party’s poor showing during the recent elections in Spain by the lack of ideology and discipline.

“The current split of the left movement stems from their individualism which prevents them from listening to authority and maintaining discipline,” he emphasized.

He added that the movement for the independence of Catalonia was doomed from the very beginning because it tried to tap middle class  disillusionment with capitalism.

"The idea of an independent Catalonia was supported by some of our media outlets and local oligarchs willing to have their own kingdom without doing nothing for the ordinary people.As a Communist, I believe that the Spanish working class must work to root out capitalism, not to enflame hatred between Spanish and Catalan families who have lived side by side for so many centuries,” Alejandro Cao de Benós said in conclusion.