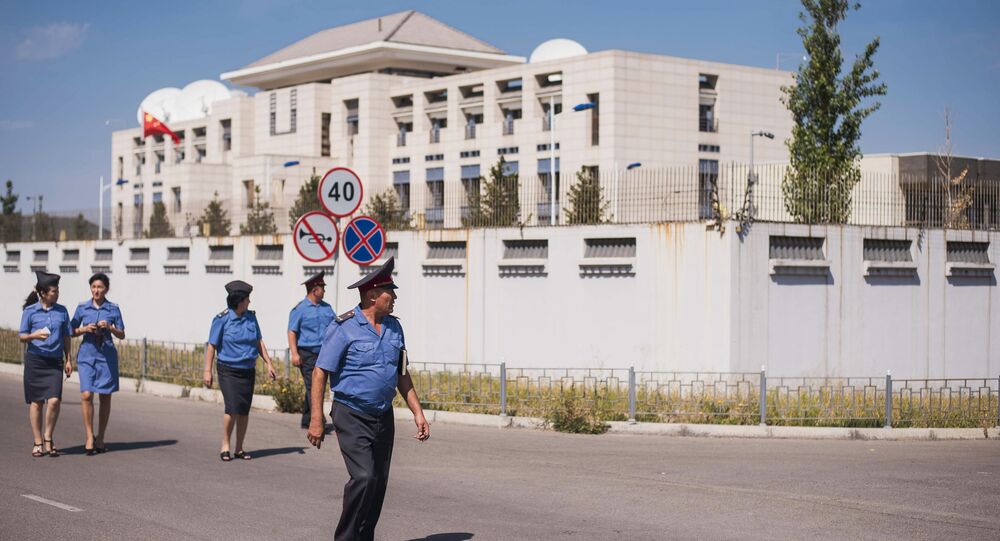 An attack on the Chinese embassy in Bishkek, the capital of Kyrgyzstan on Tuesday morning is an alarming signal. The negative scenarios for further developments in Central Asia, which have long been the cause of concern both for Russia and China, are now gradually materializing, military expert Vasily Kashin told Sputnik.

On Tuesday morning, a suspected suicide car bomber rammed the gates of the Chinese embassy in the capital of Kyrgyzstan.

Local medics said the driver was killed while two embassy staff and a woman were wounded.

Commenting on the attack, military expert Vasily Kashin told Sputnik that the activity of anti-Chinese Islamist radical groups operating in Central Asia has been a long-term cause of concern for the Chinese authorities.

China has established cooperation with the governments of all countries of the region in the fight against Uighur separatists and terrorist groups.

However the weakness of the special services and of the state institutions of the Central Asian countries, in Kyrgyzstan in particular, comes as a serious restriction for the further development of this cooperation, the expert said.

The terrorist cells mostly organized by the natives of China’s Xinjiang Uyghur Autonomous Region have found shelter in Kyrgyzstan.

However economic difficulties do not allow the country to set up effective and powerful structures capable of fighting against terrorism.

This, in turn, allows the adherents of the radical movements who come from China to obtain legal status relatively easily by acquiring fake documents and to start recruiting new members.

Kyrgyzstan’s close ties with its nearest neighbors and with Russia provide them with opportunities to enter other countries.

© REUTERS / Ng Han Guan/Pool
G20 to Be Held Successfully Despite Chinese Embassy in Kyrgyzstan Recent Attack
With the appearance of Daesh, many of the country’s residents began fleeing into Syria and Iraq to join the military operations on their territories. Sometimes they leave with their whole families.

According to local estimates, the expert says, up to 500 Kyrgyz nationals are fighting among the ranks of Daesh jihadists.

The threat of Daesh militants returning, nationals of post-Soviet states, back to their homelands has become one of the main reasons for Russia’s military operation in Syria.

Simultaneously with the deterioration of the situation in Kyrgyzstan, the underground terrorist cells have recently become more active in China.

The geography of their activities has largely expanded and the frequency and the scale of their terrorist attacks has intensified.

The attack on the Chinese embassy in Bishkek is an alarm bell, signaling the serious deterioration of the situation in the region, Kashin said.

The negative scenarios for the further developments in Central Asia, which have long been the cause of concern both for Russia and China, are now gradually materializing, he added.

The elderly generation of authoritative leaders is gradually quitting, economic and demographic problems are mounting and the popularity of radical religious movements is growing.

In the current situation in Central Asia, the security of the region is stepping in front of its economic interests.

Russia and China should establish maximally close cooperation, refrain from unproductive rivalry and be ready to promptly react to new sudden crises in this region.

Special responsibility now rests with the regional anti-terrorist structure of Shanghai Cooperation Organization (SCO) and The Collective Security Treaty Organization (CSTO), who should prevent destabilization of the region through close cooperation with all its states.

China to Strengthen Regional Cooperation After Blast at Embassy in Kyrgyzstan