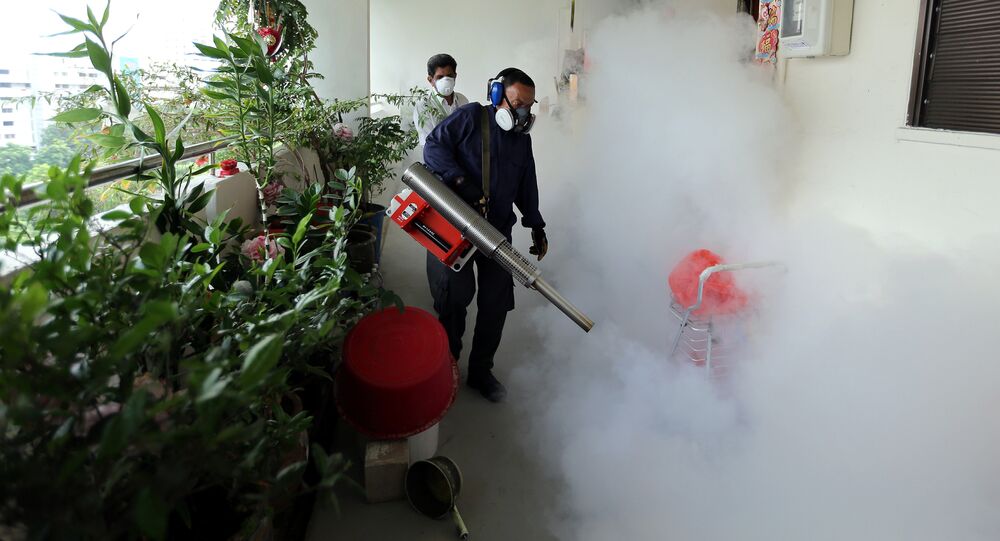 The Ministry of Health confirmed 41 cases of locally transmitted Zika virus infection in Singapore, according to official statement.

"The Ministry of Health has confirmed 41 cases of locally transmitted Zika virus infection in Singapore. Of these cases, 36 were identified through active testing of potentially infected persons… They are not known to have traveled to Zika-affected areas recently, and are thus likely to have been infected in Singapore. This confirms that local transmission of Zika virus infection has taken place," the ministry said in a statement, posted on its website.

According to the statement, 34 have fully recovered, while the other seven, who still have symptoms and are potentially infectious, are currently recovering at a hospital.

© AFP 2020 / MARVIN RECINOS
University of Warsaw Confirms First Cases of Zika Virus in Poland
All the confirmed cases are residents or workers at a single construction site, the Aljunied Crescent/Sims Drive area.

The ministry pledged to continue screening of the close contacts of confirmed cases, and continue to carry out Zika tests on those working at the affected facility and its neighborhood.

The current Zika outbreak started in Brazil in the spring of 2015. It has since spread across the Americas, with cases having been reported in European and Asian countries as well.

The virus is spread by the Aedes mosquito, which is common in tropical areas. Zika does not cause serious complications in adults, but is suspected of leading to severe brain defects and cases of microcephaly in newborns.

Most US Citizens Are Not Afraid of Catching Zika Virus, a Poll Reveals