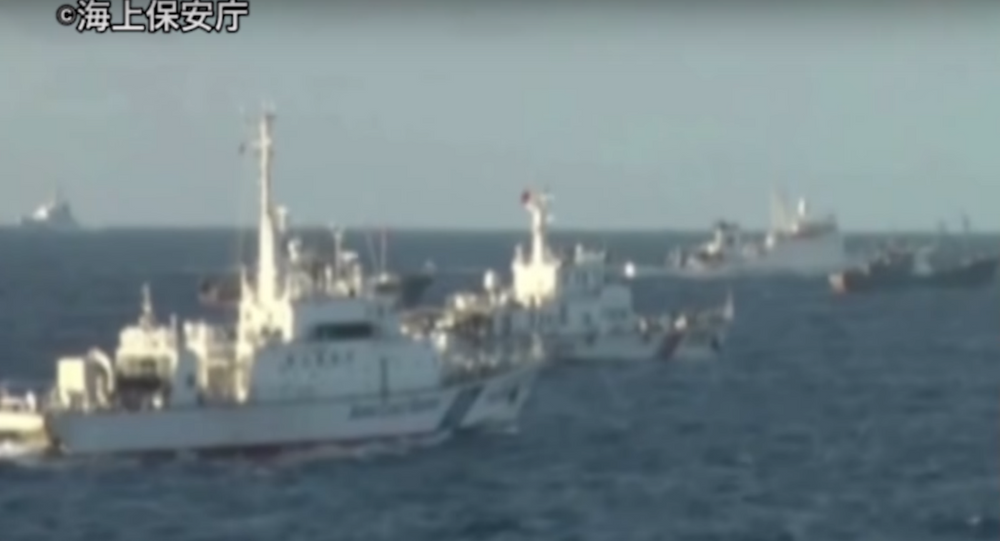 Over the weekend, reports surfaced that Tokyo has plans to develop new land-to-sea missiles to be deployed to the southernmost point of Okinawa prefecture. With a range of 186 miles, the projectiles could easily reach the Senkakus.

On Monday, the Japan Coast Guard released footage that claims to show these provocations.

"Your ship has intruded into the territorial waters of our country," says an electronic message sent from the Japanese patrol ship Aguni to one of the Chinese vessels, according to the Japan Times.

"Non-innocent passage in the Japanese waters is not allowed. Get out of this area immediately."

According to a statement released by the Japan Coast Guard, 18 Chinese vessels were equipped with machine guns.

"Actions by the Chinese side like this, which will escalate the situation, is not tolerable," the statement said.

Beijing claims ownership of the islands, which are known in Chinese as the Diaoyus, dating to their discovery in the 14th century. Tokyo maintains that it formally owned the chain between 1895 and the end of the Second World War, when they were ceded to the United States until being returned in 1971.

The islands are believed to be rich in energy resources.

Japan has sided with the US and its Pacific allies in territorial disputes in the neighboring South China Sea, where the Hague-based Court of Arbitration recently rejected Beijing’s nine-dash line claims.