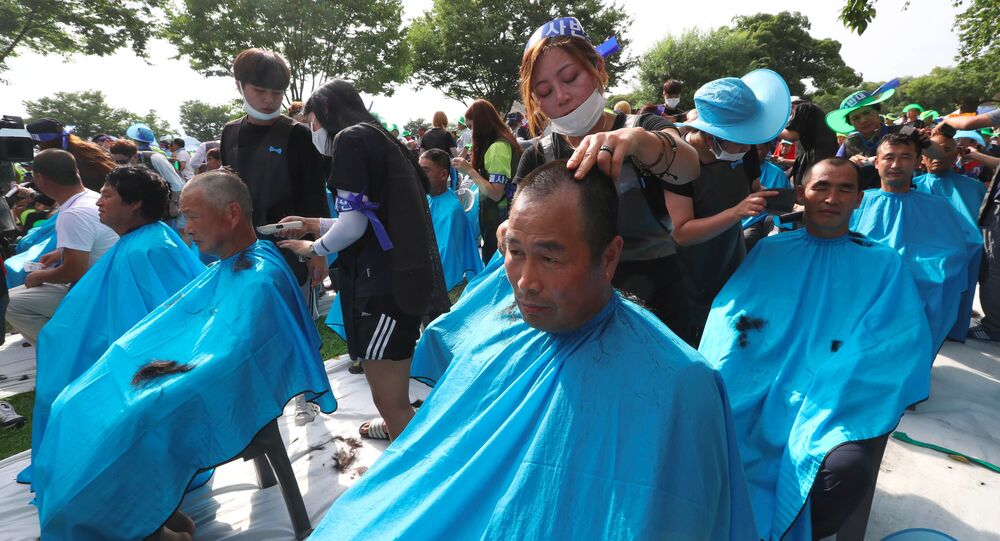 Over 900 residents of Seongju, located in the eastern North Gyeongsang Province in South Korea, shaved their heads in order to protest against deployment of the US Terminal High Altitude Area Defense (THAAD) missile defense system, according to local media.

Earlier in the day, South Korean President Park Geun-hye urged North Korea to stop the development of its nuclear program and provocative international policies against the South, and defended the deployment of THAAD over the alleged threat from the North. The move comes after North Korea fired a ballistic missile from its eastern shore on August 3. The country had previously carried out multiple missile and nuclear tests in violation of UN Security Council resolutions.

Over 900 residents of Seongju, located in the eastern North Gyeongsang Province, had their heads shaved in a local park in a show of determination while chanting "we need to show our determination in order to stop THAAD," the Channel NewsAsia reported.

© REUTERS / Kim Hong-Ji
Seoul May Consider New Site for THAAD Amid Local Residents' Protests
Several opposition lawmakers have joined the protest, according to the news outlet.

Opponents of the missile defense system have reportedly voiced health concerns over the system's powerful radar, as well as the potential danger of being targeted while living in proximity of THAAD.

Seoul and Washington agreed to place the THAAD system in July. The system is designed to intercept short, medium and intermediate ballistic missiles at the terminal incoming stage. Its deployment to Seoul has caused concerns in North Korea, as well as China and Russia.