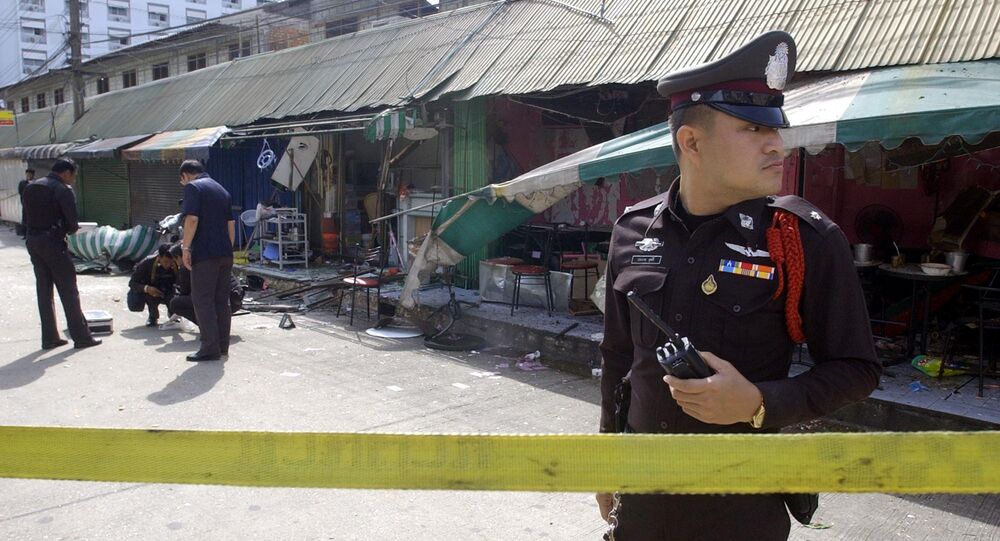 A senior law enforcement source said that multiple explosions that occurred in Thailand on Thursday and Friday, killing at least three people and injuring over a dozen, could have been staged by Islamist insurgents from the country’s south.

BANGKOK (Sputnik) – Multiple explosions that occurred in Thailand on Thursday and Friday, killing at least three people and injuring over a dozen, could have been staged by Islamist insurgents from the country’s south, a senior law enforcement source told RIA Novosti.

"The first results of the investigation into the series of blasts suggest that they were prepared by Islamist separatist militants operating in the far south of Thailand, in the Narathiwat, Yala and Pattani provinces," the source said on Friday.

On Friday morning, two explosions occurred in the southern city of Surat Thani, two on the Phuket Island, and two in the Hua Hin resort. Later, two more explosions were reported in Thailand’s Phang Nga Province. At least two people were killed and at least four others were injured as a result.

"The material in the explosive devices, the arrangement where two consecutive blasts occur, the second to harm the law enforcement members who arrive to investigate the first explosion, remote detonators in the form of mobile phones – all this is the style of militants that the security forces have to deal with in the far south every day," the senior law enforcement source said.

A series of suspicious fires were also reported at several locations early on Friday, which is a national holiday in Thailand (Her Majesty the Queen’s Birthday and Mother’s Day).

The law enforcement source told RIA Novosti that this is the first time such a large-scale attack is carried out in Thailand’s south.

Thailand's southern-most Narathiwat, Yala and Pattani provinces are majority-Malay and predominantly Muslim. The southern region has seen a low-level insurgency since the 1940s, but violence escalated in the early 2000s, claiming over 6,500 lives in the course of more than ten years.

The separatists do not want to be part of the predominantly-Buddhist Thailand and want to restore the formerly semi-independent Sultanate of Pattani that had acted as a buffer zone between the British Malaya (now Malaysia) and the Kingdom of Siam (now Thailand) but was incorporated into the latter as a result of the Anglo-Siamese Treaty of 1909.

At Least 8 People Injured in Bomb Attack in Southern Thailand